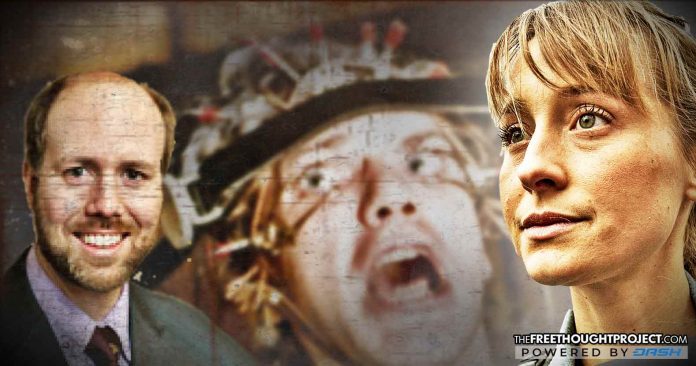 New York, NY – Dr. Brandon Porter, a physician described as the resident doctor to the NXIVM sex trafficking cult, has been charged with conducting illegal human experiments by the New York medical oversight board.

The decision by the New York Department of Health comes after they initially refused to act on a complaint from former cult member Jennifer Kobelt, who claimed that she was forced to watch graphic dismemberment and rape videos as part of an alleged “fright study” Porter was conducting.

Kobelt, in her August 2017 complaint, alleged that Porter may have conducted his “fright study” on as many as 100 people.

“He continued to film my reaction for at least 10 minutes as I just sat there, dry heaving like I was going to puke and crying very hard,” Kobelt said in her complaint to the Health Department, adding that Porter began showing her the violent images without warning, according to a report from the New York Post.

“He failed me, not only as a friend but as the medical practitioner I had trusted on numerous occasions with my health while I was in New York,” Kobelt said in the complaint.

Amazingly, in a Sept. 6, 2017, letter to Koblet, the state Office of Professional Medical Conduct (OPMC) explained that they would not investigate Porter, specifying that “the issues you have described are not medical misconduct.”

Apparently, now that the public spotlight is on the NXIVM cult, the OMPC has changed its tune, as the New York Post reports that Porter is now accused of moral unfitness, gross negligence and gross incompetence among other charges.

Porter is accused of showing “human subjects an actual video of the horrific and brutal murders and dismemberment of four women by machetes; and violent film clips, including a male African American being viciously stomped by a Nazi; a conscious male being forced to eat a portion of his own brain matter; and a graphic gang rape.”

The Free Thought Project has been closely following the developments of this story, and last week reported on connections between the celebrity sex cult and its billionaire backers. Although largely ignored by mainstream media, the alleged leaders of the organization, Keith Raniere and Smallville actress Allison Mack, were not just arrested for human trafficking—but were arrested and charged with slavery and child sex trafficking.

There is a growing body of evidence suggesting that rather than being a simple self-help group as NXIVM members proclaim, or even a sex cult as the mainstream media suggests, the group may actually be a front for an elite-based child sex trafficking ring—as the group’s ties have been revealed to extend to numerous power-elite ruling class families, including the Bronfmans and Clintons.

With alleged leaders Raniere in jail and Mack out on bond with conditions that include not having contact with other NXIVM cult members, Clare Bronfman has allegedly taken on the role of leader within the organization. Bronfman and her sister, Sarah, are alleged to be the primary financial backers of the cult, funding the organization with hundreds of millions of dollars. The Bronfman sisters are heirs to the Seagrams liquor fortune.

The charges against Mack accuse her of working in a quasi-management position within the organization. The complaint alleges that as second-in-command, Mack served as a recruiter who worked to lure women into the purported self-help program as a means of convincing them to sign up for the “advanced program” called Dominus Obsequious Sororium, which required women to essentially become subservient to Raniere.

Dominus Obsequious Sororium is a quasi-Latin phrase that roughly translates to “Master Over the Slave Women.”

“As alleged in the indictment, Allison Mack recruited women to join what was purported to be a female mentorship group that was, in fact, created and led by Keith Raniere. The victims were then exploited, both sexually and for their labor, to the defendants’ benefit,” U.S. Attorney Richard P. Donoghue said in a statement.

Women within the Dominus Obsequious Sororium were then allegedly required to give Raniere blackmail in the form of nude pictures or damaging information to be used to keep women from speaking out if they left the group. They were also forced to sign over their finances, maintain weight requirements and even be surgically branded with a symbol that included Raniere’s initials.

As TFTP reported in November 2017, “the cult was finally exposed when the daughter of former Dynasty actress Catherine Oxenberg became a member. Oxenberg told the New York Times that she became concerned after she saw that her 26-year-old daughter India was extremely emaciated from dieting and was suffering from serious health problems.”

Once the accusations against NXIVM became public, numerous other women, including actress Sarah Edmondson, came forward to all to tell the same story of the blackmail, branding, forced labor, and sexual slavery.

Porter has a hearing set for June 27, and if the charges against him are substantiated he could face suspension or revocation of his medical license. Upon resigning from St. Peter’s Hospital in Albany last fall, Porter reportedly fled town. The Post reports that the New York Health Department would not comment on the OPMC’s action and Kobelt declined to comment.