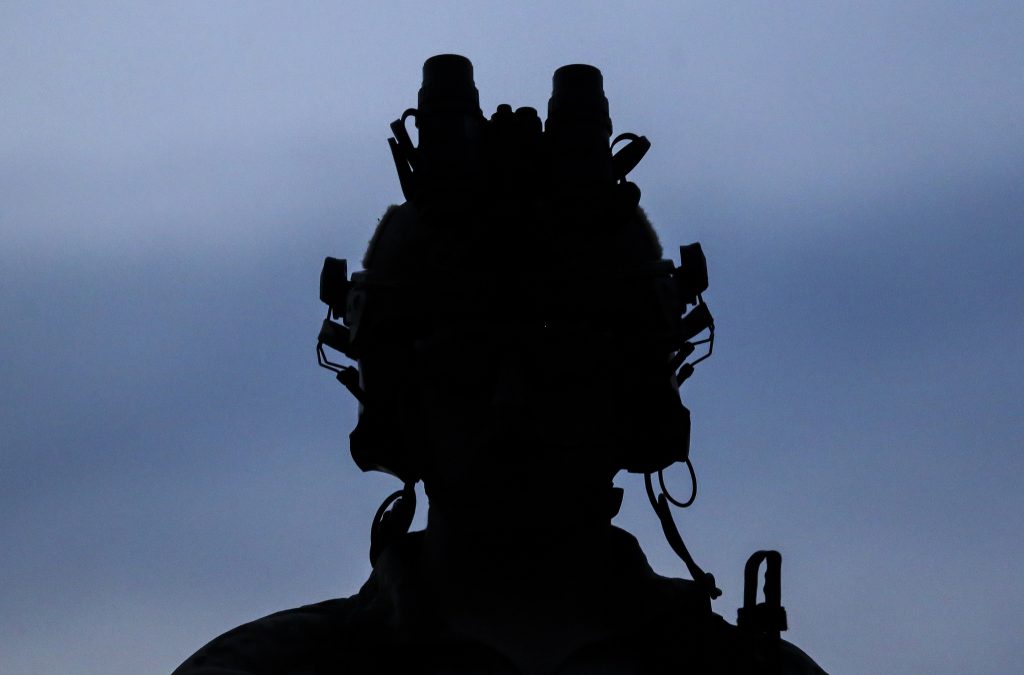 The massive weapons and equipment cache was discovered by officers who made entry into room #521 using a cleaning services room key around 4 p.m. after Bradley called 9-1-1 and claimed that his room which he admitted contained a firearm may have been broken into after he noticed his remote camera feed (much like Stephen Paddock’s) cut out while he was out and about. However, what the three officers and a detective found when they forced entry into room #521 was alarming, to say the least.

“Upon entry, we cleared the hotel room for possible suspects [but] did not locate anyone inside but we did observe what appeared to be a large duffel bag with several long guns sticking out of it,” Detective Patrick M. Connor stated in a police report (Ref: 18-12740-AR) filed later that day.

Sgt. Columbus who was present at the hotel phoned Bradley to ask if he would give his consent for police to search the room while Bradley was still on his way back from Route 495. According to the report, Bradley agreed to the search and continued to head that way.

When Det. Patrick Connor attempted to remove the firearms from what appeared to be a duffel bag a closer inspection revealed the bag was not a bag at all and rather a green flight suit. One of the three firearms had a detached stock and a silencer, and a third “appeared to be an AR-15 style riffle with a grenade launcher affixed to the bottom” of it. A number of fully-loaded magazines were found in a dresser drawer nearby.

“In the bedroom located on the right side of the hotel room we located a gun case with a larger capacity camouflage-colored rifle with a scope [and] three loaded high capacity feeding devices that matched the rifle.” Additionally, one of the rifles recovered was outfitted with a bump stock which is illegal in Massachusetts.

Once all of the firearms were secure the officers awaited Bradley’s arrival. When Bradley finally appeared on the hotel property in his white Jeep (TX Reg. 11JY6164) he exited the vehicle in the parking lot and gestured to the officers who were the on scene where the officers placed Bradley in handcuffs in order to further evaluate the situation. Soon after, Bradley was read his Miranda Rights and freely consented to speak with the officers on scene.

The detainee then provided Officer Connor with a Texas identification card upon his request (ID 03328980) along with a valid (confirmed through a local Fusion Center) Texas License to carry a handgun (TX03328980) with the expiration date of February 8, 2022. However, to the detainee’s regret, a Texas License to carry is not reciprocal in the State of Massachusetts which means that Bradley wad “deemed unlicensed,” according to the report.

“We confirmed with Francho that he wasn’t carrying these firearms under any special circumstances as well as he didn’t have any military I.D. or police cards,” Detective Patrick Connor stated in the report. “Francho stated that he brought the guns with him from Texas because he needed them with him for his mission.”

He also stated that we could take the guns and store them at Tewksbury Police Department, but he would have to come get them if he was called for his mission. Francho went on to say that he can’t tell us what he does, [where he] works, or why he has all the guns with him but [said] that he is down in the area working for a government agency that is dealing with a virus. I asked Francho what agency he works for but he stated that he couldn’t tell us and [said] that if we found out what he was doing we would have to be writing reports for a long time, due to the fact that it is classified. Francho came off very odd, it appeared that he was trying to hide something and was not forthcoming at all. Although, Francho was cooperative and provided answers to all of my questions he kept advising me that he couldn’t tell us why he was here or why he possessed all the firearms because it was classified. Francho kept telling me he worked for the LA Police Department but later told me it was only for five years. We contacted LAPD but they told us to call back Monday for confirmation. Sgt. Farnum and McLaughlin arrived on scene to assist.

Soon after Bradley confirmed he rented room #521 under his name March 11th through March 24th and gave officers consent to search the room which allowed Detective Connor to find three parking tickets from Cambridge Street at Anthem Street and Second Street.

“Two of the tickets were at the same exact location two days apart and the third was from an area a short distance away on a third day,” the detective stated. “I found this to be odd because according to Francho’s statements prior he had no ties to Boston or Cambridge but he kept receiving parking tickets.”

Bradley’s statements continued to fuel the detective’s suspicions that Bradley may have been out surveilling the area. Not to mention, Detective Connor observed several military-style tactical helmets, along with several tactical vests equipped with flash bangs, smoke grenades. Military style electronic equipment and satellite phones were also present as well as a 40mm grenade launcher.

The detainee eventually broke down and told Sgt. Farnum that he was a contractor for a company he owned, Ensyme Engineering. Although, he would not go into detail about what the company did.

“Based on the fact we located a grenade launcher, there were several tactical style vests filled with items we could not identify, we determined the situation to be dangerous, thus we stopped the search, evacuated the surrounding rooms, and called the State Police Bomb Squad […] to assist.”

Additionally, officers could see what appeared to be a laptop inside Bradley white Jeep that was mounted on a stand near the center console, similar to the one’s police use. The laptop was open and turned on and a hot spot was also visible.

About that time, Francho’s wife, Adrianne Jennings, was read her Maranda Rights from a preprinted card, the same as her husband was moments before.

Jennings told officers upon being questioned that the two always carry guns with them just encase her husband gets “deployed.”

The search of room #521 revealed Jennings was staying in the room with Francho, after it became apparent some of her possessions were inside. Moments later, officers discovered that Jennings did not have a license to carry firearms.

As Francho was being placed under arrest on various firearms-related charges police located and seized from his person two flash drives and a blue T-Mobile Galaxy S3 smartphone.

“Shortly after, Adrianne was advised she was under arrest and a walkie-talkie similar to the one observed on the counter of the hotel room was located in her purse incident to arrest,” the detective stated in his report. “Adrianne was transported back to TPD where she was booked by Lt. Casey.”

According to the report, FBI Senior Special Agent C. Brackett, and Special Agent S. McGawnn, along with Sgt. K. Ferrazzani of the Massachusetts State Police (Joint Terrorism Task Force) arrived at TPD to conduct an interview of Francho where he made comments to agents that appeared to be detached from reality but may have very well been true.

“[Francho] claimed to have had many prominent roles in the Obama campaign, in the German Government working as a plain-clothes drug officer in the DST-K44 Unit(Direction de la Surveillance du Territoire or Directorate of Territorial Surveillance in English), and [said that] he single-handedly saved a one star general who was kidnapped a few years ago.”

Within the investigation process, that day officers contacted Texas PD where Francho and Adrianne live to ask if there were any reports on the uncanny couple. As it turns out, Francho called the police on 19 March and advised them that Adrianne “went missing” and that she had “mental issues which she took medication for” but Adrianne told a rather different story.”

According to Detective Connor, “After an investigation, it was determined that Adrianne left the residence because she saw Francho’s shotgun lying on the table and she stated that her friend got killed by a shotgun and that she wasn’t going to let him kill her.”

The following items were recovered after a thorough search of the detainee’s room and vehicle:

Francho and Adrianna were both booked on 45 firearms charges and data from Francho’s Galaxy S3 smartphones was authorized for extraction.

Thanks to @Montograph on Twitter, and the extraordinary research he’s done regarding Bradley himself, we can now see that Ensyma Engineering Limited is a U.S. company based out of Coppell, Texas, 820 South Macarthur Boulevard # 105, to be exact which is the location of a UPS store that’s being used as a proxy location of business.

Nonetheless, Montograph also uncovered the fact that Francho Samuel Bradley also owned a company named Ensyma Engineering Limited that was incorporated in the United Kingdom on the first day of January back in 1970 and was appointed Director on 9 Oct. 1991, along with a man by the name of Robert Harvey but the company has since been dissolved.

Here is a record of the two doxxed directors:

Additionally, we see the private Twitter account @Ensyma202713 was formed on Oct. 5, 2017, at 2:47 p.m., just four days after the Las Vegas Route 91 Harvest Music Festival massacre in which 58 people reportedly lost their lives and over 500 others were injured in what has been dubbed the largest modern-day mass shooting in America.

To boot, several other private Twitter accounts appear to be related by name. One is the Boş Ver account (@ensyma202713) which coincidentally was formed on 1 October 2017, at 6:59 p.m., the exact same night as the Las Vegas shooting occurred just hours later.

A screenshot was taken from the Internet Archive that reveals what the main page of Ensyma.us looked like back in 2015. It boasts the words “United American Customer” over the ‘Enter’ key on a computer keyboard.

However, the web archive stops in the year 2015 and proceeds to go blank when one searches for current files.