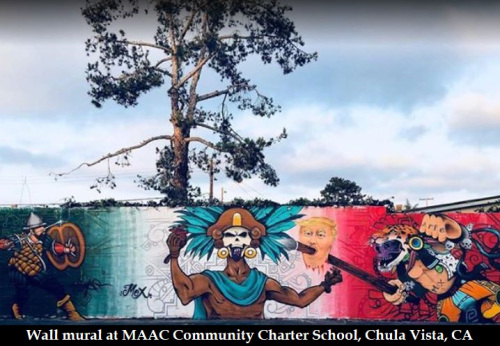 MAAC Community Charter School is a high school in Chula Vista, San Diego County, California, which touts itself as a “community school that offers students a unique curriculum in which students learn traditional subjects in relation to real-world issues.”

A mural outside the school depicts a demonic Aztec warrior thrusting a spear through President Trump’s severed head. Another devil warrior holds the President’s heart in his right hand.

The Aztecs, who flourished in central Mexico from 1300 to 1521, offered human sacrifices to their gods, in which the priest cut out the heart of the victim while still living. It is believed Aztecs also partook in cannibalism of the sacrificial victims. For the reconsecration of the Great Pyramid of Tenochtitlan in 1487, the Aztecs reported that they sacrificed 80,400 prisoners over the course of four days.

The Trump mural is the work of an “artist” named Sasha Andrade.

On her Facebook page, Andrade describes herself as “a United States Citizen born here in San Diego, and proud to be a Mexican-American. Yes my parents are 100% Mexican! I grew up in Both San Diego and Tijuana and proud of it! CHICANA HASTA LA MUERTE!”

Andrade also posted on Facebook this pic of a fat, bottle-dyed blonde, whom she identifies to be herself:

A public outcry about the mural led to MAAC Community Charter School covering up the mural and issuing this statement on the school’s website:

Sasha Andrade is 31 years old and lives in Imperial Beach, San Diego County, California. She is a self-employed baker/cake decorator.