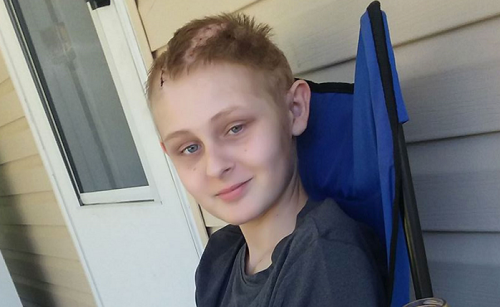 If you have doubts about donating your organs, you should heed this story.

Trenton McKinley, a 13-year-old boy in Mobile, Alabama, sustained brain injuries so severe that his parents agreed to donate his organs. But on the day when doctors would declare him dead in preparation for harvesting his organs, Trenton woke up.

LifeNews reports, May 7, 2018, that two months ago, Trenton suffered severe injuries when a small utility trailer that he was riding in flipped over. Doctors thought his brain injuries were so severe that he would never regain consciousness, so his parents agreed to remove his life support and donate his organs.

Trenton’s mom, Jennifer Reindl, said that her son showed no vital signs for a full 15 minutes. Eventually, she signed the papers to donate his organs, believing his life would help save other children’s: “A man from the UAB organ donation came and talked to us in the family conference room about donating five organs to UAB children’s hospital that would save five other children. We said yes, that also insured that they would continue to keep Trenton alive to clean his organs for the donation.”

Then, Trenton shocked everyone.

Reindl said, “The next day he was scheduled to have his final brain wave test to call his time of death but his vitals spiked so they canceled the test.” Trenton’s parents praised God for their son’s recovery. Reindl wrote on Facebook: “All glory to God…. I am so thankful for every second I get to spend my time with my son.”

Trenton is not only awake, but he also can walk, read and even do math problems again, although he still suffers from pain and seizures from seven skull fractures, and will need surgery again in the future. He is at home receiving therapy and beginning to heal.

The boy told local news reporters he had been in heaven for a little while after the accident, “I was in an open field walking straight,” and believes “There’s no other explanation but God” for his recovery.

About organ donations, here’s a warning from Paul A. Byrne, M.D., “Facts About Being An Organ Donor“:

You’ve probably heard and read a great deal of positive publicity about the benefits of the organ donor program – information which is provided by those in the medical profession deeply involved in the so-called “gift of life”. But when presenting their information they deliberately leave us believing the donor is already truly dead before the organs are taken. They intentionally omit the in-depth explanation of the necessary procedure a donor must undergo WHILE STILL ALIVE.

Prior to 1968 a person was declared dead only after their breathing and heart stopped for a determinate period of time. The current terminology “Brain Death” was unheard of.

When surgeons realized they had the capability of taking organs from one seemingly “close to death” person and implanting them into another person to keep the recipient alive longer, a “Pandora’s Box” was opened.

In the beginning, through trial and error, they discovered it was not possible to perform this “miraculous” surgery with organs taken from someone truly dead–even if the donor was without circulation for merely a few minutes – because organ damage occurs within a very brief time after circulation stops.

To justify their experimental procedures it was necessary for them to come up with a solution which is how the term “Brain Death” was contrived. To verify the determination of “brain death” they developed more than 30 different sets of criteria to declare “brain death” (DBD) published from 1968–1978. Every new set was less strict than previous sets–now there are many more. Dear reader, those criteria are flawed.

Recently we read and heard about the young man in Oklahoma declared “brain dead,” but his cousin, a nurse, recognized response during the 4 hours of preparation to take his organs. The transplant was not done. This young man is living proof that “brain death” is not true death. If his organs had been taken, he would have been killed.

He even attested to being able to hear and understand what was taking place but was unable to speak in his own defense as a result of his brain injury. Most frighteningly, he could not cry out “STOP!” when it came to the harvesting of his own organs. IMPORTANT: This is not an isolated case.

More recently, when there is a desire to get organs while the donor still has obvious brain activity, a Do-Not-Resuscitate (DNR) is obtained to stop the life support. When the donor is pulseless for as short as 75 seconds (but the heart is still beating) the organs are taken – this is called Donation by Cardiac Death (DCD). When a heart is taken for transplantation, after about 1 hour of operating, while the heart is beating and blood pressure and circulation are normal, the heart is stopped by the transplant surgeon. Then the surgeon lifts the heart from the donor’s chest.

Once DBD or DCD has been verified and permission extracted from distraught family members (in cases where relatives cannot be located the government often now makes the determination on our behalf) the “organ donor” undergoes hours, sometimes days, of torturous treatment utilized to protect and preserve the body-container of “spare parts!” The “organ donor” is forced to endure the excruciating painful and ongoing chemical treatment in preparation for organ excising. Literally the “donor” is now an organ warehouse and used for the sole purpose of organ preservation until a compatible recipient can be located.

Organ removal is performed while the patient is given only a paralyzing agent but no anesthetic! Multi-organ excision, on the average, takes three to four hours of operating during which time the heart is beating, the blood pressure is normal and respiration is occurring albeit the patient is on a ventilator. Each organ is cut out until finally the beating heart is stopped, a moment before removal.

It is well documented the heart rate and blood pressure go up when the incision is made. This is the very response the anesthesiologist often observes in everyday surgery when the anesthetic is insufficient. But, as stated above, organ donors are not anesthetized.

There are growing numbers of protesters among nurses and anesthesiologists, who react strongly to the movements of the supposed “corpse.” These movements are sometimes so violent it makes it impossible to continue the taking of organs. Resulting from their personal experiences and attestations, many in the medical profession have removed themselves from this program altogether and/or are having second thoughts about the donor being factually or truly dead.

The federal government has been deeply involved in promoting vital organ transplantation. A federal mandate issued in 1998 states that physicians, nurses, chaplains, and other health care workers may not speak to a family of a potential organ donor without first obtaining approval from the regional organ retrieval system. Only a “designated requester” trained to approach family members is allowed to discuss the matter with them. Why? Because studies show that these “specialists” have greater success in obtaining permission. They are trained to “sell” the concept of organ donation, using emotionally-laden phrases such as “giving the gift of life,” “your loved one’s heart will live on in someone else,” and other similar platitudes – all empty of true meaning. Don’t forget that the donation and transplant industry is a multibillion dollar enterprise…. One thing, however, is clear: donor families do not receive any monetary benefit from their “gift of life.”

In the midst of trauma and shock the anguishing family/loved ones of the patient are subjected to immense pressures by those seeking to obtain approval for taking the organs. Incapable of making a decision based on factual and sound information, “consent” is obtained through coercive measures. “No hope” for recovery is the first step in this process followed by the false declaration of death—“brain death.” Relatives are not only persuaded to “consent” and participate in organ donation, but also they are made to feel obligated. Fully “informed consent” is not part of the organ donation process….

More often there is a rush to pronouncement of “brain death” when a young person has been suddenly critically injured. Parents and young persons must be fully informed and armed with the truth before such a decision is forced upon them at the time of greatest distress.

The need for a ventilator doesn’t mean the brain is permanently incapacitated or one’s health cannot be restored! This “life support” device is a supplement to the patient’s compromised, weakened physical condition and may be necessary in providing the patient with oxygen while removing carbon dioxide during the most crucial period. Time and continued medical care are necessary for the ongoing treatment to protect and preserve the patient’s life. The ventilator provides the patient and physician this valuable time as it eases the patient’s distressed respiratory system allowing time for therapy and healing.

Knowing full well how critical the ventilator is, to withdraw it when it is needed most is absurd! Yet, it is planned for the patient to be taken off for up to 10 minutes – the patient can only get worse! This test is sometimes lethal. Make sure to instruct all medical staff: “DO NOT DO AN APNEA TEST!”

Great strides have been made in the use of artificial organs. Recent articles are publicizing the newest, vastly improved artificial hearts soon to be available for those with a failing heart who are on a transplant waiting list.

Here is exciting and hopeful news for those with brain injuries. Successful results of hypothermic therapy have been published from studies done in Japan and Germany with a 60-70% success rate. Also, new research has demonstrated the benefit of the steroid, progesterone, in patients with head injury….

Saving a life is certainly a good thing but using others as sacrificial lambs is throwing the door wide open to compounding venues. Currently, there are those who are working on developing new human beings for the sole purpose of organ transplantation. Conversely, the good news is, other researchers have discovered methods to grow just the organs which can be accomplished using the affected persons own genes.