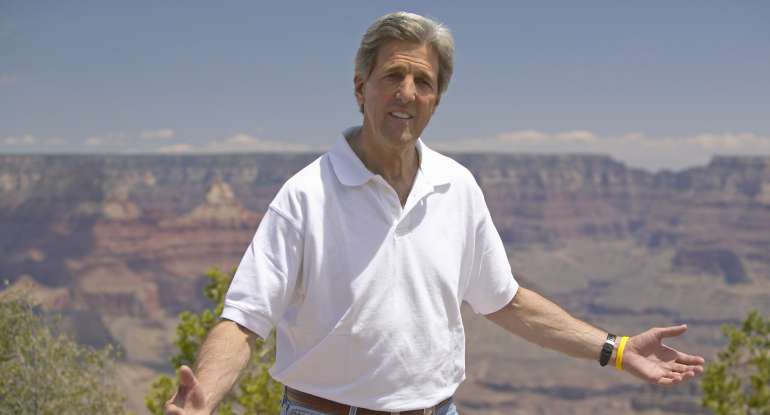 Like Hillary Clinton, former Secretary of State John Kerry apparently enjoys the immunity from prosecution that being a powerful Leftist brings you today.

This was not, apparently, a one-off meeting between Kerry and the foreign minister of the regime that orders its citizens to chant “Death to America” in mosques every Friday: “It was the second time in about two months that the two had met to strategize over salvaging a deal they spent years negotiating during the Obama administration, according to a person briefed on the meetings.”

Further, the Globe reported that Kerry has not limited his shadow diplomacy to Zarif: “[Kerry] also met last month with German President Frank-Walter Steinmeier, and he’s been on the phone with top European Union official Federica Mogherini … Kerry has also met with French President Emmanuel Macron in both Paris and New York, conversing over the details of sanctions and regional nuclear threats in both French and English.”

Today, Kerry’s spokesperson confirmed the meetings — but danced around admitting his behavior:

Why? Because John Kerry must know he has put himself in violation of a never-prosecuted federal law that only seems to be mentioned when a conservative is involved — for example, see what former Acting Attorney General Sally Yates said about Michael Flynn.

Isn’t that exactly what Kerry is doing? Shouldn’t he be arrested and prosecuted?

Kerry’s friends who are still employed in the U.S. government won’t be roused to care about the Logan Act unless one of their own is back in the White House, and, say, former Secretary of State Mike Pompeo goes around the world drumming up support for the Trumpian foreign policy that the neo-Obama in the Oval Office is busy dismantling.

Pompeo is unlikely to do that, of course, because he, unlike Kerry and others on the Left, actually respects the law. But were he or some other member of the Trump administration to do what Kerry is doing now, the media outcry would be immediate and insistent, calling for the immediate arrest and prosecution of the perpetrator — and that arrest would likely soon follow.

The law in the United States is for the little people, and for conservatives.

Popular culture is obsessed these days with a “white privilege” that extends even to the shampoo bottles in hotels (who knew?). But the most heinous example of privilege in today’s society is one that no one talks about: Leftist privilege.

If you’re a Leftist and want to start a not-for-profit organization, no problem. Only conservative organizations got buried in mountains of red tape and hobbled by unexplained delays by the IRS.

If you’re a Leftist and start a news website, you’ll have loads of readers referred to your site from Facebook, Twitter and the rest. Only conservative sites are being systematically blocked.

If you’re a Leftist president, you can oversee a corrupt and lawless administration for eight years and then brag about how your presidency was “scandal-free.” You won’t hear a murmur of dissent from an establishment media that worked hard throughout those years to make sure that as few people as possible knew about your scandals.

And if you’re John Kerry, you can traverse the globe doing everything you can to undermine the foreign policy of the United States government, secure in the confidence that you will not face any consequences at all. You’re John Kerry. You’re a made man in the Leftist political elite. You could shoot someone in the middle of Fifth Avenue, and awaken the next morning to adoring headlines in the New York Times and the Washington Post.