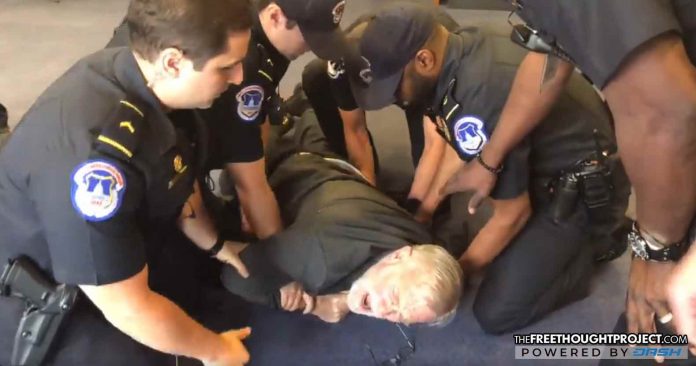 Washington, D.C. — Retired CIA analyst and outspoken antiwar activist, Ray McGovern, who chaired the National Intelligence Estimates and prepared the President’s Daily Brief, was forcibly removed from the United States Senate Intelligence Committee hearing Wednesday as Gina Haspel, the nominee for director of the CIA, was answering questions about her record of torture.

McGovern is a highly decorated CIA analyst who received the Intelligence Commendation Medal at his retirement. He has since become an outspoken antiwar and anti-police state activist and returned the medal in 2006 in protest to the CIA’s involvement in torture.

McGovern is also a veteran of the Vietnam war which adds to his already high level of credibility in speaking out against the system.

During the hearing, McGovern demanded that Haspel answer the questions asked of her about the torture of terrorism suspects at a CIA black site in Thailand. In response to the interruption, the capitol police were called in to drag McGovern out.

As the video shows, within only seconds, he was swarmed by police who shoved him out the door and into the lobby. He was then thrown to the ground as he pleaded with officers not to hurt his dislocated shoulder.

As the struggle to subdue the elderly McGovern continued, police repeatedly yelled, “Stop Resisting,” to which he replied, “I am not.”

Before McGovern was forcibly removed by police, Haspel was interrupted by another protester. This time, it was a lone woman, wearing a red t-shirt and shouting “Bloody Gina!” and “you are a torturer!” She was also removed by police.

According to CIA whistleblower John Kiriakou, “Bloody Gina” was a name given to her by her own colleagues in the CIA. According to Kiriakou, Haspel even took part in the torture—because she enjoyed it.

As TFTP reported on Wednesday, Haspel, 62, joined the CIA in 1985 and was named Deputy Group Chief of the agency’s Counterterrorism Center in 2001. She was then assigned to oversee a secret CIA “black site” prison in Thailand in 2002. The prison, code-named “Cat’s Eye,” was one of the locations where alleged Al-Qaeda members were detained and tortured.

In addition to overseeing the torture, Reuters reported that Haspel “carried out an order to destroy videotapes of the waterboarding” and other torture methods, after she was instructed to do so by the Bush Administration.

While Haspel was not mentioned by name, an anonymous female CIA official with her credentials was mentioned in a 2013 report from the Washington Post, which claimed that she was not chosen to lead the agency’s clandestine service, because of her direct involvement in its Bush-era torture programs:

“The officer, who is undercover, served as director of the National Clandestine Service on an interim basis over the past two months, and many considered her a front-runner to keep the post, which involves overseeing the CIA’s spying operations worldwide.

But she faced opposition because of her extensive role in an interrogation program that critics have said relied on torture to get information from al-Qaeda captives after the Sept. 11, 2001, attacks. She had run a secret prison in Thailand where two detainees were subjected to waterboarding and other harsh techniques. She later helped order the destruction of videotapes of those interrogation sessions.”

When retired CIA analysts are being dragged by police out of a Senate hearing for exposing the horrendous crimes of the person being appointed to head the CIA, it speaks to the level of tyranny which has taken hold in America. If you haven’t been, now may be a good time to start paying attention.