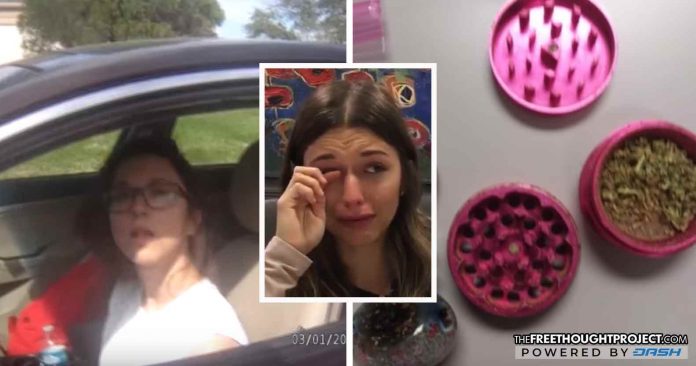 Katy, Texas – A traumatized mother is speaking out after she said she was brutally raped by a jail guard after she was arrested and thrown in jail when she admitted to a police officer that she had less than half a gram of marijuana in her car for medicinal use.

Emma Lopez, a 26-year-old mother of two, was pulled over for speeding a few blocks from her home by a Katy Independent School District police officer on March 1. While she was polite and complied with the officer, he asked her to step out of her car and then said, “The minute I stopped you, I could smell marijuana on your car.”

Lopez admitted that she did have less than half a gram of cannabis in her car, and she told the officer that she used it to control her seizures. As The Free Thought Project has reported, thousands of people who suffer from seizures have discovered the incredible power of cannabis as a treatment, and research has found that 90 percent of epileptic patients who tried medical cannabis reported a reduction in seizures.

“I have seizures and I don’t even smoke very much,” Lopez said.

Unfortunately, Texas is among the remaining states that have yet to legalize cannabis, and it is still operating under the federal government’s lie that cannabis has no medicinal value. The officer at the scene escalated the situation by calling in a drug dog to find the minuscule amount of cannabis.

“Unfortunately, you’re going to jail today,” the officer told Lopez after the remains of the plant were recovered from the car.

But the arrest and the charges that would result from it were only the beginning of the nightmare Lopez said she was forced to endure. She told KTRK News that she was taken to Harris County Jail where she was placed in a holding cell by herself. A few hours later, a male guard entered, secured her arms in handcuffs so that she couldn’t defend herself, and then he raped her.

“After he asked me to get up and put me up against the wall and handcuffed me, he pulled my pants down and pulled his pants down and I froze,” Lopez said. “I asked him not to do it. He said, ‘If I say anything, he would do it again, and I wouldn’t be able to say anything.’”

To make matters worse, Lopez claimed that she tried to alert female jail guards to the assault after it happened, but they just told her to stay quiet and sit down until she was processed.

After she was finally released from jail the next day, Lopez said she went directly to the hospital where a rape kit was collected. Lopez’s attorney, Michael Edwards, told KTRK that he believes there is a mountain of evidence that proves Lopez was sexually assaulted by the jail guard.

“There’s surveillance, there’s jail calls, there’s a number of elements that support Mrs. Lopez in her outcry in what happened to her,” Edwards said.

The Harris County Jail released a statement confirming that it is currently investigating the incident:

“The Harris County Sheriff’s Office is investigating an allegation that a female jail inmate was sexually assaulted by an employee inside the Harris County Jail in early March. Investigators have interviewed the victim, reviewed video recordings from inside the jail, and are taking all other necessary steps to ensure a thorough investigation is conducted. The investigation is ongoing, and no charges have been filed at this time. The Harris County Sheriff’s Office takes these allegations seriously, and we are committed to ensuring the safety and well-being of all inmates entrusted in our care.”

In a study from the United States Department of Justice published in 2013, the Harris County Jail was listed as having one of the worst rates of sexual assault in the country.

Harris County also made headlines when dash camera footage was released that showed two sheriff’s deputies stripping a 21-year-old college student naked in public, forcing her to lie down on the side of the road, and then raping her for 10 minutes, after they pulled her over for allegedly running a stop sign and then claimed they needed to conduct a “vaginal cavity search” because they “smelled marijuana.”

Emma Lopez has now filed a lawsuit against the City of Katy, the Harris County Sheriff’s Office and Sheriff Ed Gonzales, the officer who arrested her and the unnamed jail guard who raped her. She claimed that her Fourth and Fourteenth Amendment rights were violated from the moment she was falsely arrested to the moment she was sexually assaulted, and she has been forced to endure mental, emotional and psychical anguish as a result.