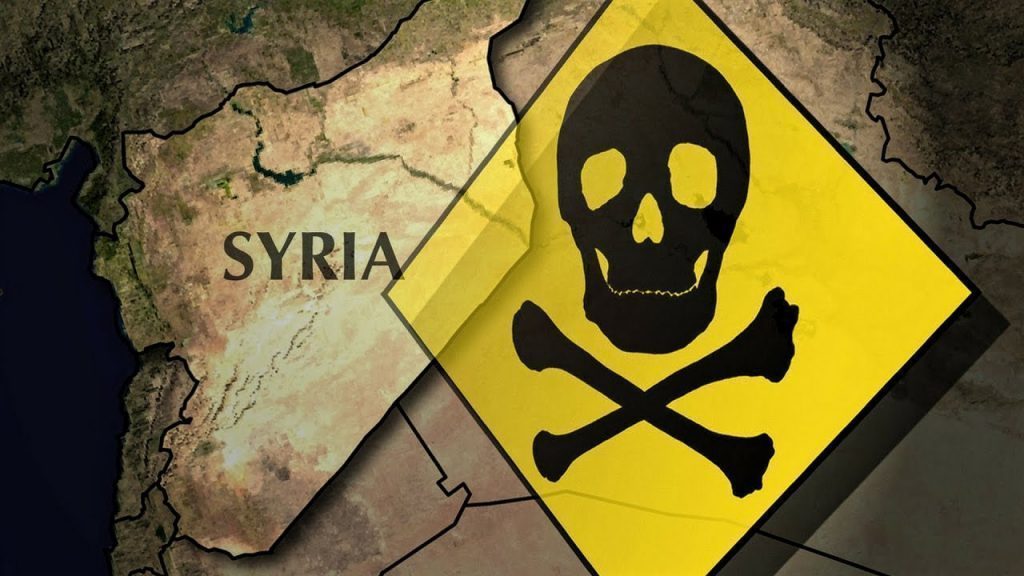 As Israel sets the stage for a possible attack on Iranian forces inside Syria under the false pretext of “pre-emptive” self-defense against Iranian missiles, it appears that the United States and France are attempting to set a stage of their own. This stage, however, will be the same tired scene replayed repeatedly throughout the Syrian crisis – i.e. the alleged deployment of chemical weapons that will be blamed on the Syrian government in order to justify more airstrikes and missiles against the Syrian government and in defense of terrorist elements backed by the United States, Britain, and France.

Signs are now pointing toward the possibility that there is yet another chemical weapons propaganda ploy being set up in Syria in much the same way as the recent and now-debunked Douma chemical attacks were created and propagated throughout Western media.

“US security services are planning provocations with the use of prohibited substances in Syria. The operation is led by a former militant of the Islamic State *[Daesh], Mishan Idris Hamash. The aim is to stage a chemical attack against civilians to be further spread in the media,” the source told Sputnik.

According to the source, the preparations began on April 23. The civilians are being shipped to a territory near Jafra oil field to participate in a staged filming of an attack scene.

Although based on one source, it should be noted that France is now making statements similar to those it made in the run-up to the staged Douma chemical weapons attack where it announced that if Bashar al-Assad used chemical weapons, France would take action.

“The goal of the strike against Syria was to prevent Bashar Assad from repeating such attack. If this happens, we can consider the possibility of repeated strikes,” French Defense Minister Florence Parley said.

As Syrian journalist and analyst “Arabi Souri” stated, “It’s the open invitation for terrorists to get ready to carry out a new chemical attack. Waiting for proper timing it in retaliation for the losses of some of their assets.”

Numerous chemical weapons incidents have been blamed on the Syrian government by the United States over the course of the last seven years, none of which have been proven, most of which having been conducted by the Western-backed terrorists themselves. Others, such as the recent incident in Douma, have not even been proven to have taken place.