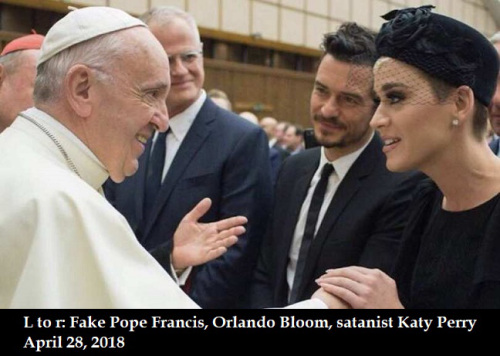 In an interview with a woman wearing a pair of upside-down cross earrings, Perry said she had sold her soul to the Devil. She said:

“I released a record when I was 16, because I grew up in a household where all I ever did was sing gospel music and my parents were both traveling ministers, I kind of sing about what was going on in my life at 15. That’s how I got introduced to the music industry. I swear I wanted to be like the Amy Grant* of music. It didn’t work out, so I sold my soul to the Devil.”

*Amy Grant is called the Queen of Christian Pop.

If you think that interview was a fluke or that Perry was joking, here she is some years later, saying the same thing:

“When I was 15, because I grew up in a household where all I ever did was listen to gospel music and my parents were both traveling ministers, so I kind of sang about what was going on in my life at 15 and that’s how I got introduced to the music industry. I swear I wanted to be like the Amy Grant of music. Yeah. But it didn’t work out, and so I sold my soul to the devil.”

Katy Perry is also a vocal LGBT advocate and a promoter of cannibalism.

But fake pope Francis saw fit to invite this admitted satanist to the Vatican to speak on Transcendental Meditation (TM) at a New Age-y conference on April 26-28, “Unite to Cure — How Science, Technology and the 21st Century Will Impact Culture and Society”.

On day three of the Vatican conference, Perry joined a discussion on “Impacting Children’s Health Through (Transcendental) Meditation Globally” with her mentor, Bob Roth — CEO of the David Lynch Foundation and a TM mentor to Oprah Winfrey and Dr. Oz.

Roth’s organization distributed a gift pack to participants at the beginning of the conference, which contained a one-eye “meditating” charm bangle and a book promoting TM.

A Vatican official said: “They did manage to distribute these gifts through (at least) one hotel where some conference participants were staying. Many other guests distributed their own materials to fellow attendees, as is the nature of these events.”

A source close to the Vatican told LifeSiteNews:

“For Katy Perry to speak about Transcendental Meditation from the same seat used by the Pope during major Church meetings is symbolic of the chaos, disorientation and scandal that marks this pontificate. It would be one thing to have her presence moderated by a Church leader, but to have the podium given over to celebrity TM proponents with no Church voice to counter them is unconscionable.”

Perry and her boyfriend, paddling-a-canoe-while-nude actor Orlando Bloom, were later treated to a royal tour of the Vatican by Archbishop Paul Tighe, secretary of the Pontifical Council for Culture, and an audience with fake-Pope Francis.

The Catholic Church has long regarded Transcendental Meditation to be an occult practice: