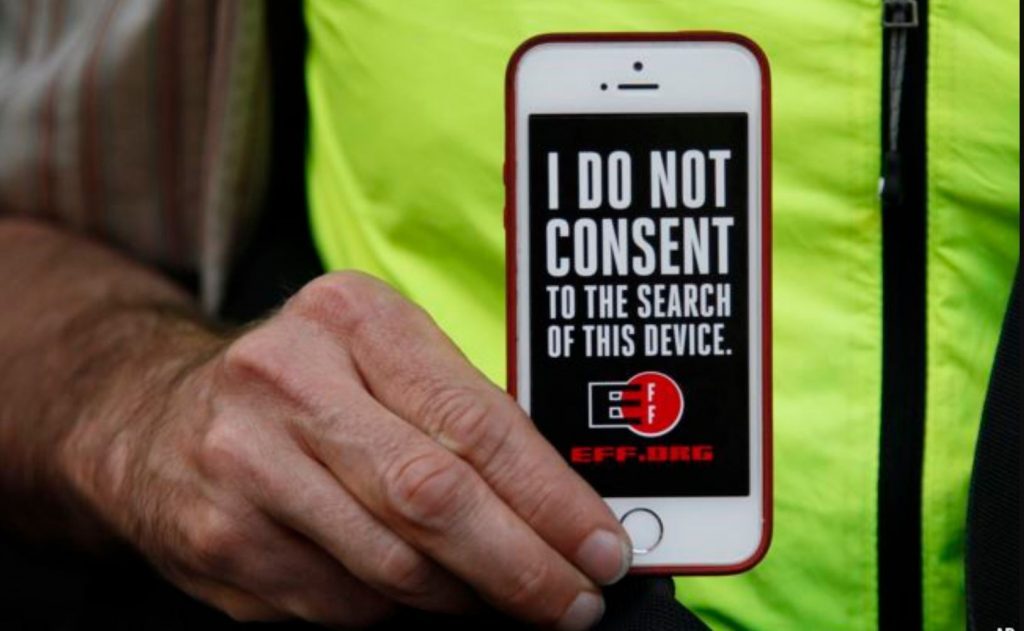 Another federal court has ruled that U.S. border agents cannot search the cell phones and electronic devices of travelers without individualized suspicion.

On Wednesday a federal appeals court sided with the Fourth Amendment by ruling that U.S. border officials must have individualized suspicion of wrongdoing before attempting to search the cell phones and electronic devices of travelers. The decision is the latest in a series of court rulings which recognize that the rules which govern invasive searches of digital devices and data must be updated.

The case, United States v. Kolsuz, involves border patrol agents stopping a traveler as he prepared to board an international flight at Dulles Airport. The agents found parts of a firearm in his checked luggage and believed he did not have the proper licenses to export the parts. The agents seized his phone and searched it at the airport before sending it to another facility where a more thorough “forensic” search of all the data was conducted. The more invasive search gave the agents access to the man’s personal contact lists, emails, messenger conversations, photographs, videos, calendar, web browsing history, call logs, and GPS coordinates of everywhere he has traveled. All of this was done without a court-approved search warrant.

The American Civil Liberties Union defended the man in court, challenging the forensic search as a violation of his Fourth Amendment rights. The ACLU filed a “friend-of-the-court” brief and made oral arguments outlining how the amount of private data stored on smart phones and similar devices should require the government to get a search warrant from a judge. “At the very least, border agents must demonstrate good reason to believe the traveler was violating the law before conducting the search,” the ACLU writes. “We urged the court to reject the government’s argument that cell phones should be treated the same as regular luggage, which border authorities are routinely allowed to search without a warrant or any individualized suspicion.”

In their ruling the court agreed with the ACLU, stating that “a forensic border search of a phone must be treated as non-routine, permissible only on a showing of individualized suspicion.” The court elaborated on this statement in their opinion:

While an international traveler can mitigate the intrusion occasioned by a routine luggage search by leaving behind her diaries, photographs, and other especially personal effects, the same is not true, at least practically speaking, when it comes to smartphones and digital devices. Portable electronic devices are ubiquitous – for many, the most reliable means of contact when abroad – and it is neither “realistic nor reasonable to expect the average traveler to leave his digital devices at home when traveling.”

The ACLU and the Electronic Frontier Foundation are currently engaged in a lawsuit against the federal government on behalf of 11 people who had their phones and laptops stolen and searched by federal agents when coming home to the United States. The lawsuit is attempting to force the courts to require a warrant based on probable cause before searching travelers and violating their Fourth Amendment rights. The ACLU writes that a decision in that case should come in the coming months. In addition, the Electronic Privacy Information Center has filed a Freedom of Information Act lawsuit against the U.S. Immigration and Customs Enforcement regarding the agency’s use of forensic technology designed to hack cellphones. EPIC is attempting to clarify how ICE uses the devices to conduct warrantless electronic searches of cellphones and laptops along the U.S. border.

Documents previously released to the ACLU under Freedom of Information Act requests revealed that Border Patrol agents searched over 6,500 people from October 2008 to June 2010. This data from the Department of Homeland Security also shows that an astonishing 5,000 people were searched along the border in February 2017. In response to these searches, four members of Congress introduced legislation that would require border agents to get a warrant before performing a search of someone’s cell phone, laptop, or tablet. The bill was simultaneously introduced by Senator Ron Wyden and Representatives Jared Polis and Blake Farenthold. If the measure becomes law, it will require border agents to have probable cause and a warrant before accessing the contents of a device belonging to a U.S. citizen or permanent resident. The bill also makes it clear that agents cannot hold individuals for more than four hours in an attempt to force them to unlock their devices.