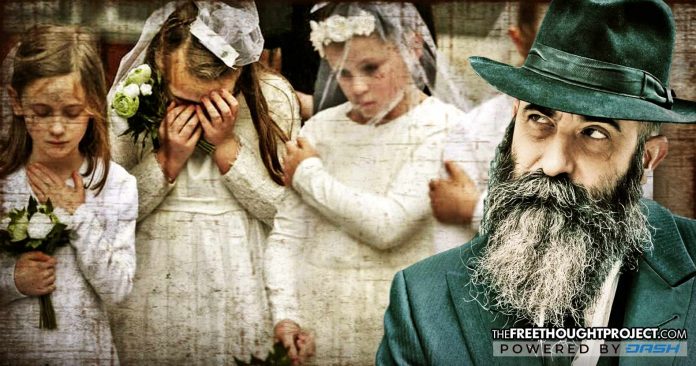 When Americans think of pedophiles, they may think of an adult stalking and assaulting a child in an isolated case. But a form of pedophilia of that is often ignored—even though it affects hundreds of thousands of children—was considered “legal” in every state in the United States up until this week.

Delaware became the first state in the country to officially ban child marriage by signing House Bill 337into law, which prohibits marriage of individuals under 18 years of age. The law closes loopholes allowing children to enter into legal marriages with parental consent, or because they are pregnant. It also gives the court authority to annul marriages where one of the individuals involved was under the age of 18 at the time.

As The Free Thought Project has reported, child marriage is an ongoing problem across the county and “alarmingly, the number of children married away to fully mature adults could be much higher than the already-startling number—10 states provide only fragmentary statistics or none at all.”

An investigation from Frontline revealed disturbing statistics, which showed that between 2000 and 2015, at least 207,459 minors were married in the United States. While a percentage of those cases were 16- and 17-year-olds, an alarming number of states allowed children as young as 10 and 12 years old to marry, and in nearly 90 percent of the cases, young girls married adult men.

The investigation found that the youngest children to marry were three 10-year-old girls in Tennessee in 2001, who were married to men ages 24, 25 and 31. A 74-year-old man in Alabama holds the record as being one of the oldest to marry a child, and his bride was just 14 years old.

The trend also impacts young boys, and the youngest boy to become a child groom was 11 years old when he married a 27-year-old woman in Tennessee in 2006. The report also noted:

Most states set the age of sexual consent between 16 and 18. A person can be charged with sexual abuse or statutory rape for having sex with a minor. Yet, we found numerous examples of children who were given marriage licenses before they could legally consent to sex. These marriages were almost always approved by court clerks and judges.”

Human Rights Watch reported that across the world, “15 million girls under 18 marry each year—one every two seconds,” and while there are some countries where child marriage is an expected phenomenon, the United States is not one of them, making it shocking that countries such as “Honduras and Malawi have tougher child marriage laws than many US states.”

Delaware State Rep. Kim Williams, the primary sponsor of the state’s bill to ban child marriage, released a statement saying that she believes the legislation will protect children from “forced marriage and its dangerous consequences.”

“Children under 18 have no legal standing—they cannot file for divorce, utilize a domestic violence shelter, apply for a loan or open a credit card. They cannot enter any legal contract, but until this bill was signed they could be married as a child without any way of escaping an abusive marriage,” Williams said, adding, “I am so proud that Delaware is leading the way to protect children, and I hope that other states follow suit.”

State Sen. Anthony Delcollo said he supports the bill because it falls in line with the way the state treats minors in every other aspect of life and because it eliminates “an exception for circumstances that would otherwise be considered statutory rape,” which he referred to as an “unacceptable exception.”

“For every other purpose, we view individuals under the age of 18 as having insufficient legal capacity to make decisions, enter into contracts, hire attorneys, and do all similar acts,” Delcollo said. “It flies in the face of reason to think that the incredibly important decision to marry should be any different.”

As Delaware makes the move to ban child marriage, many survivors of forced marriages—who have endured years of abuse at the hands of their older spouses—hope the rest of the country will follow suit.