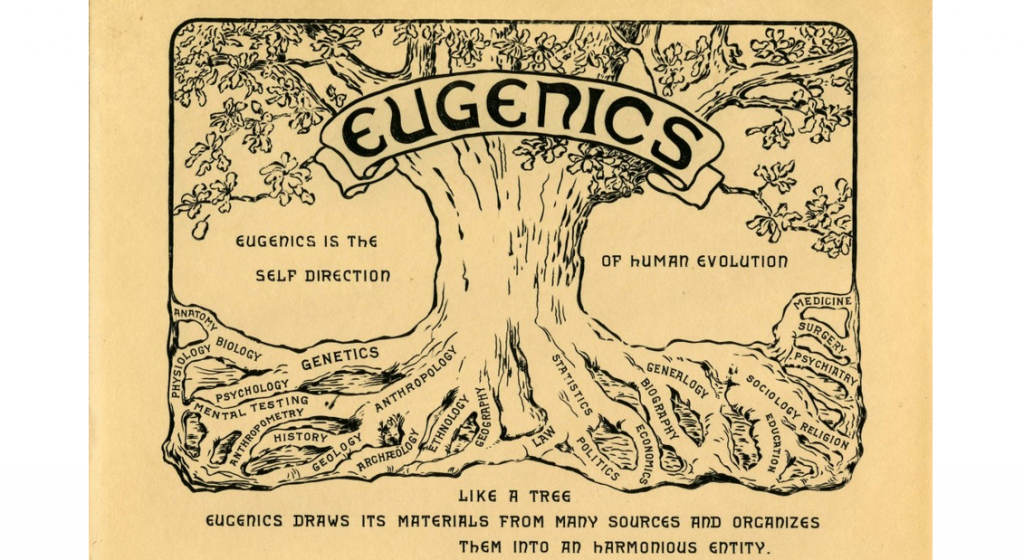 What is eugenics, you may be wondering.  There are confused interpretations of that term, especially when it is not recognized for what it originally had been intended to mean, i.e.,

[T]he science of improving a human population by controlled breeding to increase the occurrence of desirable heritable characteristics. Developed largely by Francis Galton as a method of improving the human race, it fell into disfavor only after the perversion of its doctrines by the Nazis. [1]

Frankly, I really do not accept that meaning which, somehow, seems to be sanitized and even ‘glamorized’, in my opinion.  Why do I say that?  The reasons are many, especially since eugenics usually has meant the culling of humans and their lives either by clandestine or open-ended means of population reduction, some of which include legal abortion and legal assisted suicide called “euthanasia.”

Euthanasia is illegal in most of the United States. Physician aid in dying (PAD), or assisted suicide, is legal in the states of Washington DC, Pennsylvania, California, Colorado, Oregon, Vermont, Hawaii, and Washington; its status is disputed in Montana. The key difference between euthanasia and assisted suicide is who administers the lethal dose of medication: Euthanasia entails the physician or another third party administering the medication, whereas in assisted suicide it is the patient’s prerogative to self-administer the medication in order to end their life. [2]

Regardless of any religious value, input and/or protestations, the deliberate ending of a life is a seriously flawed concept, in my opinion.  Notwithstanding what one’s belief system may be, there are key ethical, moral and legal aspects impacted usually based upon the assumed prerogative(s) of those who think others should be eliminated for various reasons.  That genre of thinking is not new; it’s come down through numerous millennia!  One significant indicator of life’s importance is that Moses, the biblical Hebrew patriarch, handed a set of rules to the Israelites to follow, one of which was “Thou shalt not kill” [Exodus 19:23].  That was a moral code, which has become interpreted as a religious philosophy.

When state actors, government agencies, technological advances, and/or dictators take it upon themselves to plan and program the snuffing out of life for whatever reason(s), e.g., improving the human gene pool; creating a master race; or ridding the planet of too many “useless eaters”—as is the current thinking of the apparent New World Order as “written in stone” on the Georgia Guidestones, society has to question if the human race has lost our humanity, empathy and real purpose of the meaning of life to do away with over 95% of the current human population.  Or, is that too altruistic of a mores to carry forward into the newly-projected world of transhumanism; becoming a human android; or vacillating between any of 31 genders?

If the above progressive agenda be the case, then eugenics would appear hostile to those ‘trends’ in human progression.  So, why has the “culling of humans” been such a dominant hate trait at various times in human history?  There are indications of eugenics being practiced in the supposed advanced culture of Atlantis over 25 thousand years ago.

Eugenics really had its “heyday” starting in the early 1880s when Charles Darwin’s cousin, Sir Francis Galton, coined the term “eugenics.”  Galton’s theory in eugenics was that only the “best” humans should be able to procreate.  By the end of World War I (1918), the goal of eugenics was to prevent inferior stock from reproducing.  The role that children ultimately would have in eugenics research is documented in the exceptional book Against Their Will, The Secret History of Medical Experimentation On Children In Cold War America.

Chapter Five “Vaccines” tells the horrifying stories of experiments children in orphanages suffered at the hands of those inventing vaccines, especially at the Hamburg, Pennsylvania, facility for the retarded.

According to Against Their Will authors,

The Ypsilanti State Hospital in Michigan was home to a wide assortment of mentally and retarded patients.  Salk, along with several other researchers, took over a ninety-six-man ward, injected half the men with an experimental vaccine, and then “exposed [them] to infection by inhalation of a strain of Type B influenza virus.” It would certainly not be the last time [Dr. Jonas] Salk utilized such institutions.  [Pg. 87]

The Rockefeller Institute and prestigious universities were involved in eugenics research!

According to Edwin Black, author of IBM and the Holocaust and War Against the Weak: Eugenics and America’s Campaign to Create a Master Race,

Eugenics would have been so much bizarre parlor talk had it not been for extensive financing by corporate philanthropies, specifically the Carnegie Institution, the Rockefeller Foundation and the Harriman railroad fortune. They were all in league with some of America’s most respected scientists hailing from such prestigious universities as Stamford, Yale, Harvard, and Princeton.These academicians espoused race theory and race science, and then faked and twisted data to serve eugenics’ racist aims. [3] [CJF emphasis]

Much of the sordid research in eugenics was financially supported by the ‘upper crust of society’, the moneyed-men of technological advances, as in

The Harriman railroad fortune paid local charities, such as the New York Bureau of Industries and Immigration, to seek out Jewish, Italian and other immigrants in New York and other crowded cities and subject them to deportation, trumped up confinement or forced sterilization.

The Rockefeller Foundation helped found the German eugenics program and even funded the program that Josef Mengele worked in before he went to Auschwitz.  [….]

Even the United States Supreme Court endorsed aspects of eugenics. In its infamous 1927 decision, Supreme Court Justice Oliver Wendell Holmes wrote, “It is better for all the world, if instead of waiting to execute degenerate offspring for crime, or to let them starve for their imbecility, society can prevent those who are manifestly unfit from continuing their kind…. Three generations of imbeciles are enough.” This decision opened the floodgates for thousands to be coercively sterilized or otherwise persecuted as subhuman. Years later, the Nazis at the Nuremberg trials quoted Holmes’s words in their own defense. [4] [CJF emphasis]

[That SCOTUS decision is known as Buck v. Bell, 274 U.S. 200 (1927), which sort of ‘affirmed’ the Jacobson 1905 decision, while still impacting  the current politics, policies  and mandates regarding vaccines/vaccinations today in the USA!]

Human genetics became an enlightened endeavor in the late twentieth century. Hard-working, devoted scientists finally cracked the human code through the Human Genome Project. Now, every individual can be biologically identified and classified by trait and ancestry. Yet even now, some leading voices in the genetic world are calling for a cleansing of the unwanted among us, and even a master human species. [5]

In America, eugenicists scored their greatest successes between the mid-1920s and 1940. The 1927 United States Supreme Court decision in Buck vs. Bell declared sterilization of “imbeciles” constitutional. As a result, some 60,000 women were forcibly sterilized between 1927 and 1965. In addition, Black shows that eugenicists had a substantial role in shaping the Immigration Act of 1924, which drastically restricted immigration from eastern and southern Europe while keeping immigration from “Nordic” countries such as Germany and Great Britain relatively open. [6]

Eugenics also permeated the extensive writings of birth-control pioneer Margaret Sanger, the founder of Planned Parenthood. Sanger, a fellow-traveler in the eugenics movement, repeatedly advised donors not to help the poor. In Pivot of Civilization (1922), Sanger declared that “organized charity itself is the symptom of a malignant social disease.” The growth of charity, Sanger declared, was “the surest sign that our civilization has bred, is breeding and is perpetuating constantly increasing numbers of defectives, delinquents, and dependents.” Sanger continued her eugenically inspired war against the poor until the 1950s. [6]

That brings us to this: How the Rockefeller Foundation Quietly Funded the Anti-Fertility Vaccine [7].

Eugenics today is ‘cloaked’, in my opinion, in various technologies consumers really can’t wrap their minds around, I think, because they are ‘dressed up’ as advances in technology.

If the Georgia Guidestones are considered the “new ten commandments” for the New World Order, we have to wonder how close to 6.8 billion people will be “offed” from the planet.

Can there be clandestine eugenics going on no one would consider, except when one digs into the dirty underside of the sciences and technology involved, one has to wonder what role they play in what’s called “soft kill.”

One of the current eugenicists, in my opinion, probably is Bill Gates with his apparent obsession with funding vaccines which, according to his TED talk, will be used to reduce the population.  Consider what Gates says here.

“The world today [2010] has 6.8 billion people … that’s headed up to about 9 billion. Now if we do a really great job on new vaccines, health care, reproductive health services, we could lower that by perhaps 10 or 15 percent.” Bill Gates TED Talk

Furthermore, we have to consider that Bill Gates probably was exposed to the idea of eugenics growing up since his father, Bill Gates Sr., served on the national board for Planned Parenthood.  Hear Bill Gates’ say “My dad was head of Planned Parenthood; it was very controversial to be involved with that.”

Margaret Sanger, the founder of Planned Parenthood, was a known eugenicist and racist! [11]

Other aspects of the “soft kill” approach to eugenics and “offing” the Planet’s human populations in order to get to one-half-a-billion people probably include:

Eugenics definitely seems to be alive, well and even thriving in today’s Kabuki-like world.