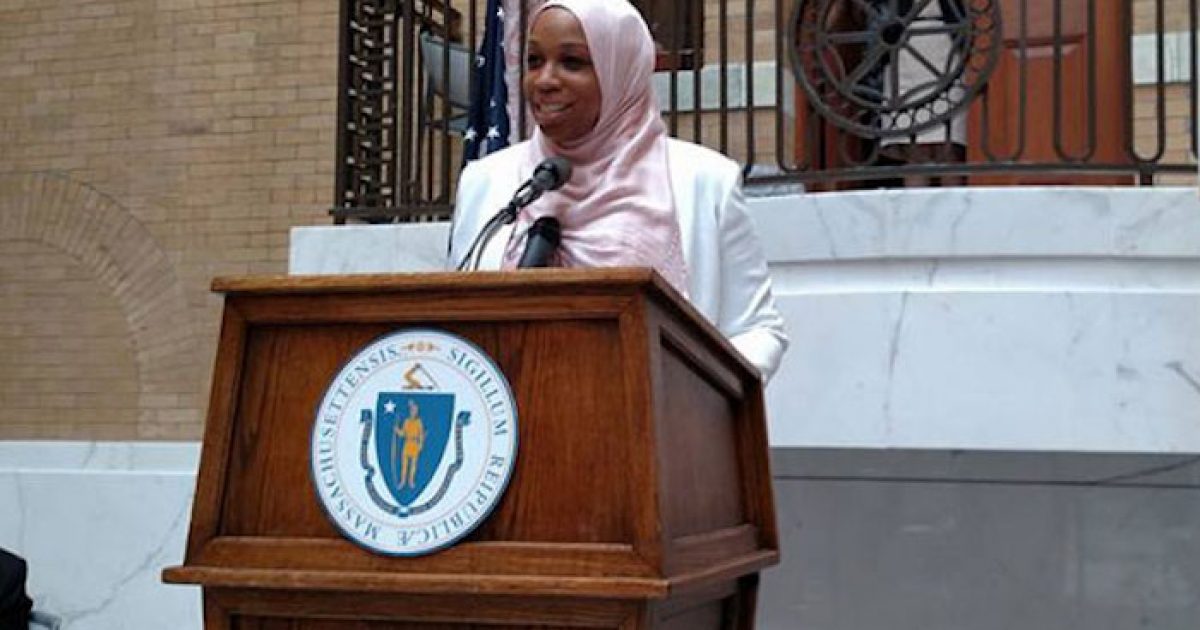 Amatul-Wadud is a “board member for the Massachusetts Council of American-Islamic Relations.”

CAIR is an unindicted co-conspirator in a Hamas terror funding case — so named by the Justice Department.

A CAIR operative recently called for the overthrow of the U.S. government.

Amatul-Wadud, according to the Clarion Project, was as of June 2016 “the general counsel for the Muslims of the Americas, whose spiritual leader is a radical cleric named Sheikh Mubarak Ali Gillani in Pakistan. The organization was previously known as Jamaat ul-Fuqra, when it carried out terrorist attacks in the 1980s and early 1990s. The group is best known for its ‘Islamberg’ headquarters in New York where guerilla training of women has occurred, as seen in this undated footage obtained by the Clarion Project from a law enforcement source. It claims to have 22 “Islamic villages” in 12 states. The Clarion Project identified one such ‘village’ in Texas in 2014. We recently published the heartbreaking testimony of a woman who grew up in these villages in the 1980s.”

“US Rep. Richard Neal, Tahirah Amatul-Wadud make ballot, will square off in Democratic primary,” by Shannon Young, MassLive.com, May 9, 2018 (thanks to Creeping Sharia):

SPRINGFIELD — U.S. Rep. Richard Neal and Springfield attorney Tahirah Amatul-Wadud will both officially appear on the September ballot, setting the stage for a primary showdown — the first for Democrats in the 1st Congressional District in six years.

Secretary of the Commonwealth William Galvin’s office confirmed Wednesday that Neal and Amatul-Wadud had each been certified for the ballot after turning in more than the 2,000 voter signatures, as well as other documents, needed to take part in the Sept. 4 primary.

Neal, who was first elected to Congress in 1988, had filed at least 2,700 certified signatures with the secretary’s office as of May 8 — the deadline for federal and statewide candidates to submit nomination papers to local election officials for signature certification.

Amatul-Wadud, a member of the Massachusetts Commission on the Status of Women and board member for the Massachusetts Council of American-Islamic Relations, in turn, had submitted at least 2,300 certified signatures to the secretary’s office as Wednesday, according to a nomination papers receipt shared by her campaign….