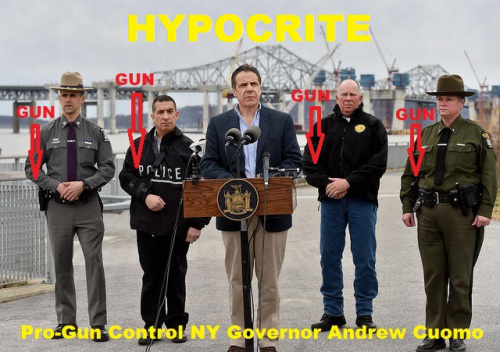 The New York Daily News reports that on April 18, 2018, New York governor Andrew Cuomo warned banks and insurers to stay away from the National Rifle Association (NRA) and the gun industry because of the “reputational risk” they will incur if they do business with either.

“I am directing the Department of Financial Services to urge insurers and bankers statewide to determine whether any relationship they may have with the NRA or similar organizations sends the wrong message to their clients and their communities who often look to them for guidance and support. This is not just a matter of reputation, it is a matter of public safety, and working together, we can put an end to gun violence in New York once and for all.”

In response to Cuomo’s threat, the president of gun manufacturer Hornady, Steve Hornady, announced on Facebook they will stop doing business with the New York state government and state agencies (source: Guns.com):

Who does Gov. Andrew Cuomo think he is, telling New York banks and insurers to blackball the gun and ammo industry?

The State of New York did one of the most despicable acts ever perpetrated by any state by asking New York banks, financial institutions and insurance companies to stop doing business with the gun and ammo industry. While it may not make a difference to New York, Hornady will not knowingly allow our ammunition to be sold to the Government of the State of NY or any NY State agencies. Their actions are a blatant and disgusting abuse of office and we won’t be associated with a government that acts like that. They should be ashamed.

In recent weeks, big-name lenders such as Citi and Bank of America have adopted new policies that could see them cut ties with partnering businesses unwilling to adopt new policies for selling firearms or manufacturing some types of semi-automatic guns — which has in turn brought calls for more regulatory oversight of the institutions with respect to government contracts.

Hornady is one of the premier ammunition suppliers to law enforcement in the country. The company recently was awarded a $19 million contract to provide a new generation of 9mm duty rounds to the FBI.