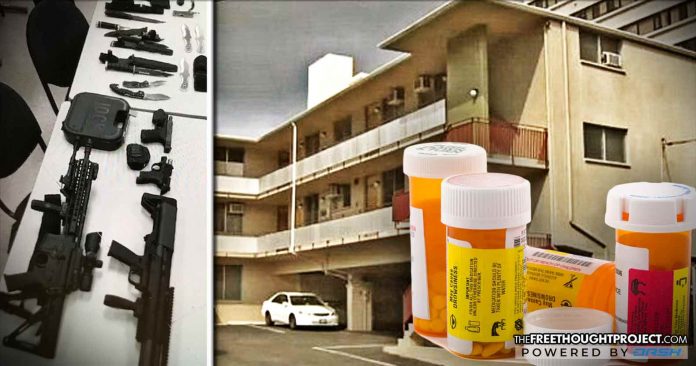 Waikiki, HI – After a man’s social media posts were flagged by the FBI, a tip to the Honolulu Police resulted in officers finding a large cache of loaded weapons during a welfare check at his hotel room.

Hawaii News Now reported that the FBI alerted local authorities to “suspicious” social media posts in which a person was claiming to be a federal agent. The specific contents of the messages or how the FBI was initially alerted has not been made public.

In an email regarding the incident, the Honolulu Police Department stated:

“HPD officers responded to a report of a suspicious male in Waikiki yesterday. The male was located and taken to a hospital for evaluation, where he remains. No charges have been filed at this time.

Investigators recovered the man’s belongings, which included firearms and knives. HPD and FBI investigators are continuing to work on this case, and no further information is being released at this time.”

Strangely, the 38-year-old man reportedly told law enforcement that he was on a mission hunting terrorist cells, according to Hawaii News Now.

The arsenal of weapons found in the man’s possession included:

While weapons were subsequently found to be legally owned by the man, and having them in his hotel room did not violate any laws, the suspect was put on a psychiatric hold after police reportedly found psychiatric medication in his room, which allowed them to confiscate the firearms until a mental health evaluation had been performed.

“There was no danger,” said Mike Dailey, manager at the hotel. “The gentleman was here. He was a guest staying here. He left and then there was an FBI and police investigation.”

“He had a room here and they’re looking at the stuff in his room,” Dailey added. “I don’t know that there are any weapons. I think you’ll have to talk to the police about that.”

The man is reportedly a local resident who has lived in Waikiki for 3 years. Police sources claim that he said he brought the weapons and ammunition to his hotel room over the course of a few days. Law enforcement took him to a local hospital for a mental health evaluation; where, if deemed mentally fit, his weapons could be returned.

Oddly, the scene in the hotel room sounds eerily similar to that of the deadliest mass shooting in modern U.S. history, which is still shrouded in mystery—the Las Vegas massacre at the Mandalay Bay Hotel in October 2017.

Since the attack on Oct. 1, there has been a consistent lack of transparency that has raised questions as to whether some type of cover-up was ongoing. Legitimate inquiry into the attacks has reportedly been shut down at the highest levels, and high-ranking FBI officials in Washington have been accused of working to conceal the information.

The FBI’s “official” narrative goes something like this: suspect Stephen Paddock was a mysterious lone wolf gunman. He was a mystery man and habitual gambler who snapped, bought guns, and shot up a music festival—and no one knows why.

This massive cover-up involves the FBI attempting to hide the fact that they have evidence that the election of President Trump was a catalyst for the radicalization of Paddock—and that other persons of interest could potentially be involved in the massacre.

The rabbit hole is deep.

More recently, on March 25, a man named Francho Bradley—who also claimed to be on a secret government mission—was arrested by Tewksbury Police following a search of his hotel room that uncovered a massive cache of firearms, including an AR-15 with a bump stock, other rifles, handguns, 3 silencers, ammunition, smoke grenades, flash bangs, a rocket launcher, cellular phones and even satellite phones—much of equipment that would be needed to conduct a black-op shooting in the vein of the Las Vegas shooting.

After being given consent to search the hotel room by Bradley, a detective found three parking tickets from Cambridge Street at Anthem Street and Second Street. According to the police report, detectives believed that Bradley may have been out surveilling the area:

As I entered back into the hotel room, Offficers McMahon and Adams stood by with Francho. I entered the room and saw parking tickets from Cambridge at Athenaeum Street and Second Street. Two of the tickets were at the same exact location two days apart and the third was from an area a short distance away on a third day. I found this to be odd because according to Francho’s statements prior he had no ties to Boston or Cambridge but he kept receiving parking tickets. Based on his frequent trips from Cambridge to Tewksbury and arsenal of weapons, my suspicions grew that he may be surveilling an area. It should be noted that I knew there was a major demonstration “March for Our Lives” in Boston that day.”

Perhaps not so coincidentally, Bradley is deeply immersed in the U.S. national security apparatus, as evidenced by a report from Heavy.

While these three events could be completely unrelated, they seem to share some very interesting similarities and are most certainly worth further investigation.