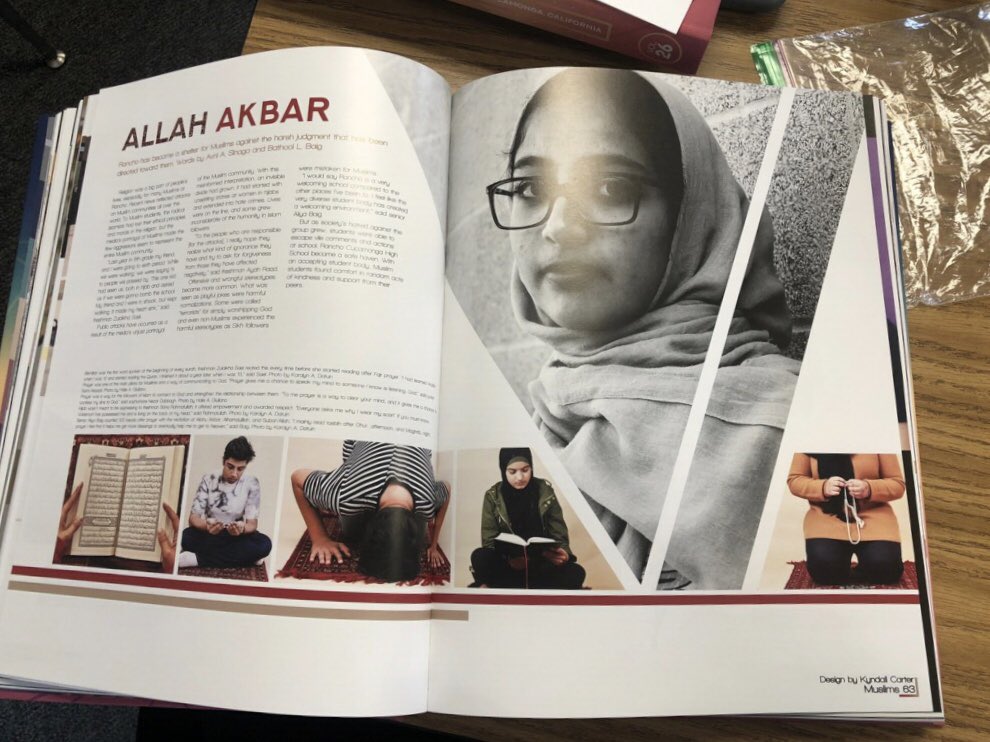 “Allahu akbar” means Allah is greater, i.e., greater than your god. It’s a declaration of superiority. Jihad mass murderers the world over scream “Allahu akbar” as they murder people.” 9/11 hijacker Mohamed Atta reminded himself to “shout, ‘Allahu Akbar,’ because this strikes fear in the hearts of the non-believers.”

And here it is in the Rancho Cucamonga High School yearbook, because they are tolerant, multicultural, diverse, and against “racism.”

Why does it contain these pages on Islam?

Because it is the prevailing view among Leftists today that Muslims are persecuted, harassed and discriminated against on a large scale in America today, and that this happens because of Americans’ ignorance of Islam.

Both claims are nonsense.

The FBI’s latest hate crime statistics show that Jews are twice more likely to be the victims of hate crimes than Muslims. Yet there is no presentation on Judaism in Rancho Cucamonga High School’s yearbook.

And if anyone does have a negative opinion of Islam, it is because of jihad terror, not ignorance of Islam.

These pages on Islam are in the Rancho Cucamonga High School yearbook as a testament to how successful Islamic advocacy groups and their Leftist allies have been in deflecting attention away from the reality of jihad terror and portraying Muslims in the U.S., however spuriously, as a victim group needing special consideration and accommodation.

I can’t believe this!!! A high school in Rancho Cucamonga has a spread in their year book that says ALLAH AKBAR. Not one mention of Christianity in the year book! pic.twitter.com/7ln7DgRyt9