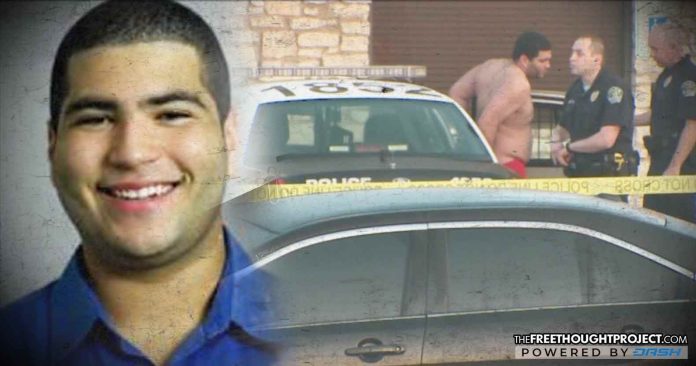 Austin, TX – When a SWAT team initiated a no-knock raid in search of cannabis, they were met with gunfire, and while the resident surrendered as soon as he realized his home was being raided by police, the fact that he opened fire on the intruders and shot one of them in the leg has resulted in a 13-year prison sentence.

When a SWAT team broke down the door and charged into the Harrell family’s house in the early morning hours of April 14, 2016, they claimed that the intrusive operation was justified, because they believed 18-year-old Tyler Harrell was running a drug ring out of his parents’ home.

When Tyler Harrell was woken up by what he believed were burglars breaking into his home, he did what many gun owners would do, and he grabbed his firearm and confronted the intruders. He used his legally-owned AK-47, and while he did not kill any of the officers, he did wound one officer by shooting him in the knee.

Lisa Harrell told KVUE News that she believes her son only opened fire because he thought his family was being robbed. “[Tyler] came running out with his gun, thinking someone was intruding in our house, and he started shooting down the stairs,” she said. “I know my son thought there was an intruder in the house.”

Hours after the shooting, police confirmed that “another SWAT team member returned fire, but did not hit Harrell, who surrendered to police within minutes,” indicating that as soon as Harrell realized he was firing at police officers, he stopped and let them arrest him without a fight.

When officers searched the home, they found one ounce of cannabis, which would justify a misdemeanor charge against Harrell. However, because the officers initiated a no-knock raid before dawn, and Harrell attempted to protect his family from the intruders, he was charged with attempted capital murder.

During the trial, Harrell’s psychiatrist testified that at the time of the shooting, he was “suffering from post-traumatic stress disorder after an incident four months earlier in which he and his friends were robbed by a masked gunman,” and the gunman shot Harrell, before Harrell “wrested the gun away from the man and chased him out the door of his friend’s apartment,” according to a report from the Austin Statesman.

However, it was the testimony from Officer James Pittman that apparently pulled at the heartstrings of jury members. He was the only person injured by Harrell’s gunfire, and he said the bullet wound in his leg kept him from playing with his kids now and would force him to get knee replacement surgery one day.

Pittman also criticized the “Not Guilty” verdict from another Texas case in which a homeowner shot and wounded three police officers when they initiated a no-knock raid on his house. Ray Rosas spent nearly two years in jail awaiting his trial, and his actions were ruled justified based on the fact that he was acting in self-defense and did not know the intruders he was shooting were police officers.

Rosas was acquitted, despite the fact that 11 police officers testified against him. However, in the case of Tyler Harrell, his lawyer argued that the 18 SWAT team members who attended court in tactical gear to show their support for Officer Pittman, further demonized Harrell in the eyes of the jury.

“Look at this gallery. You don’t think this is a lot of political pressure for these people?” Lawyer Michael Chandler told the jury.

When the trial shifted to a debate over whether Harrell acted in self-defense, it served as a distraction from the fact that the drug raid on his home was an absolute failure, and officers were never able to prove that Harrell was a “large drug dealer” of marijuana and cocaine, which was the claim they used to justify obtaining a search warrant for the raid in the first place.