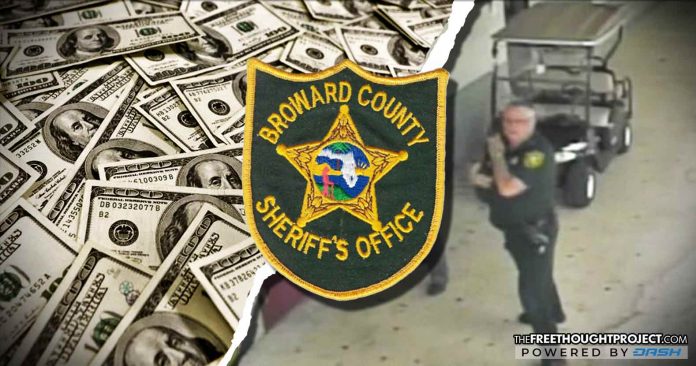 Parkland, Florida – The police officer who was publicly shamed after he was caught by surveillance camera waiting outside of a high school while children were shot and killed inside, was allowed to quietly retire and is now making more than $100,000 a year from state pension funds.

Scot Peterson, 55, a sheriff’s deputy who served as the school resource officer at Marjory Stoneman Douglas High School was allowed to retire one week after a former student opened fire, killing 17 people on Feb. 14. Peterson was openly criticized for his blatant lack of response during the shooting, but after a few weeks, his name faded from the headlines.

The former deputy is now receiving a state pension of $8,702.35 each month, which equals around $104,428 per year, according to a report from the Sun-Sentinel. Peterson worked in Broward County for 32 years, and a spokesperson for the sheriff’s department confirmed that he is being investigated for his actions during the shooting, but they did not say how long the investigation would take.

One of the main questions that was being asked in the immediate aftermath of the shooting at Stoneman Douglas was why suspected gunman Nickolas Cruz was not apprehended by a school resource officer during his rampage, especially considering the fact that his troubled record—which showed that he was disciplined 58 times by the school district between 2012 and 2017—should have made officials aware that he may return to campus after he was suspended.

Cruz also left several threatening comments on social media in which he stated that he planned to become “a professional school shooter,” and he directly threatened other students with physical harm. The FBI received multiple credible reports about Cruz in the months leading up to the shooting, and police were called to his home nearly 40 times in recent years over reports of “mentally ill person,” “child/elderly abuse,” “domestic disturbance,” and “missing person.”

Yet not only was Cruz allowed on campus on the day of the shooting, but one student claimed she ran into him in the hallway and jokingly told him she would have expected that he would be the one to carry out a school shooting, while gunshots rang out in the background. Police claim Cruz exited the school by blending in with other students who were fleeing.

As the veteran officer who was stationed at the school, Scot Peterson should have been aware that a suspended student was threatening violence, and when he heard reports of gunshots, he should have been the first one to confront the shooter.

In the limited surveillance footage that has been released from the day of the shooting, Peterson can be seen running towards a golf cart at about the same time the first 911 call was made to Coral Springs Police reporting a shooting.

It was during that time that Peterson reportedly said over his police radio, “Be advised we have possible, could be firecrackers, I think we have shots fired, possible shots fired—1200 building.”

According to a timeline of the shooting from the Sun-Sentinel, Cruz was picked up by an Uber at 2:06 p.m. and dropped off at the school at 2:19 p.m. He then entered the freshman building at 2:21 p.m.

The news that Peterson waited outside of the building while a massacre was ongoing and children were being killed inside sparked outrage among many, and in response, Broward County Sheriff Scott Israel said, “I am devastated. Sick to my stomach. He never went in.”

If Peterson had chosen to stay on the job, he would have been suspended, but he likely would still be receiving his full paycheck. If he had confronted the shooter as soon as he heard reports of gunshots, the death toll from the massacre could have been significantly lessened.

Instead, Peterson was allowed to quietly retire, and the treatment he received serves as a reminder of both Broward County’s long history of police corruption and the lack of accountability police officers in the United States face on a daily basis.

From a police captain who was caught on camera beating a woman in a bar, to a police detective who was found guilty of creating child pornography involving girls as young as 13 years old, police officers are often allowed to quietly retire after they have been caught committing heinous crimes, and Scot Peterson will likely be just another name on the list of corrupt cops who are now enjoying their state pensions, while escaping all consequences for their actions.