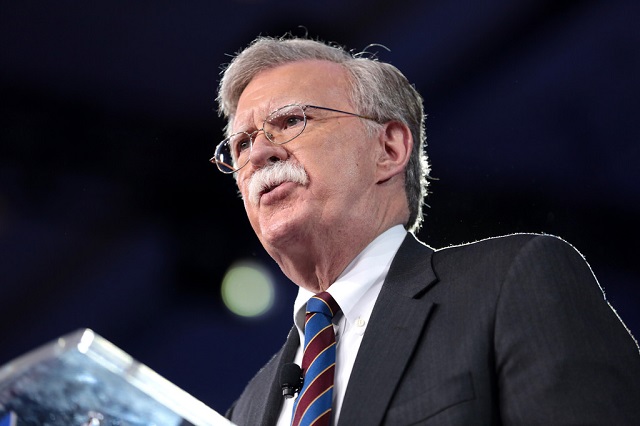 Libya’s leader Muammar Gaddafi gave up his nuclear weapons program around 2004 in an attempt to normalize relations with the US only to be sodomized to death by Western-backed rebels a few years later.

Kim Jong-un has said repeatedly he doesn’t want to meet the same fate and yet Bolton went all over TV two weeks ago saying again and again Libya is the “model” to follow.

Donald Trump’s historic meeting with Kim Jong-un has been thrown into uncertainty as North Korea warned it could be cancelled over US military exercises and if Washington presses ahead with its one-sided demand for Pyongyang to give up its nuclear arsenal.

Kim Kye-gwan, North Korea’s deputy foreign minister, warned on Wednesday that Pyongyang was not interested in talks that would pressure the rogue state to “unilaterally” give up its nuclear programme, taking aim at “unbridled remarks” by John Bolton, the US national security adviser, and other high-ranking White House officials.

In a statement issued by the North Korean Central News Agency [KCNA], Mr Kim took issue in particular with Mr Bolton’s references to the so-called Libya model of nuclear abandonment and his statements on “complete, verifiable and irreversible denuclearisation.”

Mr Kim claimed the remarks cast doubt on America’s sincerity, underlining that his country was not Libya, which met a “miserable fate.”

He added: “This is not an expression of intention to address the issue through dialogue. It is essentially a manifestation of awfully sinister moves to impose on our dignified state the destiny of Libya or Iraq which had [sic] been collapsed due to yielding the whole of their countries to big powers.”

This is not an expression of intention to address the issue through dialogue.

[…] It is absolutely absurd to dare compare the DPRK, a nuclear weapon state, to Libya which had been at the initial stage of nuclear development.

We shed light on the quality of Bolton already in the past, and we do not hide our feeling of repugnance towards him.

If the Trump administration fails to recall the lessons learned from the past when the DPRK-U.S. talks had to undergo twists and setbacks owing to the likes of Bolton and turns its ear to the advice of quasi-“patriots” who insist on Libya mode and the like, prospects of upcoming DPRK-U.S. summit and overall DPRK-U.S. relations will be crystal clear.

Bolton has sabotaged such peace talks in the past and now he’s doing it again.