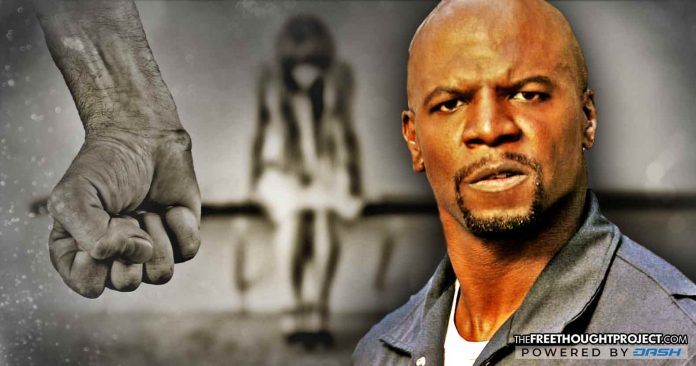 Famous actor and former NFL linebacker Terry Crews was one of the few men who spoke out during the height of the #MeToo movement and revealed that he had been sexually assaulted by a Hollywood executive. He is now speaking out and giving insight into the ways in which the establishment enables predators who use their money and influence to silence their victims.

In an interview with Megyn Kelly on the Today Show, Crews used the analogy of “If the police rape you, who do you go to?” to describe the way he was treated after he was assaulted by an executive within his own agency, and he attempted to report the incident to superiors the day after it happened.

Crews was represented by William Morris Endeavor at the time and he said he was at an industry even when the head of the motion picture department, who has since been identified as Adam Venit, walked up to him and groped him.

“I was groped—publicly, with my wife—at an industry event, and this guy comes at me and he gropes me, in front of everybody. I smacked the guy’s hands back and I’m like, ‘What are you doing? Leave me alone,’ and he comes back and does it again,” Crews said.

While many questioned why Crews did not react by punching or hitting his assailant, he said he felt like he was trapped at the time, and that as a 240-lb. Black man, he worried that police would believe the executive’s testimony before they would believe his own.

“Your job is to protect me and you are assaulting me,” Crews said, noting that when he went to his bosses at William Morris Endeavor the next day to report the incident, he found that Venit’s status apparently made him exempt from discipline. He said he then felt like he was stuck and there was nowhere he could go to report the assault.

“If your job is to protect me, who do I go to? If the police rape you, who do you go to? This is the same. And you know what they do? They try to force you into proving a conspiracy, and they know you can’t prove that. Because you don’t have footage of two people sitting in a room, conspiring,” Crews said. “But you can prove a complicit system. That’s what you can prove.”

Crews has since filed a lawsuit against WME, and in the interview, he accused the agency of contributinglarge donations to the TIME’S UP Legal Defense Fund, in order to make it appear as though they supported survivors of sexual assault.

While both WME and Venit have denied all allegations from Crews, and Venit is still working for the agency, Crews said he chose to speak out about his story when he saw both men and women on social media mocking and criticizing actresses who claimed they were sexually harassed and assaulted by Harvey Weinstein.

Crews shared his story in a statement on Twitter in November 2017:

“This whole thing with Harvey Weinstein is giving me PTSD. Why? Because this kind of thing happened to ME. My wife n I were at a Hollywood function last year n a high level Hollywood executive came over 2 me and groped my privates. Jumping back I said What are you doing?! My wife saw everything n we looked at him like he was crazy. He just grinned like a jerk. I was going to kick his ass right then— but I thought twice about how the whole thing would appear. “240 lbs. Black Man stomps out Hollywood Honcho” would be the headline the next day. Only I probably wouldn’t have been able to read it because I WOULD HAVE BEEN IN JAIL. So we left.

After he went public about the assault he endured, Crews then began speaking about the relentless harassment and intimidation he faced from the “powers that be” in Hollywood. After he went to the Los Angeles Police Department to file a report, he was approached by reporters from TMZ, and he claimed that there was no way the outlet could have known that he was filing the report unless they had “paid informants” inside of the LAPD

“LAPD task force detectives let me know these people don’t play fair. There are a lot of secrets to protect, and they will do anything to keep them,” Crews wrote on Twitter. “The town is compromised. But me, and my team, are not. If I were to have a timely “accident”—you know where to look.”

The analogy used by Crews also rings true in the sense that while some Hollywood executives will face consequences for their unspeakable actions, many will be protected by the industry, and will never face charges. The same is true for police in the United States.

While the #MeToo movement was taking over media headlines in December 2017, The Free Thought Project reported, “As Hollywood sex abuse continues to be exposed, victims and their families are finally starting to see the potential for justice and closure they have long-deserved. However, as the Weinsteins and the Spacey’s watch their careers burn over the allegations of sexual misconduct, the media and essentially everyone else remains conveniently silent on the horrifying reality that is sexual misconduct by police.”

A 2016 study exposed the startling fact that police officers are arrested about 1,100 times a year, or roughly three officers charged every day. Many of these arrests are over unspeakable sex crimes that ruin the lives of children, women, and men across the country.