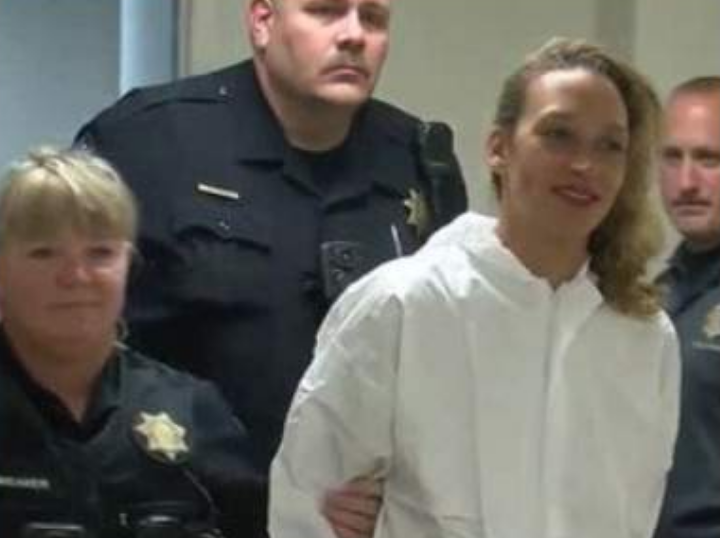 Without women’s vigilance in spotting Amber Alert SUV, Tulsa child-stabbing case might have had ‘even worse outcome’

Taheerah Ayesha Ahmad, 39, and her 8-year-old daughter Hafsa Hayle — who also goes by Hafsa Hussein — were found in a parking lot near Cameron and Main streets about 12:20 p.m. Tuesday. The girl was found safe.

The 11-year-old child who was stabbed is in critical condition, police said. She was described as in “very serious” condition as of Tuesday evening, adding that she was unconscious and underwent intubation.

Ahmad is accused of binding and gagging two of her three daughters at 7:40 p.m. Monday at their residence in the 500 block of Mohawk Boulevard, Tulsa Police Officer Jeanne MacKenzie said. The 8-year-old helped a third child, who is 9, escape when Ahmad began stabbing the eldest child, MacKenzie said. The child was able to contact relatives at a nearby residence, a police report states.

After Ahmad was taken into custody, she reportedly told investigators during interviews that she had become upset “because of the way they were reading and looking at her,” according to a police report.

While Ahmad was restraining her daughters, the 11-year-old fought back, which prompted Ahmad to stab the girl an estimated “50 to 70 times” and strike her over the head several times with a pick-axe before then trying to set the home on fire, the report says.

The report also says Ahmad wanted to burn down the residence to “further ensure that (the 11-year-old) was dead.”

The 11-year-old, according to police, had dozens of stab wounds to the torso along with puncture wounds to her legs, neck, hands and face when she was found.

Police said the woman then drove away from the area with the youngest daughter in her vehicle.

MacKenzie said Monday evening that there was no known history of child abuse or domestic violence. However, she said there “have been some issues talked about within the family.”

During the forensic interview, one of the children told investigators that Ahmad had held them all hostage for the past week while withholding food and water from them.

The child also said their mother often threatened to stab them if they ever attempted to leave their bedrooms without permission.

Ahmad, in a police report, was described as being “very upset” with the 8-year-old. She also was accused of calling one daughter the devil and expressing hatred for another.

The arrest may never have happened if the two women hadn’t spotted Ahmad’s vehicle in the Tulsa Arts District, Sgt. Shane Tuell said. Officers quickly responded to the parking lot, where they captured the woman and secured the child without incident.

Wilson and Brazendeh were heading to lunch and discussing the Amber Alert case when they spotted Hafsa inside the vehicle.

“She was sitting in the seat, and it looked like she was alone,” Wilson said. “I asked myself, ‘Who leaves a child alone in downtown Tulsa?”

After noting that the girl in the vehicle resembled the child for whom authorities had been searching, Wilson called the police.

“She had too many things in common,” said Wilson. “I had to call the police. If I ended up being wrong, I would apologize, but I didn’t want to risk not calling them.”

Wilson described the child as “in a good mood” and even noticed her playing with the steering wheel at one point with a smile on her face.

At some point she saw Ahmad apparently sleeping in the backseat of the vehicle.

As a mother of two children, ages 5 and 11, Wilson was disturbed that any mother would harm her own children.

“I don’t understand how she could hurt her own babies,” she said. “It was one of the reasons why this story intrigued me.”

Officers initially requested paramedics but called them off after determining the girl was not hurt.

The Police Department received a significant amount of support and engagement from the community throughout the ordeal, illustrating why the agency issues Amber Alerts only in dire circumstances.

“I think that really helps us because it allows us to inform the public that we’ve got something serious that we need their help with,” Tuell said. “By doing that, we’re able to get a quick resolution to very serious incidents such as this.”

Tuell said he can only guess what would have happened if the women hadn’t recognized Ahmad’s vehicle.

“If this had gone on, your guess is as good as mine on what the outcome could have been,” he said. “Could they have tried to flee to a different county or state or country, or could this have had an even worse outcome had this gone on? That’s extremely debatable, but luckily we don’t have to determine what that would have been because it came to a quick resolution.”

Ahmad, who reportedly said she recently moved to Tulsa from Tennessee, was in the downtown area following the incident because “she likely didn’t have a plan in place or anywhere to go,” Tuell said.

He said the three children would be placed in the custody of the Department of Human Services. DHS also was present during their mother’s police interview.

Ahmad is being held in the Tulsa County jail without bond on assault and battery with a deadly weapon with intent to kill, first-degree arson and child neglect complaints, jail records show.