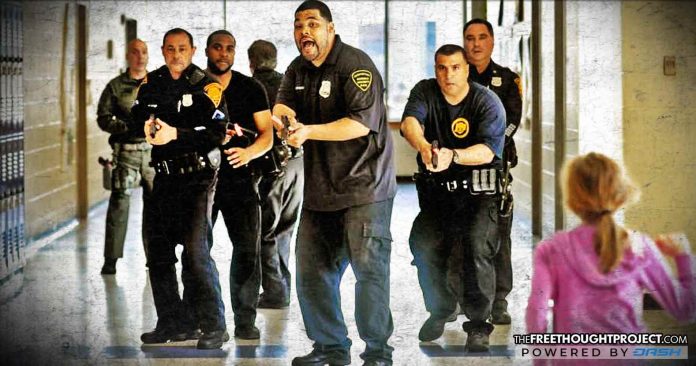 Denver, CO – Community members are horrified after they say police officers conducted a classroom-to-classroom search with guns drawn and interrogated teachers and students in a charter school, all to look for a student who was absent. While the police department released a statement justifying the incident, teachers are claiming that police are lying “to save face.”

“The staff and students were traumatized,” Lucas Ketzer, principal at Rise Up Community School, toldthe Denver Post as he described the way a group of police officers raided the building in their search for a student who was not in attendance.

Officers stormed the school and began searching the classrooms, and Ketzer said that when a science teacher “told officers they could not search her room without a warrant” they pushed her aside, and entered the classroom where they “pulled students out of their chairs, removed their hats and asked them for their IDs as they searched.”

“When I was sitting in class, they came bursting in, and then they were like in everybody’s faces, like looking at us, and I felt so unsafe,” student Mary Jimenez told Padres & Jóvenes Unidos. She said the officers singled one student out, grabbed him by the arm, and forced him to remove his hat so that they could compare him to the photo of the student they were targeting.

The principal also told the Post that the officers scoured the building with their guns drawn and when a faculty member opened a back door to check for students, “multiple officers pointed their guns at her.”

However, when the Denver Police Department released a statement responding to the incident, it claimed that the “officers that were inside, did not draw their weapons at any point during the search for the suspect.”

“On April 24th, 2018, Denver Police officers responded to Rise Up Community School in search of a suspect wanted for attempted first-degree murder—this incident occurred the night before in another metro-area jurisdiction. Officers received information that the suspect was in the school, and given the nature of the allegations, believed the suspect posed a possible threat to students and staff.

When officers arrived, they set up outside of the school to ensure the suspect did not leave the building. Given the imminent and potentially dangerous circumstances, and confirmation from a staff member that the suspect was inside, a warrant was not required to search inside the building for the suspect.”

While the statement claimed that police worked “with the principal to eventually gain access to the building,” and then after the raid, “staff met with the principal to discuss the situation and offered a follow-up meeting,” teachers and faculty members at the school are insisting that the opposite is true.

Ketzer told ABC 7 that police “never told him there was any threat,” and when he told the officers that the student they were looking for was not at the school, they refused to believe him and proceeded to search every classroom in the building.

“Those lies put the safety of 100 students at risk and those lies are meant for them to save face. I want people to be held accountable,” Ketzer said.

The school principal also noted that the majority of the students at Rise Up Community School came to the charter school after they had struggles at other schools, many of which involved bad experiences with police. As a result, Ketzer said he is concerned that being interrogated by officers when they were attempting to learn in school, would only serve to further destroy the students’ trust in police.

Padres & Jóvenes Unidos is condemning the incident and calling it an example of why police should not be given open access to schools. In a statement, the organization called for an investigation and accused the Denver Police Department of choosing “to put students and teachers in harm’s way.”

“After being informed by the administration that the student was not at school, DPD waited approximately fifteen minutes—during which time they conferred with the DPS Department of Safety—before conducting a search. They refused to produce a warrant when asked, and armed officers went from classroom to classroom harassing students and staff. At one point weapons were drawn on a member of the faculty,” the statement said.

Footage of the police raid on the school has yet to be publicly released. If you would like to contact the Denver Police Department to voice your opinion on this incident, call (720) 913-2000 or visit the department’s Facebook page.