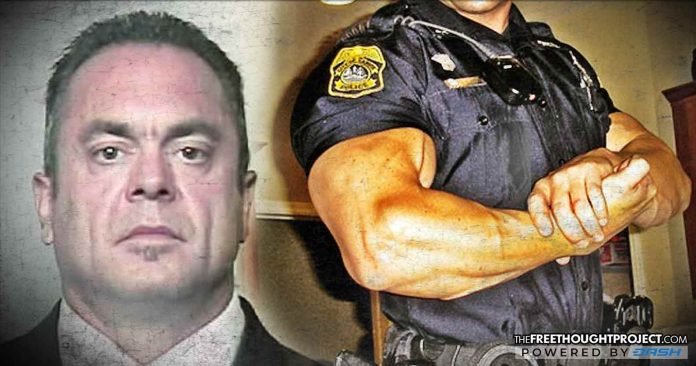 Edmond, OK — There is no question that many police officers use performance-enhancing drugs. In fact, the problem of police steroid use became so bad, in 2004, the DEA intervened to warn of the “possible psychological disturbances” of roid-raging cops.

Not only do cops vehemently resist being drug tested by their departments, claiming it is a violation of their civil rights, they are also frequently caught selling steroids, as the case below illustrates.

Former Edmond police officer Christopher Thomas Caplinger served the citizens of Edmond, OK for over 20 years. During this time he was likely building up his customer base as well as his steroid empire which he would grow to epic proportions.

The indictment, filed earlier this month, alleges Caplinger, 55, was “the head of this drug trafficking organization, which manufactured and distributed anabolic steroids throughout the United States.”

According to the indictment, Caplinger made so much money that he was burying it in his backyard like a scene out of a mafia movie.

Caplinger wasn’t only selling steroids but he was importing products and ran his own manufacturing enterprise. As News OK reports:

As part of the conspiracy, Caplinger rented a commercial space in Oklahoma City to manufacture and distribute the steroids, according to prosecutors. The business front was reportedly for an auto sales company, “but, in reality, had little to no involvement in the automobile trade.”

Caplinger obtained raw steroid product from foreign countries, including China, according to the indictment. The raw product would be sent from the foreign countries to individuals in the United States who then “reshipped” the product to Oklahoma City, grand jurors allege. Schott was an alleged “reshipper.”

Along with Caplinger, Donald Ray Vincent Jr., 54, of Edmond; Deborah Ann Crawford, 46, of Oklahoma City; and Michael Brandon Schott, 34, of Newport News, Virginia, are charged in Oklahoma City federal court with conspiracy to distribute and possess with intent to distribute anabolic steroids.

If convicted, Caplinger faces the possibility of spending years in prison. However, if history is any indicator, all too often, police use their “exemplary” records as public servants to avoid jail all together—even when they rape society’s most vulnerable.

Unfortunately, as TFTP has reported at length, cops are frequently busted for dealing in and taking steroids.

“This is one of the dirty little secrets of American law enforcement,” says Gregory Gilbertson, a former Atlanta cop who teaches criminal justice in the Seattle area and works as a legal expert on police standards and practices, according to Alternet. “Steroid testing is declining, and I think there’s an attitude in all these agencies of ‘see no evil, hear no evil, speak no evil’ because they don’t want to know about it. Because if they know about it, then they have to address it.”

While anyone should be able to ingest any substance they want, the idea of public servants—whose jobs involve physical interactions with innocent citizens—taking drugs known to induce rage, hostility, and aggression is chilling, to say the least. However, as Alternet pointed out, the cases of cops using and selling steroids are anything but isolated.

These are some of the cases that have made news in the past year, though there likely are others that have not been revealed publicly:

The dangers of cops taking steroids are obvious, as the rage associated with their use can become uncontrollable. All too often, we see police officers immediately escalate situations to violence when de-escalation would have been far easier and safer. Steroids could be the reason.

“I keep seeing all of these cases where the level of anger and violence shown by officers makes no sense,” Gilbertson says. “And when things don’t make sense, they don’t make sense for a reason…Maybe steroid rage is a reason so many police officers seem so angry and aggressive.”

Cops on the juice feel indestructible as if they have superhuman strength.

Or as the DEA puts it, “The idea of enhanced physical strength and endurance provides one with ‘the invincible mentality’ when performing law enforcement duties.”

“Reasonable suspicion should be raised if they shoot somebody or beat the living daylights out of somebody,” Dan Handelman, a founding member of Portland Copwatch told Alternet. “In some of these recent cases, the officers seemed to be pumped up and were not necessarily working in a calm and level-headed manner. We wonder how much of this was coming from natural adrenaline and how much coming from other substances.”