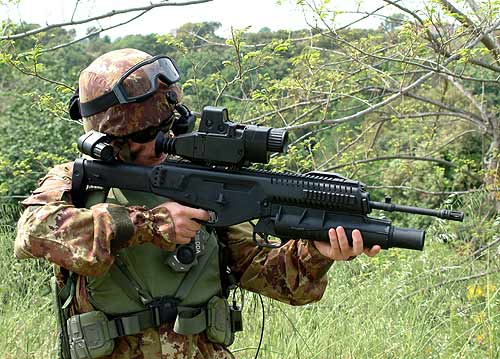 The following is intended to serve as a useful guide to various activists, protesters and other completely non-violent folk who happen to be packing knives, guns, rocks and grenades. You will encounter various law enforcement and military personnel– this is how not to get shot by them. 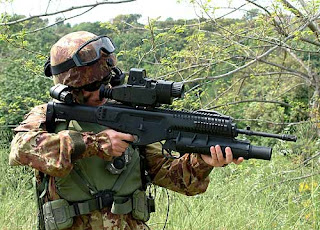 First of all it’s important to remember that if you attack an armed man in a uniform, he will very probably shoot you.

Even given the most restrictive Rules of Engagement in the world which forbid him from opening fire unless he is outnumbered 600 to 1, and only when he has been given specific authorization by the UN to use deadly force– there will still come a time when he will open fire on you. This will occur when he feels that he or his comrades are in danger. At this point there will be bullets headed your way, and no matter what you learned at your Madrassa or in Protest Studies at Evergreen State High University, you are not bulletproof. Really, you’re not.

The good news is that there is a very easy way not to get shot.

That means not trying to disembowel them with your peaceful knife and not throwing rocks at their head. Because while you might think that legal activism includes attempted murder, the men in uniform think that attempted murder should result in sudden death. And when that happens you will realize that fanatical passion for your poorly thought out cause and a medieval weapon are no match for trained soldiers who have guns and know how to use them.

The thing to remember is that while just about every revolution you read about does involve a crowd of people rushing at armed men, those people usually end up dead or in a lot of pain. You should expect to have the same thing happen to you. Putting on a Kefiyah or a pair of Birkenstocks does not exempt you from the laws of physics, or the code of common sense. Putting your wacky beliefs about a pedophile who rode a flying horse in a dream aside, if you attack someone, you should expect them to respond. And if they have a gun, they will respond with bullets.

At that point you will either become a martyr or the world’s ugliest man.

Since the dawn of time, men have guarded the borders of their nations. The border indicates that the lands within are the possession of their tribe and their chieftain. That border may only be crossed with the permission of the laws of the people who rule over it. To cross that border without their permission is to invite war, or at least a shower of arrows, spears or more lately, bullets. To cross that border for hostile purposes is to take your life in your hands. And unless you have an army with you, those hands are slick, greasy and operated by a mind completely devoid of common sense.

Similarly since the dawn of time men have responded blow for blow, rock for rock and fist for fist. If you claim to be non-violent, that may remove from you the risk of suffering preemptive violence, but it does not give you license to engage in violence yourself under the dubious shield of words. Because words are only good for fighting other words. Once you have a weapon out, then you have put words such as “non-violence” or “pacifist” or “youth” aside. You have given up the moral protection of presumed innocence, for a life and death struggle. And if you do not have the stomach for the consequences of that struggle, then you should not raise that knife or that stone. Because there will be no use complaining afterward about disproportionate violence.

It is also written in the codes of common sense, that only the attacker can be guilty of disproportionate violence, not the defender.

It is the business of the defender only to repel you with as little damage to himself as possible. If you have a rock, you should not expect him to put down his gun, and throw rocks at you. And if you have a knife, you should not expect him to set aside his gun for a sharp blade. This is not a duel of honor, but an exchange of force intended to result in injury or death. His business is not to mete out an equivalent level and method of force to yours, but to dispatch you as quickly as possible. Prior to your attack on him, his concern was for your safety. After your attack on him, his concern is only for his own.

What you need to understand is that for you violence is political. To soldiers and law enforcement officers, violence is only a tool. In your mind, your attempt to kill is noble, while his attempt to kill you is vile and cruel. In his mind however there is an equation, violence set against violence.

He does not particularly care what you believe, just that you not attack him while you are believing it. To you he is only a rage puppet in a political or religious narrative. To him, once you attack you are nothing more than a moving target. Understanding this will help you to not get shot. Failing to understand this is how martyrs are made. But the thing about martyrdom is that the health plan is terrible and there’s no long term prospects to it at all.

The difference between terrorists and and soldiers, is that terrorists want to kill people, but lack the necessary skills to do it well. While soldiers have the skills to kill people, but would rather not do it. When angry people with rocks, knives, crowbars and a few guns attack trained personnel with guns, the victory goes to the people who are trained to kill, not to those who want to kill. And when the blooded radicals complain about disproportionate force, what they’re really doing is whining about how surprisingly hard it is to kill people.

The average radical, lefty or Islamic, is as stupid as he is vicious. His cleverness exhausts itself in invective and rhetoric, which he discovers has surprisingly little application in a firefight. What is left is a would be murderer who rather late in the game discovers that he is trying to kill people, who are better at killing than he is. And that he came woefully unprepared for the encounter. Part of his misguided thinking is the belief that a knife or a rock are more moral weapons than a gun. They are not. A gun is the most moral weapon invented because it is efficient, quick and deadly. Killing a man with a knife is positively horrifying compared to shooting him in the head. Soldiers and law enforcement officers understand this. Subconsciously so do radicals, which is why they long for the knife, the rock and the nail studded bombs. If they kill, they prefer to be brutal and cruel about it.

The terrorist is utterly terrible at the art of war, but excels at the art of making his innocent victims suffer. The soldier dispatches his targets quickly and cleanly. For the terrorist however, inflicting agony is the sadistic purpose of the entire exercise. The suicide bomber gives himself a quick death, while mutilating those in his vicinity. He spreads horror and shock. And of course terror.

But the media finds something awful about the soldier who executes his target with one round to the head, and something faintly heroic about the suicide bomber “making a statement” by taking away the arms of a 13 year old girl. Because the media radicals admire murderous passion, but find something horrible about the detachment of the soldier just doing his job. To kill horribly because of passion is somehow better in their eyes, than to kill cleanly and dispassionately to keep the people around you safe.

But terrorists only exist when they are tolerated. And they are tolerated by people who do not think like soldiers, but think like the media. Who want to find ways of making terrorists less angry, rather than finding ways to make more terrorists dead. Such people write narrowly restrictive rules of engagement, prosecute soldiers for defending themselves, and are outraged when a bullet prevents a massacre, rather than being outraged by the planned massacre instead.

But let us be clear about it. When you pick up a knife or a rock or a gun, you are not facing the politicians or the generals who answer to them. You are facing men who bear you no particular ill will, but do want to get home to their families that night or that month or that week. And if you do anything that risks interfering with that, they will shoot you.

They are just guarding the front lines. They are not politicians. They just have guns and know how to use them. And if you attack them, you will die. And in that moment you will realize that neither your moving poems or your Koran, will do you the least bit of good. Because while you have the passion, they have the training. And the best to not be shot by men trained in the art of violence, is to put down the knife, the rock or the gun and walk the other way.

Another Democrat Calls For “Obliterating” Trump Supporters After He Couldn’t Win An Election And He Should Be Investigated
January 29th, 2020 Right Wing Tribune