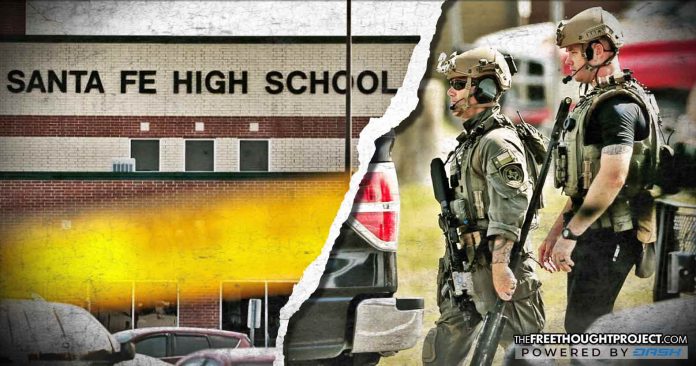 Santa Fe, TX — Last week, a 17-year-old high school student allegedly brought a .38 caliber handgun and a sawed off 12-gauge shotgun into Santa Fe High School and began shooting students and teachers. Now, as more details emerge, we are learning that some of the victims could’ve been killed by police.

According to Galveston County Sheriff Henry Trochesset the gunfire in the school lasted a half an hour. During that time, police were engaged in a shootout with the gunman for 25 minutes, according to authorities.

When the gunfire finally ceased, the gunman was alive while eight students and two teachers were killed. On Monday, Trochesset told CNN that officers arrived quickly and engaged the shooter in the school’s art lab section just four minutes from the time of the first shot.

After laying out the timeline, Trochesset made a damning admission. According to the report from CNN:

But it’s unclear whether all the victims were shot by the suspect, or whether some were shot by deputies during the crossfire. Trochesset said authorities are waiting for the medical examiner’s autopsies to make that determination.

A “decent amount of cameras in the school” will help investigators piece together a timeline, Trochesset said.

The idea that police may have killed some of the victims is chilling.

According to police, the suspect told investigators he acted alone and spared people he liked because he wanted his story told. Now, however, that story may a take turn and involve police officers.

As the victims and their families try to imagine why a person would carry out such a horrific act, some insight is now emerging. One of the victims, 16-year-old Shana Fisher, had reportedly rejected the shooter’s advances for months. A week before the shooting, Fisher stood up in class and publicly proclaimed that she did not want to go out with him.

Sadie Baze, Fisher’s mother said she believes that embarrassed the shooter so much that he targeted her.

“One of the shotgun shells was for my daughter,” she said.

Officer John Barnes who did the opposite of what police did in the Florida school shooting, was also shot as he engaged the shooter. He survived and is expected to make a recovery.

Attorneys for the gunman, Robert Barfield and Nicholas Poehl spoke to media over the weekend and noted that their client “appears to be in shock,” adding that he is “not doing well” and is “confused.”

As TFTP has reported on numerous occasions, the majority of mass shooters have links to psychological medications that carry serious warnings for side-effects on their labels.

Stephen Paddock, Omar Mateen, Gavin Long, Eric Harris, Dylan Klebold, James Holmes, and Nikolas Cruz, all have one thing in common other than the mass murders they carried out. They were all reportedly taking prescription drugs which alter their state of mind and carry a host of negative side effects ranging from aggression and suicide to homicidal ideation.

As the details continue to unfold over this most recent tragedy, hopefully the public and the families of the victims will not be kept in the dark as they deserve to know the truth.