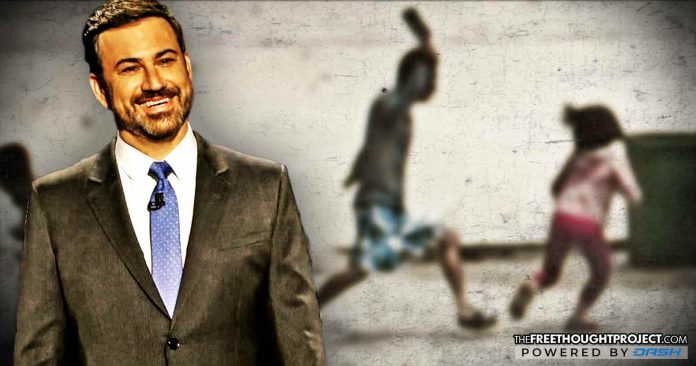 After the tragic shooting in Texas, in which a 17-year-old teen broke multiple gun laws, stole his father’s guns, and murdered innocent children and adults, gun grabbers jumped at the opportunity to exploit the tragedy to push for legislation that would disarm law-abiding citizens and do nothing to curb violence. In yet another dramatic monologue, Jimmy Kimmel shamelessly and falsely claimed that this sort of violence doesn’t happen in places where there are “real, sensible gun laws.”

“Once again our leaders are sending their thoughts and prayers,” Kimmel said of Friday’s shooting at Santa Fe High School in Texas that claimed the lives of eight students and two teachers. “President Trump said that he is with the people of Santa Fe in this tragic moment and that he will be with them forever, except when it’s time to do something and then he will not be with them, and neither will any of the congresspeople or governors that won’t ever do anything because they’re fearful it will hurt them politically. They know the truth, they know this has gone too far.”

Kimmel called lawmakers “too cowardly” to enact gun control because “they care more about the support of the [National Rifle Association] than they do about children.”

Missing the point—and apparently lots of facts—Kimmel attempted to assert that gun control could’ve stopped this tragedy in Texas. However, unlike the other high-profile shootings, the shooter in Texas used guns that are not even the target of most gun grabbers.

“So they sit there with their hands in their pockets, pockets that are full of gun money, and they do nothing. They just wait for the outrage to pass because it didn’t happen to their children,” said Kimmel. “The least you can do is register to vote, right now. Make sure we vote for politicians who will do something.”

“These kind of things don’t happen in countries with real, sensible gun laws,” he said as he wrapped up the monologue. However, he is wrong.

Just last month, Canada had its worst mass killing in decades, and their laws go far beyond what’s considered “sensible.”

In Canada there is no legal right to possess guns. Canadian civilians aren’t allowed to possess automatic weapons, handguns with a barrel shorter than 10.5 cm or any modified handgun, rifle or shotgun. Most semi-automatic assault weapons are also banned. But that didn’t stop Alek Minassian, 25, from killing 10 people and injuring 15 others.

Minassian’s desire to take lives was so strong that he didn’t need a gun to murder. He simply rented a Ryder van and went to it. Consequently, the Waffle House shooter who murdered four people days prior to Minassian—who had the notoriously loathed AR-15 rifle—didn’t kill half as many people as Minassian who had no gun at all.

People sufficiently enraged to commit such crimes may also be motivated to find other ways, criminologist James Alan Fox of Northeastern University points out.

Indeed, as other countries with strict guns laws illustrate, this happens all the time. It just so happens that according to a study by the Crime Prevention and Research Center — which was attacked by Snopes, who failed to prove it wrong — from the years 2009 to 2015, the US failed to enter the top ten list for the most mass shootings. However, Norway, who has extremely strict gun laws, became number one.

In 2011, Anders Brevik filled out all the forms necessary to navigate the extremely strict gun laws in Norway. He obtained a semi-automatic rifle under the pretense of hunting deer. He also obtained a handgun by proving that he was in a shooting club. He then went on a killing spree at a youth summer camp that laid waste to 77 men, women, and children.

But what about states that have banned guns entirely, like China? They don’t have school shootings, right? The certainly do not as their citizens have no guns—which leave them defenseless against the violent attacks on their schools carried out without guns—that happen all too often.

Just last month, as Scott Morefield points out for Townhall.com,

a man with the surname Zhao attacked a middle school in central China, killing nine children and wounding 10 more… with a knife. “The attack revived fears in China about school safety, a perennial concern among parents,” wrotethe New York Times. “Knives are a weapon of choice in China, where guns and other weapons are strictly regulated.” The Times then unironically quoted a Weibo user who unironically wrote, “I thought campuses were safe without guns.”

In fact, guns have little to do with parental concern about school safety in China these days. As the Times notes, a “spate of stabbings prompted the government to tighten security at schools, installing gates and cameras and training security guards to fend off attackers” in 2010. The attacks included a landlord who hacked seven kindergartners and their teacher to death with a meat cleaver and another who killed eight children with a knife.

But even hardening the schools hasn’t entirely prevented the attacks, though they have undoubtedly helped. In December 2012, a villager named Min Yongjun attacked Chenpeng Village Primary School, non-fatally stabbing an elderly woman and 23 children. In September 2011, a mentally ill farmer killed three adults and a young girl on their way to nursery school with an axe. And just last year a man killed seven and injured 65 with a bomb set outside an eastern China kindergarten.

The solution to preventing mass killings lies not in banning the tools used to carry them out. It has to do with studying why people want to do harm in the first place. As the cases above illustrate, people do not need guns to murder others, and banning them does nothing to prevent these attacks.

Until we stop focusing on the tools used in these attacks, and look for the causes, the people to suffer the most from these attacks on our freedom will be the law-abiding Americans who turn in their guns when they are told to do so.