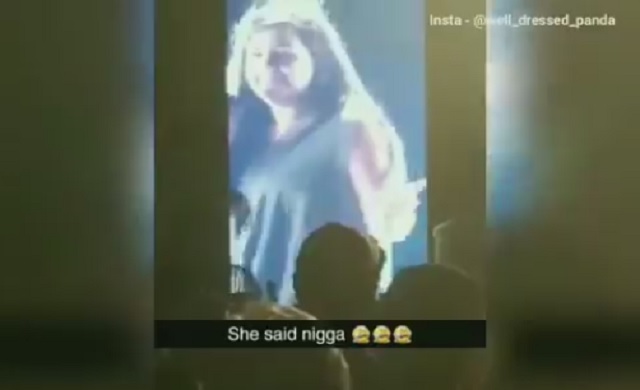 At a concert on Sunday, rapper Kendrick Lamar called a white female fan on stage to sing along with him to a song which makes gratuitous use of the word “nigga” over a dozen times.

After the woman sang the song as written and performed by Lamar himself, he stopped the concert to chastise her and humiliate her in front of the entire crowd before eventually kicking her off stage.

The woman was among the lucky fans who knew all the words to Lamar’s 2012 track “M.A.A.D City” and were invited to come up on stage and rap with during the final day of the Hangout Festival in Gulf Shores, Alabama, Billboard reported.

“So he starts the track and she gets to the first N-word of the song and she doesn’t say it, so I breathe a sigh of relief,” wrote one festival-goer who apparently witnessed the incident. “But then she gets to the next one and she belts that s— out like it’s her own name.”

“It has never felt more gratifying to boo someone than when we collectively booed [the woman] off the stage,” the Twitter user added.

Some in the crowd could be heard calling the fan expletive names.

The vitriol of the crowd is truly something to behold.

I'm sorry but this is Kendrick's fault. How you gonna bring a white person up to sing a song that uses the N word heavily. How many bleeps she suppose to do. I would have thought u was implying that it was ok 2 say it because the song u chose for the fan too rap was N word heavy.

Paul Joseph Watson accurately summed up the event on Twitter:

Rapper publicly shames woman in front of huge audience for merely singing the words to his song, is then applauded for it by an army of morons. https://t.co/BrqN7Lppr5