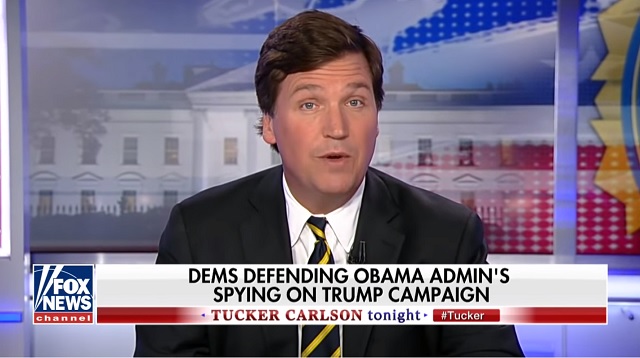 Monday during his show’s opening monologue, Fox News Channel’s Tucker Carlson said the “real lesson” from the ongoing Russia investigation was that the ruling class was “completely out of control.”

The “Tucker Carlson Tonight” host criticized the media for framing revelations that the Obama administration used an informant to spy on Trump’s campaign as doing so for Trump’s own good, as was done by The Washington Post and The New York Times.

“The people who wrote this crap should be ashamed,” Carlson said. “It’s not journalism. It’s partisan cheerleading. It’s also embarrassing credulous. Just transcribe whatever spin you got from your FBI source and call it a news story. How would these idiot reporters feel if the Trump administration read their emails or tapped their cell phones or sent a spy to spy on them and then claimed it was all for their own good? Obviously, they would be outraged, and so would we because we are not hacks.”

“Obama’s CIA director John Brennan, by contrast, is a hack,” he added. “He’s also a liar who has done more to embarrass and discredit the so-called intelligence community than any other single person. Brennan has been on Twitter attacking Trump and anyone else who wants to know more the about the Obama administration’s spying efforts in the last campaign, as if Americans don’t have a right to know when the government was spying on them and why. Our ruling class is completely out of control, that the real lesson of this Russian nonsense.”

Tucker went on to make a fool out of Democratic Rep. Eric Swalwell who said his evidence of “Russian collusion” was Trump’s team acting guilty: