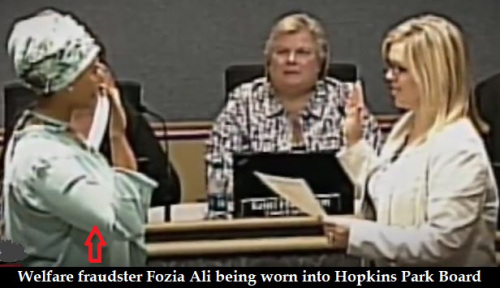 KMSP Fox9 in Minneapolis, Minnesota has undertaken something the national MSM no longer seem to do — bold, investigative journalism.

For five months, Fox9 investigated rampant welfare fraud by the Somali “refugee” and immigrant community in Minnesota, which cost the state’s taxpayers a whopping $100 million a year. Even worse, the $millions defrauded were then transferred to Muslim terrorists in Somali and other countries in the Middle East.

Through the Refugee Act of 1980, sponsored by the late Sen. Ted Kennedy (D) and former Sen. Joe Biden (D), the federal government has been aggressively “resettling” refugees from the east African country of Somalia into the United States, especially Minnesota. As of 2017, the state has an estimated 57,000 Somalis, the largest population of Somalis outside of East Africa.

Jeff Baillon reports on May 13, 2018 that Fox9 investigators used (1) public records; and (2) nearly a dozen government sources with direct knowledge of what is happening. These sources have a deep fear, and there is evidence to support their concerns, that some of the defrauded welfare money is ending up in the hands of terrorists.

The story began on the morning of March 15, 2018 when Fox9 chased a tip about a man who was leaving the country from Minneapolis-St. Paul International Airport (MSP) with a carry-on bag packed with $1 million in cash. Fox9 discovered that mysterious suitcases filled with cash have become a common, almost weekly carry-on at the airport. The money is usually headed to the Middle East, Dubai and points beyond. Last year alone, more than $100 million in cash left MSP in carry-on luggage. Travelers can do that, as long as they fill out the proper government forms.

Glen Kerns, a former Seattle police detective who’d spent 15 years on the FBI’s joint terrorism task force, said: “What we were interested in is where it [the suitcases of money] was going. It’s an outright crime, it’s unbelievable.”

Kerns tracked millions of dollars in cash leaving on flights from Seattle. The money came from Hawalas — businesses used by some immigrant communities in the United States to courier money to their relatives in countries with no official banking system. Kerns discovered some of the money was being funneled to a Hawala in the region of Somalia that is controlled by the al Shabaab terrorist group:

“I talked to a couple of sources who had lived in that region and I said, ‘If money is going to this Hawala do you think it is going to al Shabaab?’ And he said, ‘Oh definitely, that area is controlled by al Shabaab, and they control the Hawala there.’”

Kerns’ source said that when the money arrives, whether it was intended for legitimate purposes or not, al Shabaab or other groups demand a cut.

As Kerns dug deeper, he found that some of the individuals who were sending out tens of thousands of dollars’ worth of remittance payments were on government assistance: “We had sources that told us, ‘It’s welfare fraud, it’s all about the daycare.’”

Five years ago, Fox9 was the first to report that daycare fraud was on the rise in Minnesota and that some businesses were gaming the system to steal millions in government subsidies meant to help low-income families with their childcare expenses. As Hennepin County Attorney Mike Freeman sarcastically put it, “It’s a great way to make some money.”

This is how the daycare-fraud scheme works:

An example is Fozia Ali, the owner of a daycare center in south Minneapolis and a member of the city of Hopkins Park Board. As she was taking her oath of office to “support the constitution of the United States, so help me God,” Ali was under investigation for wire fraud and theft of public money. Her daycare center was raided by state and federal agents, suspected of billing the government for more than a million dollars’ worth of bogus childcare services.

Craig Lisher from the FBI said: “We found records that she was collecting a significant amount of money for a much larger number of children than were actually attending the center. We are aware that some of the funds went overseas, what she was cashing out, money from the business.”

Investigators analyzed Ali’s cell phone to track her activities, and found that she had taken a two-month trip from Minnesota to Dubai and then Kenya, staying at times in $800 a night hotel rooms. She used an app on her phone to bill the state of Minnesota for childcare services while she was out of the country.

Ali pled guilty to the daycare fraud and in March began serving time in a federal prison.

Acting Commissioner for the Department of Human Services Chuck Johnson said his agency has 10 daycares currently under active investigation for fraud. Search warrants obtained by the Fox 9 Investigators show each one of the suspect centers has received several million dollars in childcare assistance funds; most are owned by Somali immigrants. Fox 9 has learned dozens more daycare centers are considered suspicious.

Sources in the Somali community told Fox 9 it is an open secret that starting a daycare center is a license to make money. The fraud is so widespread they said, that people buy shares of daycare businesses to get a cut of the huge public subsidies that are pouring in. Government insiders believe this scam is costing the state at least a hundred million dollars a year, half of all child care subsidies.

In 2014, Minnesota began aggressively going after daycare fraud. The government discovered that within hours after the money showed up in a daycare center’s bank account, funds were wired to the United Arab Emirates. Those wire transfers stopped after a few centers were busted, which led to a change in the fraudsters’ tactics to using those mysterious suitcases filled with cash at Minneapolis-St. Paul International. Investigators documented the carry-on cash increasing from $14 million in 2015, to $84 million in 2016, to $100 million in 2017 — at least some of which is going towards terrorism.