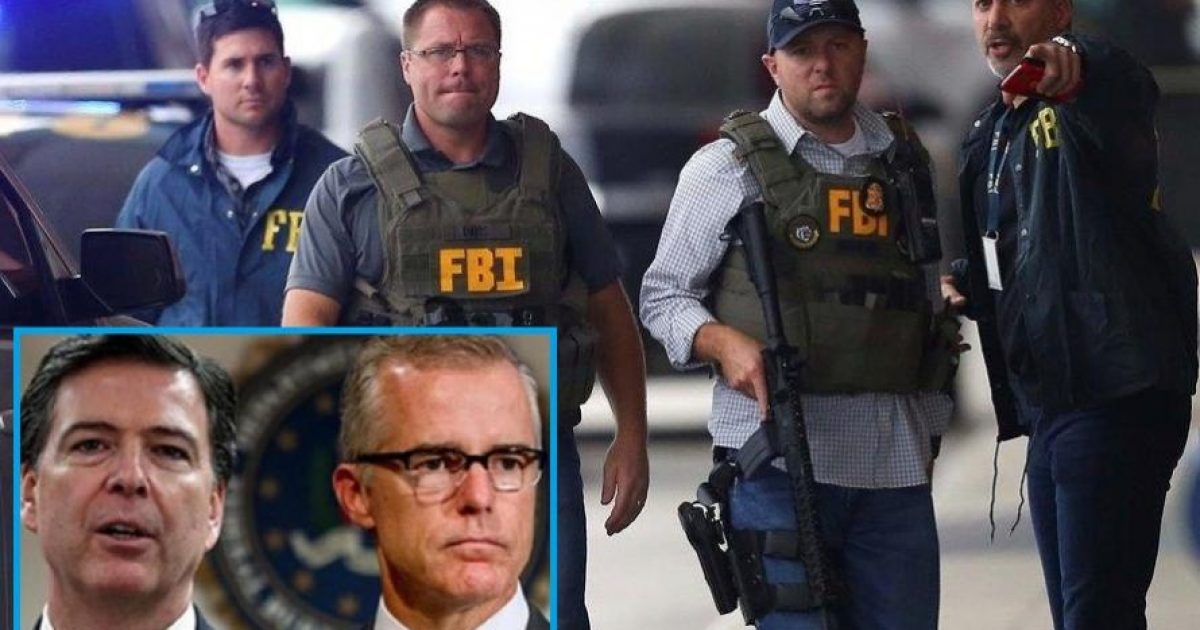 It looks like the dam is beginning to crack at the Federal Bureau of Investigation as rank and file FBI agents are now ready to testify as they claim they are “sickened by former FBI Director James Comey and former Deputy Director Andrew McCabe.

“There are agents all over this country who love the bureau and are sickened by [James] Comey’s behavior and [Andrew] McCabe and [Eric] Holder and [Loretta] Lynch and the thugs like [John] Brennan–who despise the fact that the bureau was used as a tool of political intelligence by the Obama administration thugs,” former federal prosecutor Joe DiGenova told The Daily Caller on Tuesday. “They are just waiting for a chance to come forward and testify.”

DiGenova and his wife, Victoria Toensing, have represented government whistleblowers in the past.

Ahead of the release of the Department of Justice (DOJ) inspector general report on how the FBI handled the Clinton email investigation, TheDC spoke with DiGenova, a former Trump official who maintained contact with rank and file FBI agents and a counter-intelligence consultant who conducted an interview with an active special agent of the FBI’s Washington Field Office (WFO).

TheDC independently confirmed the veracity of the consultant’s position and access, and reviewed detailed transcripts of his Q&A with the special agent, who requested the arrangement due to internal dragnets and fear of vicious retribution.

These agents prefer to be subpoenaed to becoming an official government whistleblower, since they fear political and professional backlash, the former Trump administration official explained to TheDC.

Mr. DiGenova also said, “It’s an intelligent approach to the situation given the vindictive nature of the bureau under Comey and McCabe. I have no idea how to read Chris Wray, who is not a leader and who has disappeared from the public eye during this entire crisis. You know, he may be cleaning house but if he’s doing so, he’s doing it very quietly.”

“I don’t blame them. I don’t blame the agents one bit,” he added.  “I think that the FBI is in a freefall. James Comey has destroyed the institution he claims to love. And it is beyond a doubt that it is going to take a decade to restore public confidence because of Comey and Clapper and Brennan and Obama and Lynch.”

“Activity that Congress is investigating is being stonewalled by leadership and rank-and-file FBI employees in the periphery are just doing their jobs,” the special agent continued.  “All Congress needs to do is subpoena involved personnel and they will tell you what they know. These are honest people. Leadership cannot stop anyone from responding to a subpoena. Those subpoenaed also get legal counsel provided by the government to represent them.”

So, when will those subpoenas be issued?  Who knows.

“They know that it wasn’t just Comey and McCabe in this case,” said a Trump administration official, according to the DC.  “That’s too narrow a net to cast over these guys. There’s a much broader corruption that seeped into the seventh floor at the bureau.”

“They ruined the credibility of the bureau and the technical ability of the bureau, so systemically, over the past several years, they’re worried about their organizational reputation and their professional careers,” the official reportedly said.

As more and more information comes out, it looks like we are not just looking at a corrupt Hillary Clinton campaign and a Barack Hussein Obama Soetoro Sobarkah administration, but a very corrupt FBI and DOJ under Obama, as well.

Frankly, America is long overdue to have its house cleaned.  Let’s get these agents in front of Congress to blow the whistle on the corruption.