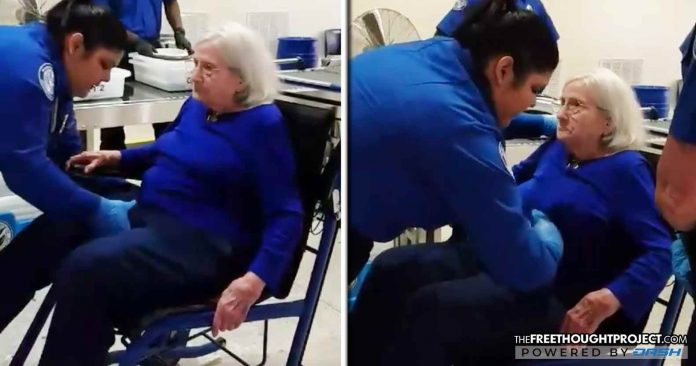 Dulles, VA — Jeanne Clarkson was travelling through Washington-Dulles Airport last week with her 96-year-old mother when she witnessed TSA in all their police state glory molest her mom. To “keep us safe,” as the nearly 100-year-old World War II veteran passed through security, she was subjected to a most disgusting and invasive molestation process. Clarkson caught the depravity, which lasted nearly six-minutes, all on video.

The TSA – whose job is supposedly “fighting terrorism” – is, without doubt, one of America’s most corrupt and incompetent agencies. However, last year, they apparently became so unsatisfied with the mere ability to strip search babies, remove colostomy bags, beat up blind cancer patients, and fondle your genitalia, that they announced a more invasive physical pat-downs. The pat-downs, which TSA warned would probably prompt assault complaints with the police department because of their invasive nature, have been implemented and a 96-year-old WWII veteran has become their latest victim.

The TSA, who has never stopped a terror attack and is unable to stop 95 percent of the tests against its tactics, gropes and molests children and adults alike — who unquestioningly accept it. Americans are being conditioned for a police state and they have no idea.

The comments on Clarkson’s video illustrate how much Americans accept and even defend this insanity. Clarkson has been ridiculed, threatened, and harassed by people who tell her that having her mother’s crotch repeatedly groped by blue gloves is what keeps us safe.

“I’m just tired of people not looking at the bigger picture. Her mother was screened, big whoop! Like I said I get full on screening every time I fly. They are just doing their job and I thank them,” one Facebook user wrote, inadvertently pointing out a massive problem.

“Just doing their job,” is no excuse to act in an immoral manner. Remember, when a police officer kidnaps and cages a mom who is trying to save her daughter’s life using CBD oil to treat her seizures, and she gets placed in a foster home and murdered—they are just doing their job.

The NSA, who listens to the phone calls of millions of innocent Americans, spies on us constantly, building up a massive and brutal police state in the process, are all just doing their job.

Indeed, the most horrifying and murderous acts carried out in the last century have all been done so by people just doing their jobs.

Despite being utterly incompetent, the jobs of the TSA are becoming increasingly tyrannical, in spite of their ineffective and often criminal tendencies. As the Free Thought Project has pointed out countless times, the TSA has been caught in a myriad of criminal activity — including everything from massive drug trafficking conspiracies to brutal beat downs. But please, tell me more how feeling up a 96-year-old grandma keeps us safe.

Clarkson says that after taking the video below, she filed a complaint with officials in the airport. However, the results of that complaint have yet to be publicized.

After watching the footage below, we now know why the TSA is putting together a watchlist of those who criticize them. Once they snub out the last few people who value freedom, Americans more concerned with an ineffective facade of safety instead of individual liberty will be lining up to have their genitals fondled and groped so they can feel secure.

Sadly, this is the second such case in a very short time in which TFTP has reported on elderly women getting felt up by the TSA.

Eva Mozes Kor exposed her abuse by TSA in a Tweet in March, explaining how she was forced to undergo a “very demeaning body search” just to board a plane. In her Tweet, she drew a parallel with the TSA and Auschwitz.

Kor was traveling back home after giving a lecture on the horrors of Auschwitz when she said she was able to survive being in a concentration camp but could barely survive the abuse she suffered at the hands of TSA.

“Another very demeaning body search by the TSA – there has to be some way that at age 84 I can get some clearance by the POWERS of Government from this procedure. As I lecture about surviving Auschwitz I barely survive the TSA body search I detest it. That ruined my experience,” wrote the 84-year-old.

Another very demeaning body search by the TSA – there has to be some way that at age 84 I can get some clearance by the POWERS of Government from this procedure. As I lecture about surviving Auschwitz I barely survive the TSA body search I detest it. That ruined my experience

When the very people who lived during the time of Hitler’s regime—including those who fought against it and survived in it—are telling us about how the United States is heading down this dark path, it may be time to start listening to their warnings.