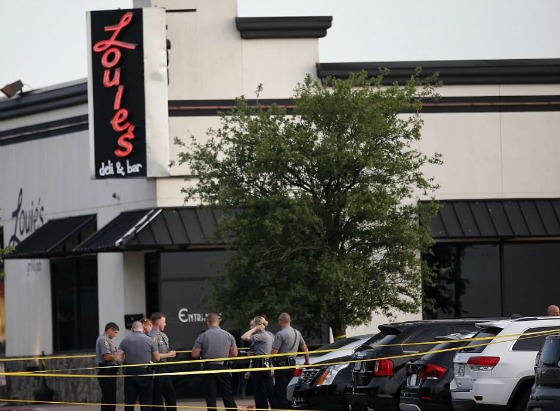 A man armed with a pistol walked into an Oklahoma City restaurant Thursday night and opened fire.

Two customers were wounded before the suspect was shot dead by two armed citizens in the parking lot.

Police are still investigating the incident, but so far they are not sure what prompted the shooting, which occurred around 6:30 p.m. Thursday at Louie’s On The Lake, on Lake Hefner.

The shooting victims are recovering from their injuries, reports KOCO News 5:

Syniah Giles, 12, was shot in the tailbone and the bullet went to her stomach. She underwent surgery Thursday night at OU Medical Center and is being taken to Children’s Hospital. She is said to be in fair condition Friday morning.

Syniah will remain in the hospital for five to seven days and officials said her recovery will take months.

Her mother, 39-year-old Natalie Giles, was grazed by a bullet and has been released from the hospital.

Two other people were injured during the incident. A man suffered a broken arm while trying to escape the shooting and police say a fourth victim suffered a minor injury, but it wasn’t clear how the injury occurred.

Syniah is a student at Mustang Middle School, her father Jabari Giles told KOCO 5. Officials with the school district posted on its official Facebook page Friday morning, “Keep our precious families in your thoughts today as one of our own is recovering from serious injuries after the incident at Louie’s last night and her friend is recovering as well.”

The father told KOCO 5 that he wanted to say “thank you” to the armed citizen who shot the shooter.

“Thank you,” said Giles. “I think he saved some lives tonight. I think it could have been a lot worse.”

Reactions to the shooting are flooding social media, and naturally, gun control advocates are ignoring the fact that two armed heroes stopped the shooter from harming more people.

But thankfully, there are voices of reason out there.

Kaitlin Bennett, the Kent State University graduate who recently posed in front of the college with an AR-10 while holding her graduation cap adorned with “come and take it,” posted the following Tweet last night:

If you didn't hear, a shooting in an Oklahoma restaurant was just stopped by an armed citizen. Three were injured, but the only one that died was the suspect. You probably won't hear @davidhogg111 and the gun control lobby tell you about this since it doesn't fit their narrative.

Won't hear about Lake Hefner Oklahoma restaurant shooting anywhere on the news since the shooter was taken out by a good samaritan with a gun. Prepare for the silence

Hey @davidhogg111, pull your pacifier out of your mouth and let’s hear your big speech about the armed citizen that stopped the Oklahoma restaurant shooting. #GoodGuyWithAGun

There was a shooting at a restaurant in OKC that I go to all the time.

Wanna know how it was handled?

AN ARMED CITIZEN SHOT BACK 👏🏼

One of the many reasons why I love Oklahoma.

Mass shooting in Oklahoma City this evening that you're not hearing about because an armed citizen neutralized the threat.

Shooting stopped in Oklahoma by an armed citizen. Three injured and one shooter killed. I wonder if @davidhogg111 or @Emma4Change has anything to say about that.

For those who doubt that armed citizens can and do stop crime – often – please check out the website Crime Prevention Research Center.

Twitter user The Pholosopher posts links to defensive gun use stories every day on her account using the hashtags #dgu and #gunssavelives. As of today, she’s up to #77, and as of the time of this writing, she has yet to post about the Oklahoma shooting…which will likely appear as #78.