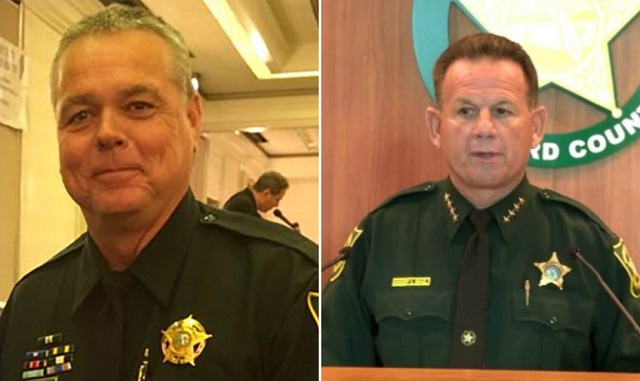 Disgraced officer Scot Peterson allegedly “covered up” a “simulated rape” on a schoolboy involving a baseball bat and Sheriff Israel’s son, according to a new report.

[A] report that recently surfaced has some victims’ families calling for a renewed investigation of Peterson for a case he handled four years to the day prior to the massacre. The case involved two 17-year-old students bullying a 14-year-old freshman, with one holding down the younger boy by his ankles while the other kicked the victim, grabbed his genitals and then took the victim’s own baseball bat and began shoving it against his buttocks, simulating rape, through the boy’s clothes.

One of those assailants, the boy who allegedly held down the victim, was Israel’s son, Brett. Defense attorney Alex Arreaza, who represents shooting victim Anthony Borges, who was shot five times in the Valentine’s Day massacre but survived, said the case could have led to felony charges.

“He could be charged with a lewd and lascivious, and I’m being conservative,” Arreaza said.

Peterson claims in the report that it was a “simple battery” under the board’s discipline matrix, and he decided to give both of the boy’s attackers a three-day suspension.

“What is that? Is that like an alternative universe law?” Arreaza said. “What happens? Because you’re in the school you don’t have to obey regular laws?”

In fact, the disciplinary matrix includes “sexual misconduct” and “serious” battery, both of which, arguably, apply in this case.

“You will never see somebody grabbing somebody’s crotch and poking some kid in the butt with a bat and getting a simple battery for it,” Arreaza said when asked if he believed the sheriff’s son received preferential treatment.

Andrew Pollack, whose daughter Meadow died in the shooting, said the incident may have been brushed under the rug in accordance with the PROMISE program.

As I reported earlier this month, the purpose of the PROMISE program was to “fight systemic racism” by keeping minority students from getting criminal records. The Parkland shooter’s lack of a criminal record allowed him to buy a gun.