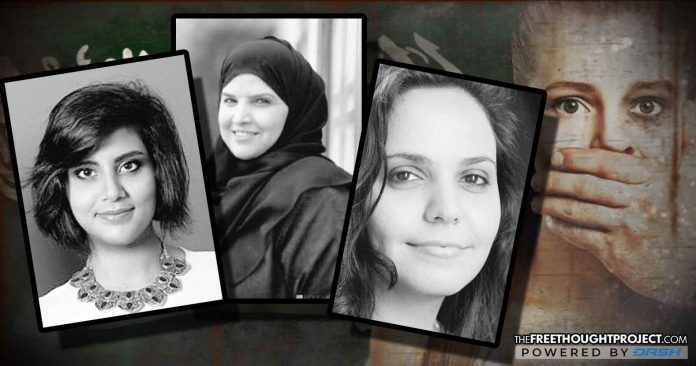 When Saudi Arabia announced last year that 2018 would be the year women were finally allowed to drive, the United States treated its close ally as if it was setting the standard for women’s rights. However, now that several of the women who were at the forefront of the movement have been mysteriously arrested before the new law goes into effect, the U.S. has refused to call out the Saudi government.

While the ban on women driving is set to be lifted next month, a report from Reuters revealed that seven activists who supported the legal changes that are set to take place were mysteriously arrested by the Saudi government last week.

3 Saudi women who took part in the #IamMyOwnGuardian movement against the oppressive male guardianship system in Saudi Arabia, were arrested after regime accountants infiltrated them in order to accuse them of "treason." Follow @OsloFF speaker @manal_alsharif for developments. pic.twitter.com/2gqsL6NBoJ

Saudi Arabia has a history of arresting and charging individuals who have been accused of criticizing or protesting the government—even when little evidence exists to support the claims—and the kingdom released a statement claiming that the seven individuals “had suspicious contacts with foreign entities to support their activities, recruited people working in sensitive government sites and offered financial support of hostile elements overseas.”

Saudi women’s rights activist and author, Manal al-Sharif, said three of the women who were arrested are her close friends, and she noted that all seven Saudi activists were “detained in their homes without a warrant or an explanation.”

“On June 24, the ban on women driving in Saudi Arabia will finally be lifted. And yet, the arrests do not augur well for the so-called progressive changes in the country,” al-Sharif said. “Understandably, I was in a state of disbelief about these developments. I contacted the women’s families to confirm the news before I tweeted about it. But the families I spoke to have been left in complete darkness about why the activists were detained on the first day of the holy month of Ramadan, a month of forgiveness and mercy.”

A report from the Associated Press noted that the activists who were targeted in the recent crackdown have been vocal for several years about securing basic rights for women in Saudi Arabia:

“Among those detained since Tuesday is Loujain al-Hathloul, who was arrested in late 2014 and held for more than 70 days for criticizing the government online and pushing for the right to drive. Others arrested include Eman al-Nafjan and Aziza al-Yousef, two of the most well-known women’s rights activists in the kingdom who for years had campaigned for the right to drive and were involved in human rights issues in the kingdom. Al-Nafjan and al-Yousef have both taught at state-run universities and are mothers, with al-Yousef also a grandmother. The three women had also called for an end to other less visible forms of discrimination in Saudi Arabia, such as guardianship laws that give male relatives final say on whether a woman can travel abroad, obtain a passport or marry.”

Al-Sharif called to the government’s response to the arrests as “vague and alarming, much like the arrests themselves,” and noted that the mysterious charges against the activists have created fear for many women like herself who have been vocal in their opposition of the kingdom’s strict male guardianship laws, which ban women from making major decisions without the consent of a husband or male relative.

While the Saudi government has attempted to claim that the activists were “forming a cell” that posed a threat to state security, Amnesty International criticized the lack of transparency surrounding the sudden arrests.

Although Saudi Arabia seemed to be making progress with the announcement that it would finally allow women to drive cars, it appears that the news was mainly meant for political purposes to create positive PR for the country, as it is still persecuting activists who dare to question the government.

Unfortunately, this treatment is not uncommon. As The Free Thought Project has reported, last year Munir Al Adam, a 23-year-old deaf and blind man, was sentenced to death after he was convicted of peacefully protesting during a wave of anti-government protests in 2012. While he initially confessed to the accusations, human rights advocates insisted that he was tortured, his disabilities were ignored, and his conviction was based solely on the confession he made under duress.

Another man sentenced to execution was Mujtaba al-Sweikat, who was also charged with protesting in 2012 when he was 17 years old. He was arrested as he was boarding a plane to fly to the U.S. to attend Western Michigan University.

“This is the third wave of arrests after the new crown prince, Mohammed bin Salman, came to power last June. The first wave occurred last September, when more than 80 clerics, social media influencers, and university professors were jailed for undeclared reasons. Officials have declined to say much about the arrests, noting only that “it’s to protect the privacy of those imprisoned.” The second wave of arrests followed in November when hundreds of businessmen and officials were detained in a supposed push against corruption. The arrests are a complete turnaround from the recent fresh and uplifting changes that Saudi Arabia has experienced, especially the restrictions imposed on the religious police and the improvement in the status of women.”

The United States refused to call out its close ally, and U.S. State Department spokeswoman Heather Nauert summarized the ordeal by simply saying, “We support space for civil society and also free speech. But overall, we’re concerned about it and we’re keeping a close eye on it.”

The United States’ response is ironic, given the fact that if another country in the Middle East that was not considered a close ally—such as Syria or Iran—was arresting activists for supporting basic women’s rights, the U.S. would be calling for a full-scale invasion to bring that country the “freedom and democracy” it clearly needed, and to overthrow the dictator who was oppressing his people.

However, because Saudi Arabia is a friend of the United States—and it is partnered in the “single largest arms deal in U.S. history,” which guarantees the kingdom $350 billion in weapons over the next 10 years—the U.S. has apparently chosen to turn a blind eye to egregious human rights violations committed by the Saudi government.