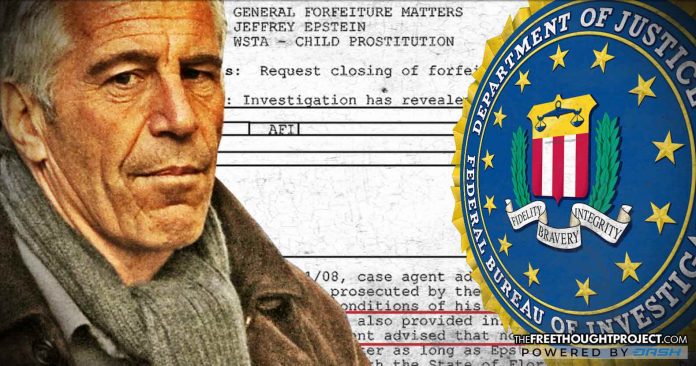 In a strange and unexplained move, the Federal Bureau of Investigation announced on Thursday that it released a trove of documents from an investigation into billionaire hedge fund manager and convicted pedophile Jeffrey Epstein, and one of the most notable revelations is that he appears to have worked as an FBI informant, in exchange for a lenient sentence.

After multiple underage girls in Florida reported that they were being paid by a mystery man to have sex with middle-aged men, and all roads led back to Epstein’s mansion, the FBI launched an investigation in 2006. A report from The Guardian noted that federal prosecutors “identified 40 young women who may have been illegally procured by Epstein,” which easily should have resulted in Epstein spending years in prison if as many as half of the women testified against him.

It should have been a textbook case that would have made the FBI look heroic for putting a serial pedophile behind bars. However, the opposite happened. Epstein agreed to a plea deal for one minor charge in 2008, and he ended up spending just 13 months in prison, out of the 18-month sentence he was given for “soliciting prostitution and procuring a minor for prostitution.”

In addition to the ridiculously light sentence, the Palm Beach Post reported that in exchange for the year Epstein spent in prison, “federal prosecutors agreed not to pursue allegations that he had abused dozens of other teenage girls, instead of allowing them to file civil lawsuits against Epstein.”

The “sweetheart deal” given to Epstein has angered many Americans, especially those who have been sentenced to years in prison for nonviolent crimes. While there has been speculation as to whether Epstein’s wealthy financial status kept him out of prison, the latest release of documents from the FBI indicates that Epstein’s plea deal included more than just money.

The FBI released nearly 300 pages of documents in eight parts on Thursday. Although the majority of the content was made up of clippings from newspaper articles about Epstein, lists of the pages that had been deleted, and large blank spaces where information was being redacted, there was one document that stood out. Page 21 of Part 6 stated:

The sentence claiming that “Epstein has also provided information to the FBI as agreed upon” indicates that the billionaire agreed to supply the FBI with some sort of “information,” in exchange for his plea deal.

What could Epstein have possibly provided information about? It is no secret that he was known for having wealthy and powerful friends. Former President Bill Clinton was among Epstein’s closest friends, and the flight logs from Epstein’s private jet revealed that Clinton was listed as a passenger on the jet at least 26 times between 2001 and 2003, which would have put Clinton on the plane at least once a month during the two-year period.

Epstein was also close friends with Prince Andrew, who was named in a lawsuit filed by a woman in 2014, claiming that when she was a teenager, she was kept on Epstein’s private island where she treated as a “sex slave” and forced to have sex with Prince Andrew.

President Donald Trump is another name on Epstein’s list of wealthy friends, and in 2002, he describedEpstein as a “terrific guy” who had been his friend for 15 years. “He’s a lot of fun to be with. It is even said that he likes beautiful women as much as I do, and many of them are on the younger side,” Trump said.

The federal prosecutor who was responsible for Epstein’s offensively light sentence was attorney Alexander Acosta. Instead of facing backlash, he was promoted, and last year he became the United States Secretary of Labor after he was nominated by Trump.

Whether the “information” Epstein provided to the FBI to get out of spending years in prison could have been about Clinton, Trump, Prince Andrew, or any of his other wealthy friends, the fact is that the FBI is confirming that has no problem setting a sexual predator free to continue to harm young girls, a decision that arguably hurts the public more than it helps. 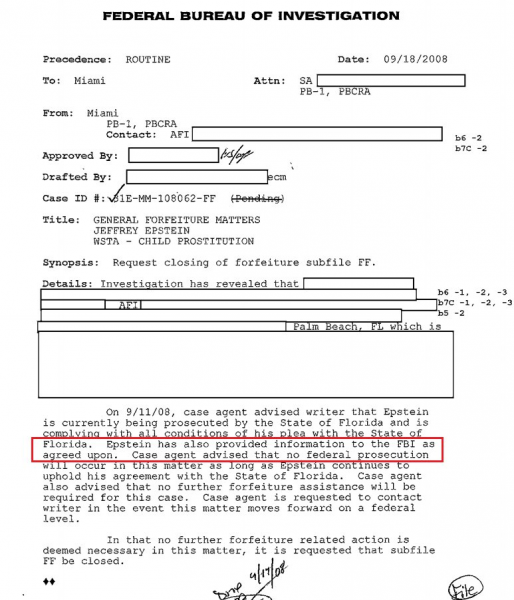