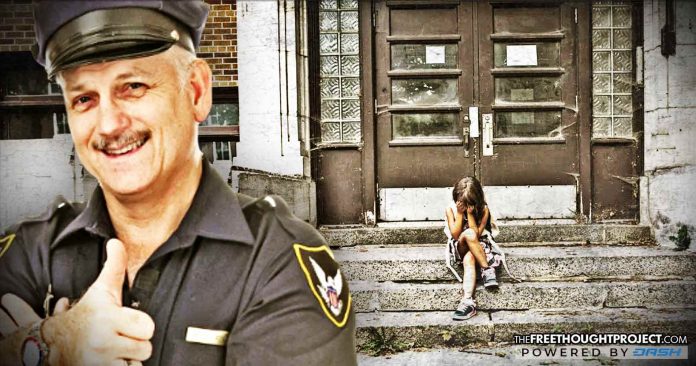 While teachers across the United States protest for higher wages and increased funding for public schools, police officers in one state are actively stealing millions of dollars in funds that were supposed to be used to for public education—and they are getting away with it.

Following criticism of the massive revenue police departments generate by stealing cash, property and other items from individuals—also known as civil asset forfeiture—the state of Missouri amended its Civil Asset Forfeiture Act in 2001 to force departments to “deposit the proceeds into the public education fund as required by the Missouri Constitution.”

At the time, police departments in Missouri had generated $32 million in seized property over the course of a decade. Matt LeMieux, the executive director of the ACLU of Eastern Missouri, said he hoped the legal change would stop the ongoing practice of “policing for profit.”

“In the end, this law will provide funding for education and protect citizens from having their property taken from them for improper reasons,” LeMieux said. “It is astounding that such a law was needed. The fact that seizure had to be defined in the law to make some police departments comply is disgraceful.”

However, 17 years after the loophole was closed legally, a report from the American Civil Liberties Union has revealed that only a small fraction of the proceeds from the property seized by Missouri Police have gone to public education—meaning that police are robbing the public of millions of dollars in property, and then robbing students and teachers by withholding the funds from their designated location.

The Missouri State Auditor reported that in 2016, law enforcement agencies seized $6.3 million worth of property from 615 seizures. While 44 percent of the funds were transferred to federal agencies, only $100,000 was sent to public education funds. This means that in addition to only sending a miniscule amount of money to benefit school children, police departments have kept millions of dollars in funds and they have not had to report on how it was spent.

The report from the ACLU explained the massive discrepancy by noting that, “Missouri law enforcement has conspired with the Department of Justice, in defiance of state law, to ensure that the cash goes into their coffers rather than to the school children of Missouri.”

While Missouri is one of the few states in the country that has passed strict laws meant to ban police departments from profiting from civil asset forfeiture, that law is not being enforced. The Institute for Justice noted that departments in the state are bypassing the law by using an “equitable sharing” program where state and local agencies can “partner with a federal agency and litigate to forfeit the property federally. If they prevail, police and prosecutors can collect up to 80 percent of the proceeds, even if that circumvents Missouri law.”

Not only are law enforcement agencies not following the regulations and laws put in place by the state of Missouri, but the amount of funds generated from civil asset forfeiture has skyrocketed in recent years. While $32 million in property was seized from 1990-2001, more than $19 million in property was seized, just in the last three years. An investigation by KMBC News revealed that only $340,000, or less than 2 percent of the funds, were sent to public schools.

All the while, teachers at public schools in Missouri are among thousands from across the United States who are begging for higher salaries and increased funding. Yet they are not publicly calling out the police departments who are robbing their schools of millions of dollars in funding.

Lawmakers in Missouri have tried to address the crisis by introducing new legislation in an attempt to force police departments the follow the laws that were put in place nearly two decades ago. The latest example of this is Missouri House Bill 2507, which seeks to “Prohibit law enforcement agencies from transferring seized property to a federal agency in forfeiture litigation except if the seized property is $50,000 or more in currency.”

However, given the blatant disregard for the current laws that has been shown by police departments in Missouri who are willing to seize exorbitant amounts of property from citizens, and then withhold the proceeds from public schools, it raises questions about whether new laws will do anything to stop the ongoing corruption.