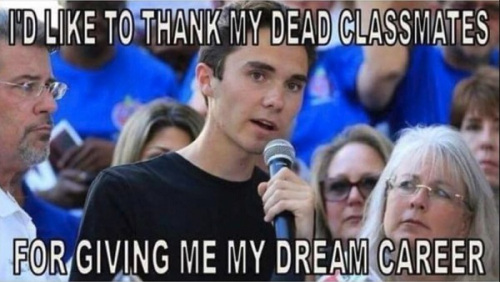 The dictionary defines “extort” as “to get something, especially money, from someone by using force or threats”.

And that’s exactly what David Hogg, self-appointed spokesman for gun-control for not just the students of Parkland, Florida’s Marjory Stoneman Douglas High School, but also students across the United States.

Two days, ago, on May 23, 2018, Hogg joined the call for a National Die-in Dayon June 12 in Washington, DC, to advocate gun control in honor of “the 49 victims of Pulse as well as hundreds of countless lives lost to gun violence in this country each year.”

But Hogg means to do better than the National Die-in. On the same day, he tweeted a call for disruptive “die-in” “lie down” demonstrations inside Parkland’s two Publix grocery stores:

.@Publix is a #NRASellOut
In Parkland we will have a die in the Friday (the 25th) before memorial day weekend. Starting at 4pm for 12 min inside our 2 Publix stores. Just go an lie down starting at 4. Feel free to die in with us at as many other @Publix as possible.

Publix, which is based in Lakeland, Florida, is the state’s largest private employer and one of the biggest grocery chains in the Southeast, with 1,172 stores in Alabama, Florida, Georgia, North Carolina, South Carolina and Tennessee. Roughly 800 of those locations are in Florida.

After calling for a “die-in” at Publix stores, on May 24, 2018, Hogg then tweetedthis extortion at Publix, demanding $1 million in donation and a pledge of ideological fealty to the gun-control movement:

“I call on @Publix to donate double the money they gave to Putman to the Stoneman Douglas Victims fund, $1,000,000. And never support an A rated NRA politician again.”

I call on @Publix to donate double the money they gave to Putman to the Stoneman Douglas Victims fund, $1,000,000. And never support an A rated NRA politician again.

Calling Hogg the “public face of the gun control movement,” Victor Morton of the Washington Times explains that Publix is being targeted by Hogg for its support of Adam Putnam, Florida’s agricultural commissioner and a Republican gubernatorial candidate. According to the Tampa Bay Times, Publix had given a total of $670,000 to Putnam’s campaigns in the last three years — thus, the sum of $1 million of Hogg’s extortion.

CBS News reports that amid Friday’s “die-in” at its stores, apologizing for putting “our associates and the customers they serve in the middle of a political debate,” Publix announced it has suspended all political contributions“as we reevaluate our giving processes”.