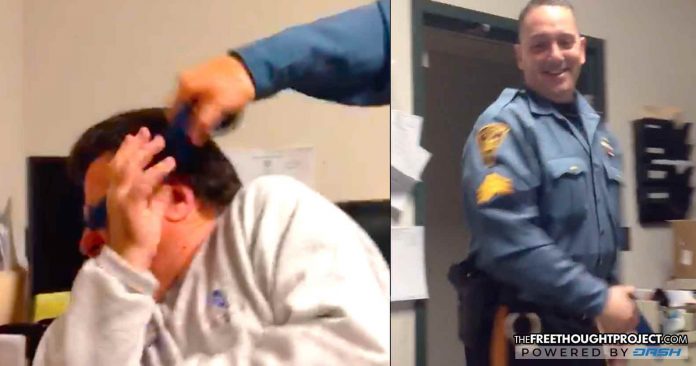 In one incident, Huber reportedly chased the local fire chief around police headquarters with “Big Blue.”

Ironically, Huber is in charge of the department’s internal affairs investigation unit, which is tasked with policing the behavior of the officers and punishing them when they get out of line. Huber’s actions show just how much of a farce the internal affairs unit was, and it is likely that this is not unique to the Mountainside Police Department.

“[Huber] while sitting on the toilet, would fling excrement soiled toilet paper,” plaintiff Christopher Feighner, states in the lawsuit.

Huber also worked with children as an officer for the school district and coached children’s sports teams.

If you think that it could not get any worse, Lt. Thomas Murphy is accused of raping multiple officers with a flashlight.

“Murphy had a practice of taking his flashlight and ramming it into the anus area of other male officers while at police headquarters,” the lawsuit states.

One plaintiff, James Urban, said that it hurt for him to sit down after an encounter with Murphy. It was also alleged that many officers would walk with their backs against the wall to avoid being victimized by the flashlight.

The lawsuit states that the chief of police was informed about many of these issues, but no action was taken. The allegations also include blatant racism on the part of multiple supervisors and dangerous activity like

In a statement posted on the borough’s website, officials announced that Murphy and Huber have been suspended.

“For my part, I can state without equivocation that I deny any suggestion I acted in any way improperly or failed to discharge my duties and functions as an elected Councilperson and as the Mountainside Councilperson who is the liaison to the Police Department,” Councilman and Police Commissioner Keith Turner said.

“The citizens of Mountainside know full well the quality and integrity of the people who have served them and the recklessly asserted characterizations in a lawsuit will not change that knowledge,” Turner added.

The lawsuit seeks an unspecified amount of compensation, citing the hostile work environment and retaliation provisions of the Law Against Discrimination.