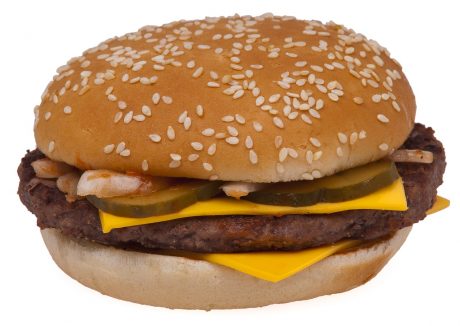 One of the fastest ways to ruin anything is to get lawyers involved, and lawyers are running amok in America today.  Several decades ago, Supreme Court Chief Justice Warren Burger warned that our nation would become “a society overrun by hordes of lawyers, hungry as locusts”, and that is precisely what has happened.  There are more than 1.3 million lawyers in the United States today, and it is estimated that those lawyers produce more than 40 million lawsuits each year.  Many of those lawsuits are completely frivolous, but frivolous lawsuits are often settled because it can be much cheaper to settle them than to defend against them in court.  So it is essentially a form of “legal extortion” that has gotten wildly out of control.

Two McDonald’s customers in Florida are suing the fast-food giant for a hefty sum of $5 million because they say they’re being unfairly charged for cheese they don’t want on their burgers.

Cynthia Kissner and Leonard Werner argue that hamburgers and cheeseburgers are different prices on the McDonald’s menu, but when they order a Quarter Pounder without the extra dairy, they’re still forced to pay the same amount.

In the end, this is something that nobody cares about, but some lawyers out there saw an opportunity to make a quick buck and so they are going for it.

Once upon a time you could order a Quarter Pounder without cheese right off of the menu.  But if you go into any McDonald’s today you have to specifically ask them to leave the cheese off if you don’t want cheese on your Quarter Pounder.

Apparently, some lawyers in Miami believe that McDonald’s is being “unjustly enriched” because the price is not reduced for those that would like the cheese left off their Quarter Pounders…

According to the lawsuit, filed by Andrew Lavin of the Miami-based Lavin Law Group, McDonald’s used to sell four items in the Quarter Pounder family, with and without cheese, with prices adjusted accordingly — about .30 to .90 cents more for cheese than without.

I can’t believe that someone should be stupid enough to bring such a lawsuit.  Andrew Lavin should be immediately disbarred for this.

Attorneys like Lavin are financial predators, and fortunately it doesn’t look like McDonald’s is inclined to settle…

“We do not believe the claims in this lawsuit have legal merit,” McDonald’s said in an email. “The advertised Quarter Pounder burger comes with cheese. We try to accommodate our customers’ requests by allowing them to customize their orders, such as a Quarter Pounder with no cheese.”

It is rapidly getting to the point where our entire society is becoming paralyzed by fear of lawsuits and legal matters.  Just look at the White House.  President Trump could have gotten so much else done if he wasn’t constantly fighting for his life against a legal witch hunt.  Robert Mueller has been given unlimited time, staff and resources to investigate the President, and it has been over a year and Mueller still hasn’t found anything.

But it looks like his absurd investigation is not going to end any time soon.

After seeing what they have done to Trump, do you think that good people will be encouraged or discouraged from running for public office?

Of course it isn’t just politicians that are being targeted for this kind of thing.  You could literally spend years pouring blood, sweat and tears into building a business, and it can be destroyed in one moment by a single frivolous lawsuit.

And if you are a doctor, a lifetime of exceedingly hard work can be completely wiped out by one really greedy lawyer.

Look, every nation needs a legal system, and we do too.  But today our system is in desperate need of reform.  There are way too many lawyers, way too many lawsuits, and our entire society is rapidly becoming paralyzed by the misuse of legal power.

At one point I was optimistic that someday we would see some much needed reforms, but at this point I do not believe that it is going to happen…