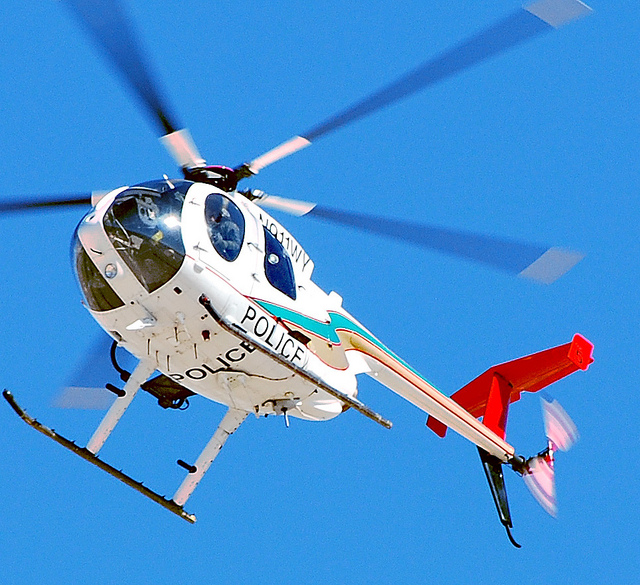 Official police records show, Officer Delzer arrived at the parking lot of the Harley Davidson dealership located at 5191 S. Las Vegas Blvd. around 10:40 p.m. where he assisted in the aerial deployment of two heavily-armed, heavily-trained, snipers, along with a courageous pilot into what appeared to be an urban war zone at the time.

Delzer’s timeline and the location of the deployment match up almost perfectly with a timeline analysis released by Intellihub just weeks after the shooting.

Sargent D. Callen of the LVMPD recounts the moments when Officer Paul Lourenco and he attempted to peer into the shooter’s Mandalay Bay hotel room windows from an aerial vantage point using Air 3.

“Once myself and Officer Lourenco identified where the broken windows were we made several passes at various speeds near the windows in an attempt to locate the suspect,” the Sargent’s report explains.

The Sargent and his pilot continued to make passes in Air 3 until SWAT made entry into and cleared both Mandalay Bay rooms 32-134, and 32-135 where the shooter reportedly fired several different rifles equipped with bump stocks from before taking his own life with a handgun as SWAT breached the room. As the report goes, Air 3 went on to evaluate reports of active shooters at other casinos located further north along the strip but kept coming up short with evidence, or so the carefully crafted report states.

“We made several low passes near the Bellagio, New York New York, Monte Carlo, MGM, and Paris,” he explained. “We saw no evidence of another active shooter at any of these properties and updated dispatch every time.”