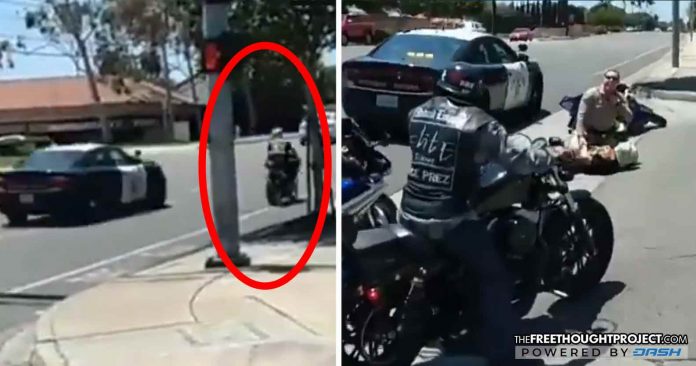 Rancho Cucamonga, CA — A family and community is outraged this week after they watched in utter shock as a California Highway Patrol officer rammed a man driving a motorcycle, causing him to crash and fly off of his bike. The entire incident was captured on camera.

On Sunday, a group of bikers planned a Memorial Day ride to honor fallen brothers. Cellphone video taken during the ride shows bikers stopped at an intersection in Rancho Cucamonga as a motorcycle and a CHP cruiser pass them by in what appears to be a traffic stop.

Seconds later, the CHP officer rams his cruiser into the motorcycle, sending the driver tumbling. After witnessing the take down, the group of bikers swarmed the cop and all hell nearly broke loose.

“You pushed him! You pushed him down! You slapped him down with the bike, and I have it on camera!”the person filming can be heard yelling as the cop places the man in handcuffs.

As the CHP officer handcuffs the man, one of the man’s friends moves in to pick up his motorcycle. But the officer shoves him and does not allow it. This move infuriated the crowd of bikers who all began revving their motorcycles in protest.

The video then cuts out. According to witnesses the man was brought to the hospital and then to jail.

The family and friends of the man riding the motorcycle that was taken out by the officer contacted CBS 2 News on Sunday to tell their side of the story.

One of the men riding in the group was Jose Figueroa who says the officer singled the man out and began acting aggressively toward him.

“He panicked, you know? Our brother panicked, and he got out the way and sped up, tried to get out the way, and the cop chased him,” said Figueroa. “We pulled up to the liquor store, and that’s when he rammed him.”

The victim’s wife, Desiree Garcia told CBS 2 that she thought her husband was going to die that day and there was no reason for it.

“From what I saw from the video, you know, I [saw] my husband’s brake going on,” Garcia told CBS2 News Sunday. “It looked like he was, he was trying to pull over, and the cop just hit him out of nowhere.”

If you watch the video closely, it does look like the man was attempting to pull over or had at least just discovered that he was being pursued by the officer. However, he was not given a chance.

“I couldn’t have lost my husband. I don’t know what I would’ve —” Garcia said as she began to break down into tears.

It is important to note that the man on the motorcycle should have pulled over immediately and the ramming incident may not have happened. However, in the eyes of his friends and family, it did not justify the near-deadly aggression.

“A lot of people believe the cop used excessive force,” said Figueroa. “He should not have done that. He should’ve done it in a more properly [sic] manner.”

Now, according to the family, they are planning legal action and the taxpayers of Rancho Cucamonga will likely be held to the fire for the actions of this officer.

If you’d like to contact the California Highway Patrol in Rancho Cucamonga to peacefully voice your concern over the video, you can do so at their Facebook page, here.

Berkeley County deputy James Vansant pulled a similar stunt in South Carolina last year, ramming a motorcycle twice with his cruiser. The strikes caused the motorcyclist, 30-year-old Robert Lee Clark, Jr. of Goose Creek, to crash. He was not as lucky as the man in the video above. He was immediately killed.