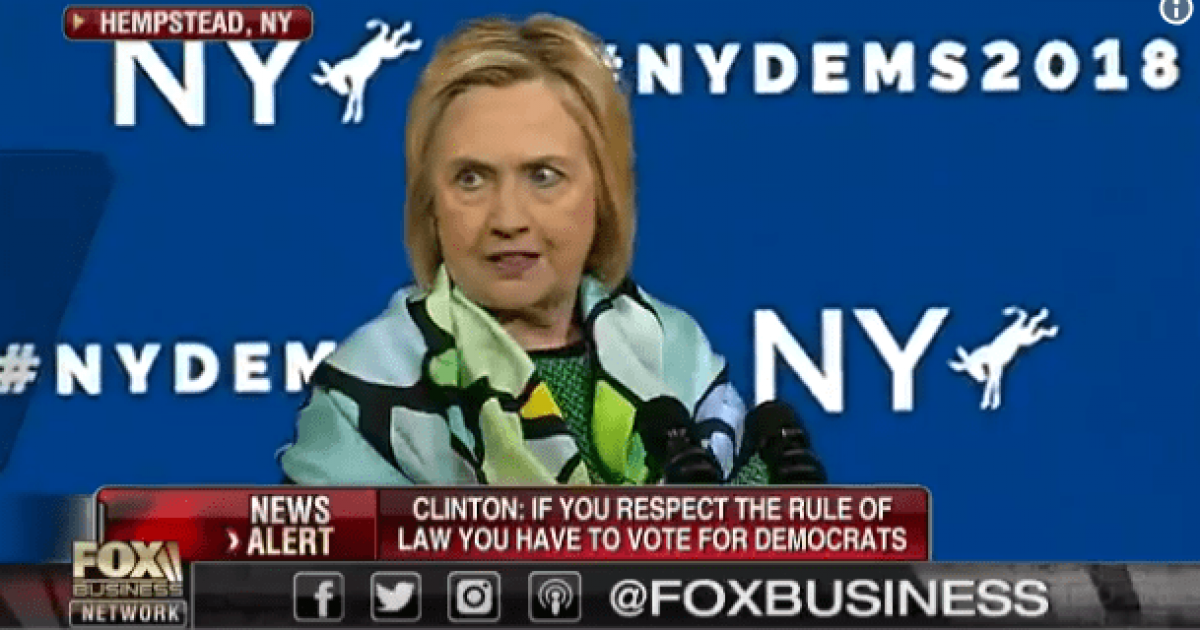 No, seriously, you just can’t make this stuff up.  The 2016 loser and former criminal head of the State Department, Hillary Clinton just declared that if people actually believe in the rule of law that they should vote Democrat in November.

“If you believe that standing up for evidence and reason and respecting the rule of law is critical to our democracy, you’ve got to vote for Democrats,” Clinton shouted at a New York convention of Democrats.

.@HillaryClinton: "If you believe that standing up for evidence and reason and respecting the rule of law is critical to our democracy, you've got to vote for Democrats." https://t.co/gmHyGhUboY pic.twitter.com/MX3JJP6JaS

Consider this is a woman embroiled in scandal and the evidence has demonstrated that she has committed crimes against the people.

Among her scandals are the ties and contributions to her Clinton Foundation, Benghazi, her cover for her husband’s adulteries and attacks on his victims, her Muslim Brotherhood ties and a host of others scandals over her political career.

On top of that, we have documented evidence of her crimes concerning her illegal email server, which was used to send and receive classified information in violation of federal law, which put our republic, not our democracy, at risk.

Let’s not forget that she is also married to a man who was impeached as president for lying under oath.

And one of the most recent bits of evidence came from Jay Sekulow of the American Center for Law and Justice (ACLJ).

Sekulow tweeted, “The @ACLJ just uncovered a stunning revelation about the extent to which the #Clinton State Department colluded with the #ClintonFoundation. You need to read this to believe it. ”

As part of our Freedom of Information Act (FOIA) lawsuit against the Deep State Department, we have been informed that the State Department has located – and will be forced to turn over to the ACLJ – literally thousands of documents to and about the Clinton Foundation, its subsidiaries, and its senior operatives during the duration of Hillary Clinton’s time as Secretary of State.

The shear volume alone – some 30,000 emails – debunks the specious assertion that there was any kind of firewall whatsoever between Clinton’s State Department and the Clinton Foundation.

These documents, only now being uncovered through our FOIA request and subsequent litigation, show extensive communications exchanged between Clinton or her senior staff at State Department and Doug Band – a senior aid at the Clinton Foundation and creatorof the Clinton Global Initiative (CGI).

In recent court filings, the State Department has revealed that more than 8,700 documents exist in Cheryl Mills’ and/or Huma Abedin’s files which contain the single search term, “Doug Band.” It is possible, and indeed likely, that each document consists of several pages placing the number closer to 18,000 pages or more.

The ACLJ has also learned through our litigation that another 22,000 documents exist in Cheryl Mills’ and Huma Abedin’s files (not including attachments) mentioning or referring to the Clinton Foundation or a related term referencing the foundation.

Yep, this is just the sort of woman people should be listening to when it comes to talking about the rule of law.

Furthermore, she needs a serious civics lesson, as most Democrats and some Republicans do to understand that the united States is a Republic, not a democracy.

Of course, the evidence and reason she is referring to are aimed at claims by Democrats, without either, at President Donald Trump over alleged Russian collusion.

Seriously, if we were to follow the evidence and reason, Hillary Clinton, her husband, Barack Hussein Obama Soetoro Sobarkah, James Comey, James Clapper and a host of others from the corrupt Obama administration would be in jail.  If we followed justice, they would be tried, convicted and summarily put to death.

Rusty Weiss of Mental Recession comments on the corruption in New York, mostly tied to Democrats.

You know who wasn’t at the Democrat convention in New York? Trump-hater former Attorney General Eric Schneiderman. He had to resign just weeks ago after an expose outed him as being a serial woman beater. (RELATED: Donald Trump’s Tweet from 2013 Predicted NY AG Downfall).

Here are few more examples from the Empire State:

People from both parties agree that New York is one of the most corrupt states in the nation led predominantly by Democrats.