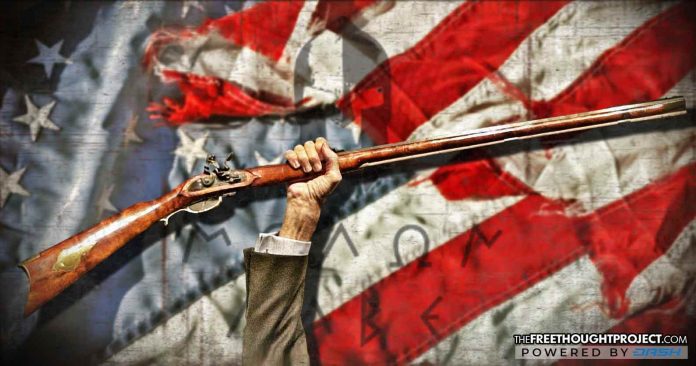 The state of New Jersey has become the latest to ban bump-stocks for firearms, and despite strict threats to owners who refuse to turn their newly illegal devices over to police, not a single resident has complied with the new law.

The legislation banning the popular A-15 accessory, Senate Bill 3477, went into effect immediately after it was signed into law by Gov. Chris Christie in January, and it gave residents 90 days to “voluntarily surrender any bump stock in their possession to a law enforcement agency.”

The bill criminalizes the possession or sale of “bump stocks,” which it defines as “a device designed to attach to a semi-automatic firearm in order to fire shots in rapid succession in a manner that simulates an automatic firearm.” This new law adds to an existing state law banning guns that have been deemed as “assault rifles.”

Despite the fact that New Jersey residents who are caught with bump stocks could face up to 5 years in prison and up to $15,000 in fines, reports have claimed that not a single bump stock has been turned in, even though the deadline to turn the newly illegal accessories over to police was last month.

New Jersey is not alone. Massachusetts became the first state to ban bump stocks earlier this year, and even though the state’s new legislation threatens violators with up to 18 months in jail, only four people have complied by voluntarily surrendering their bump stocks to police.

Bump stock bans have also been passed in Florida, Maryland, Vermont, and Washington, but have yet to go into effect. Given the immense success the bans have had in New Jersey and Massachusetts, it may soften the blow for police in other states who believe that residents will turn up by the masses to turn in a piece of plastic, just because the government said it is now “illegal.”

Mark Pennak, the president of the gun rights group Maryland Shall Issue, argued that until police begin providing a financial incentive for residents to turn in their bump stocks, they will likely continue to see low numbers. “You’re basically telling people to destroy their property. If you take someone’s private property, you have to pay for it,” he said.

“They bought them just because they’re fun to use, and that’s it,” Pennak added. “You’re criminalizing a plastic item, and sending people to prison for three years for it.”

While some local police officials claim that they believe the bump stocks are not being turned in by residents because they are not “a popular accessory,” statistics from the federal government estimatethat Americans spent $96.2 million on bump stocks between 2011 and 2017.

The new “War on Bump Stocks” was ignited by the mass shooting in Las Vegas in which suspect Stephen Paddock has been accused of killing 59 people and injuring 530 on Oct. 1, 2017. New Jersey’s legislation specifically lists the shooting as an example of why bump stocks should be banned. The bill states that “according to recent news reports, the rifles found in the gunman’s hotel room were modified with a bump stock.”

However, it should be noted that while police claim they found 12 rifles with bump stocks in Paddock’s hotel room, and the accessory then became the subject of the media’s wrath, it is still not clear whether the bump stocks were used or how they contributed to the carnage that resulted from the shooting.