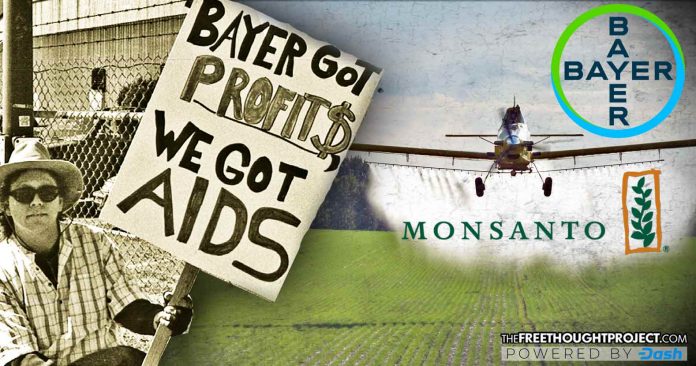 The Big Pharma giant Bayer has just won approval from the US Justice Department for the $62.5 billion dollar takeover of the agrichemical behemoth Monsanto. The deal, which was solidified on Tuesday, has many people on edge knowing that Bayer, a company with a sordid history of corruption is merging with Monsanto, the company who has made an empire with its pesticide, herbicide, and genetically-engineered seed empire.

As DW reports, as part of Bayer’s agreement with US antitrust enforcers, the German firm will be required to divest some $9 billion in assets. Regulators said they directed Bayer to sell off its entire cotton, canola, soybean and vegetable seeds businesses, as well as its digital farming business. It will also sell its Liberty herbicide, which competes directly with Monsanto’s product RoundUp.

Prior to this sell off of assets, government regulators voiced their fears that the merger of these two companies would hamper competition and be a detriment to both farmers and consumers. Although Bayer’s asset sales were the largest divestiture ever required by the United States, some concerns over this monopoly are still alive, and rightfully so.

Though Bayer established its reputation for the invention of aspirin, a more nefarious incident involving an HIV-contaminated drug to be administered to children suffering from hemophilia proved the corporation’s practices aren’t as noble as it would have the public believe.

In 1984, Bayer’s Factor VIII, used in the treatment of hemophilia, became contaminated with HIV — which the company became alerted to after a number of children became infected. In full awareness its medicine was tainted — and unable to sell Factor VIII in its compromised state inside the U.S. — Bayer asked for and received permission from federal regulators to sell the affected batch to Argentina, Indonesia, Japan, Malaysia, and Singapore after February 1984.

According to documents obtained by the New York Times, Bayer unit Cutter Biologic continued selling the tainted medicine despite knowing the potentially life-threatening risks to the children who would receive it. Cutter maintained in a written statement to the Times it had “behaved responsibly, ethically and humanely.”

The result of this sale of HIV tainted medication infected tens of thousands and killed thousands. Thousands of innocent children and adults have died at the hand of this corporation and no punitive action has ever been taken against them. On the contrary, the health department leaders who accepted the tainted drugs in Argentina, Indonesia, Japan, Malaysia, and Singapore were all imprisoned, while the FDA continues down its hellish path.

When asked about the sale of the tainted Factor 8 years later, Bayer responded, ”Decisions made nearly two decades ago were based on the best scientific information of the time and were consistent with the regulations in place.”

With the revolving door that is the FDA, the government was complicit in this conspiracy which is why no one was held accountable, in spite of all the deaths.

“These are the most incriminating internal pharmaceutical industry documents I have ever seen,” said Dr. Sidney M. Wolf, director of the Public Citizen Research Group.

On the other side of this mega deal is Monsanto, who is responsible for poisoning the world’s waterways and ecosystems with a known probable human carcinogen, glyphosate — the hallmark ingredient in its herbicide, RoundUp.

Internal company documents revealed in 2015, that Monsanto had tested RoundUp for potential toxicity for years but used the guise of proprietary information to force the Environmental Protection Agency into sealing those records. They knew it was dangerous but deliberately covered up their findings and brought the product to market anyway.

Independent research scientist, Anthony Samsel, obtained the documents through his senator’s office after having his Freedom of Information Act requests successfully thwarted for years. As he described from information found in those documents, “Monsanto misrepresented the data and deliberately covered up data to bring [glypohsate] to the market.”

Indeed, it has been Monsanto’s own skewed and faulty research on glyphosate that has allowed its approval for use on food crops by the FDA and EPA.

Monsanto’s body of falsified research and its willful poisoning of the human population on the altar of profit are tantamount to crimes against humanity. Given Bayer’s equally corrupt and deadly history, the idea of these two companies merging their power and influence is chilling, to say the least.