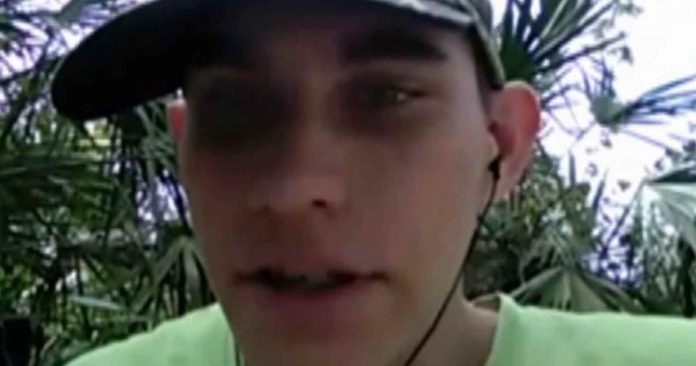 Parkland, Florida – Cellphone footage has been released that shows Nickolas Cruz in the hours before he opened fire on Marjory Stoneman Douglas High School. The disturbing videos give insight into a deranged individual who excitedly plotted the massacre and looked forward to the fame and notoriety it would bring him.

“Hello, my name is Nik, and I’m going to be the next school shooter of 2018. My goal is at least 20 people with an AR-15 and a couple tracer rounds,” Cruz said as he filmed himself before carrying out a shooting that killed 17 people.

“The location is Stoneman Douglas in Parkland, Florida. It’s gonna be a big event, and when you see me on the news, you’ll know who I am,” Cruz said. He then chuckled and said in a high-pitched tone, “You’re all going to die! Pew pew pew pew pew. Ah yeah. Can’t wait.”

In the next video, Cruz is wearing what appears to be a bright orange shirt, khaki shorts, black tennis shoes, and a black cast on his arm. With the camera aimed at the ground, he can be heard saying, “Today is the day. The day that it all begins. The day of my massacre shall begin. All the kids in school will run in fear and hide. From the wrath of my power, they will know who I am.”

“I am nothing. I am no one. My life is nothing and meaningless. Everything I hold dear I let go,” Cruz said in a monotone voice. In addition to a troubled past that included dozens of incidents in school and numerous reports to the police, Cruz was also reportedly taking antidepressants for depression and emotional issues.

Cruz recounted his plan for the shooting on Feb. 14, noting that he intended to take an Uber to the school before 2:40 p.m. with his gear. According to a report from the Sun Sentinel, Cruz was picked up by an Uber at 2:06 p.m. and dropped off at the school at 2:19 p.m. He then entered the freshman building at 2:21 p.m.

The school confirmed that Cruz exited the building at 2:28 p.m. and blended in with other students who were fleeing campus. Given that he may have set off more warning signs if he had been fully clothed in body armor when he was riding in an Uber or entering the school, the timeline gives him just 7 minutes to load his rifle, put on his body armor, shoot 31 people, discard the gun and the body armor and then exit the building.

While Cruz did not mention the presence of body armor in the video, he did mention it in a group chat on Instagram he shared details about the firearms he owned, made racist comments and shared his desire to commit mass murder, according to a report from CNN.

In one message, Cruz wrote, “Guys I got paid 330. I am buying body armor.” He then posted receipts that documented his purchase and asked the group if it was legal to wear body armor in school. When a member asked why he wanted to know, Cruz replied, “School shooters.”

Cruz is currently facing life in prison, and the videos were released by prosecutors on Wednesday. Andrew Pollack, the father of one of the girls who was killed, told the Sun-Sentinel that at the very least, the videos should serve as evidence that Cruz is not eligible for an insanity plea.

“It just shows this kid was competent. This whole thing was premeditated murder. This kid knew exactly what he was doing,” Pollack said.

While Stoneman Douglas High School has yet to release surveillance footage of the shooting, the videos of Cruz plotting the massacre are the first evidence the public has been given to show that Cruz was the culprit.

One of the most notable things about the videos from Nickolas Cruz is that he believed his life was meaningless and hoped that by carrying out the massacre, he would gain the fame and notoriety that mass shooters before him have received. That alone serves as a troubling reminder that the mass shootings that have happened in the United States in recent years have much deeper roots than what can be solved by passing more laws.