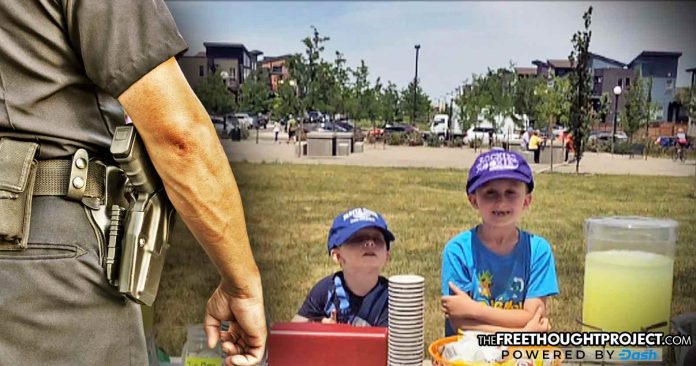 Common sense, among those who work inside the state, is a rare commodity. Agents of the state, like those who work in law enforcement, often become so blinded to reality by ‘just doing my job’ they throw logic and reason to the wayside, choosing authority and force instead. Nothing highlights this blind order following quite like police tormenting a two young boys for the crime of selling lemonade without a permit.

Jennifer Knowles, mother of three boys, wanted to instill a bit of entrepreneurial spirit in her sons over the Memorial Day weekend. So, Knowles and her husband decided they would have her four and six-year-old sons run a lemonade stand.

Knowles told Denver 7 that she remembered having lemonade stands when she was a kid and she wanted her kids to do the same.

“I want to teach my kids about being an entrepreneur and having your own business. My 6-year-old got his little toy cash register out that he got when he was about two or three and he was learning how to interact with customers and about customer service,” Knowles said.

On top of teaching her children how to be entrepreneurs, Knowles said she wanted to teach them about giving to those less fortunate as well.

“We here are very fortunate and we forget that many kids in the world are not as fortunate as we are in Colorado or in the country, and so I wanted to teach them how to donate money to a charity,” Knowles said.

Knowles explained that her two sons picked a child in Indonesia to whom the proceeds from the lemonade stand would provide food and fresh water.

“They picked a little 5-year-old boy from Indonesia with siblings, two siblings, kind of like them,” she said.

The plan was set. The boys then set up their lemonade stand in the park across the street from their home and went to selling.

“They got a lot of people coming and praising the boys and telling them that they were doing a great job,” Knowles said. “That was so good for my boys to hear and for them to interact with people they’ve never met before in a business way.”

However, their good deed and entrepreneurial spirit would soon be squashed as police showed up just an hour and a half into their venture.

“The police officers came over and they said that because my boys and I did not have permits for a lemonade stand they shut us down and we had to stop immediately,” she said. “My boys were crushed. They were devastated. And I can’t believe that happened. I remember as a child I always had lemonade stands and never had to worry about being shut down by the police officers. I mean that’s unheard of.”

When her children saw the police coming toward them, they naturally got scared.

Knowles explained that the police were nice but they were still shutting them down because someone had reported the children for selling unlicensed lemonade. In other words, they were just doing their jobs.

After being shut down for selling lemonade without a license, Knowles did some digging and found out that there is actually no law explicitly prohibiting lemonade stands. However, there were no laws explicitly permitting them either—meaning that these officers could’ve used their discretion and allowed the kids to continue selling, but they did not.

City officials, however, did say that they will shut down lemonade stands if they get a complaint.

“If our inspectors go to a lemonade stand, it means we’ve received a complaint, and generally complaints stem from high levels of activity or noise that disrupt neighbors,” Communications Program Manager Alexandra Foster told Denver7.

Sadly, Knowles has now felt the wrath of government regulation and issued a warning to other parents.

“I want parents know that they need to be aware that if their kids want to have a lemonade stand there could be repercussions like there with my kids,” Knowles said.

While Knowles’ children escaped without a fine, other children who’ve dared to sell the cool lemony goodness without a permit haven’t been so lucky.