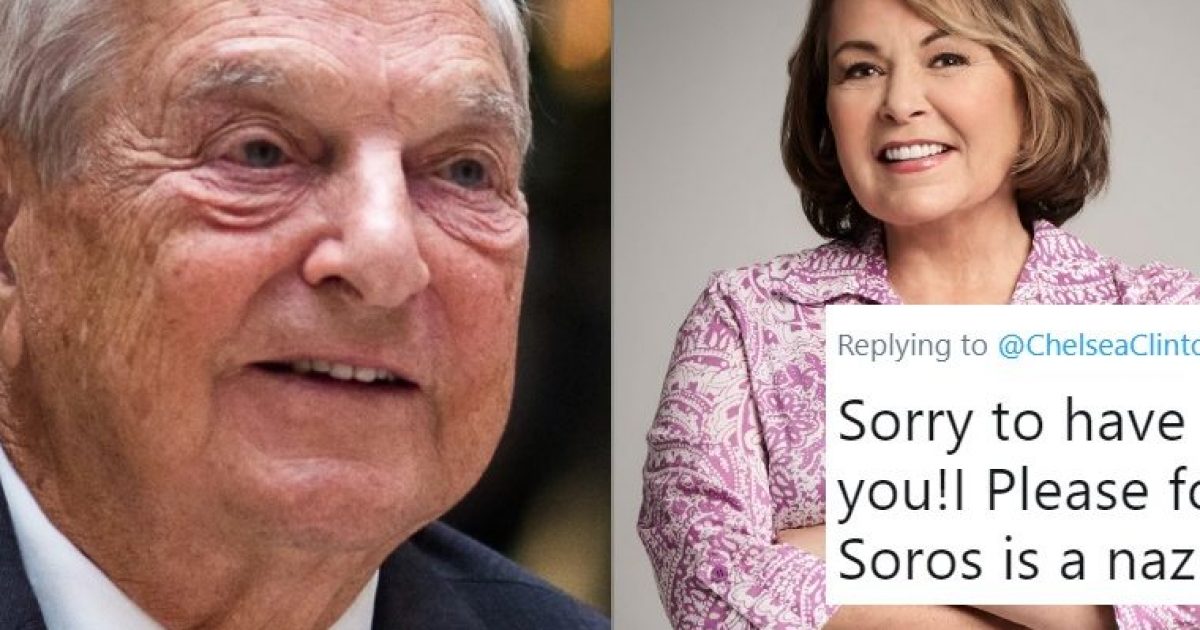 I’m not fan of Roseanne Barr, but she apparently has been caught in a politically correct firestorm after she tweeted about Valerie Jarrett and George Soros.  In doing so, she not only got canned from ABC, but she got a lying response from a Soros spokesman who walked by Soros’ own claims that he collaborated with the Nazis to confiscate property of Jews.

First, consider that Roseanne tweeted out that if the Muslim Brotherhood and the Planet of the Apes had a baby, that baby would be like Valerie Jarrett.

Barr’s tweet was clearly targeted towards Jarrett.  However, many jumped on her as a racist to which she quickly responded.

ISLAM is not a RACE, lefties. Islam includes EVERY RACE of people.

That’s exactly right, and seriously, what is wrong with tweeting about the ideologies there.  After all, Planet of the Apes is about totalitarianism just as much as Islam is.

Yet, that didn’t stop some poor little snowflakes from chiming in and whining about her tweet.

How in the world does @ABC & @Disney justify this?

Roseanne literally just said that Valerie Jarrett, who was Senior Advisor to President Obama, is like the Muslim Brotherhood & Planet of the Apes having a baby.

This is the gross normalization of bigotry in America. https://t.co/zPYE1nBGPA

Bigotry?  Seriously Shaun?  And so is your miserable tweet.  You sound just like Communist Van Jones, who blamed the Trump White House for a “moral collapse” that allowed such “bigotry.”

Here’s what Jones had to say on Tuesday on CNN’s “Newsroom.”

“Some things apparently are more important than money, even to a big corporation like ABC-Disney, and that is very heartening because we’ve been in a moral freefall for at least three years. To my point of view, one of the great things is — it is, in fact, important that red-state America be better represented in the media. But they can have a better representative than a rank bigot who is a conspiracy theorist and who is trashing good people in this country. Valerie Jarrett served with distinction and through some of the toughest moments of American history, whether you’re talking about the great recession, whether you are talking about Osama bin Laden, there were so many times Valerie Jarrett was there to help us to steer and steady the ship.”

“I’m ashamed to say this, I thought she was probably gonna get away with it. I was as shocked as anybody else when there was actually consequences. Consequences for racism in America? I think you’re starting to see now whether it’s Starbucks and what they did today trying to be on the better side of this conversation or ABC-Disney, it could be that this moral collapse inside of our political system, and especially inside the White House, is being counterbalanced now by people in mainstream media, mainstream corporations who say we don’t want to live in a country where decent people can be attacked for no reason with despicable terms. It not a joke. It’s not funny. It’s the dehumanization of people of color, calling us animals, referring to us as apes and animals, that has a history leading to all kinds of violence, justifying exclusion from businesses and universities. This is part of a long and nasty history and apparently, ABC-Disney doesn’t want it to be a part of our future. And I’m glad that in some places in America some things are more important than money and I’m glad.”

Well, it’s pretty funny coming from a known Commie, one who has no problem throwing the bigot and racist words around at others and propping up one of the most unethical and immoral administrations in US history.

From Channing Dungey, President of ABC Entertainment: "Roseanne's Twitter statement is abhorrent, repugnant and inconsistent with our values, and we have decided to cancel her show."
There was only one thing to do here, and that was the right thing.

Does anyone still watch ABC anymore?

Still, Roseanne made her way over to the Clinton family and tweeted about the ties to Nazi collaborator George Soros.

Chelsea Clinton did respond, and I have to say that she was polite in her response.

Good morning Roseanne – my given middle name is Victoria. I imagine George Soros’s nephews are lovely people. I’m just not married to one. I am grateful for the important work @OpenSociety does in the world. Have a great day! https://t.co/mXokiTEwN7

Sorry to have tweeted incorrect info about you!I Please forgive me! By the way, George Soros is a nazi who turned in his fellow Jews 2 be murdered in German concentration camps & stole their wealth-were you aware of that? But, we all make mistakes, right Chelsea?

Ouch!  OK, just because dad was doesn’t mean that son is, but the point was made.

However, not only was she right about who Chelsea married, which is ironic that she defends her rapist father and child rapist defender mother, but Roseanne also did point out the truth about George Soros and his Nazi collaborations to which Soros was apparently offended.

In fact, he was so offended, that he had a spokesman respond to Roseanne’s truth claims.

A Soros spokesman said Roseanne’s comments were “insulting” and “an affront to Mr. Soros and his family.”

“[Mr. Soros] did not collaborate with Nazis. He did not help round up people. He did not confiscate anybody’s property,” the spokesman claimed in a statement. “Such allegations are insulting to the victims of the Holocaust, to all Jewish people, and to anyone who honors the truth.”

Then how insulting were they to Mr. Soros in 1998 when he told the world on 60 Minutes that he actually did all that?

In 2016, we reported on the infamous interview.

In a 1998 interview with CBS’ Steve Kroft, Soros admitted that he participated in the confiscation of Jewish property under the Nazi occupation. He also explained that he had no remorse for what he had done, and that if he had not participated, somebody else would have done it anyway.

Steve Kroft: My understanding is that you went out with this protector of yours who swore that you were his adopted godson. Went out, in fact, and helped in the confiscation of property from the Jews.

Steve Kroft: That sounds like an experience that would send lots of people to the psychiatric couch for many, many years. Was it difficult?

George Soros: No, not at all. Not at all. Maybe as a child you don’t–you don’t see the connection. But it created no problem at all.

Steve Kroft: No feeling of guilt?

Steve Kroft: For example that, ‘I’m Jewish and here I am, watching these people go. I could just as easily be there. I should be there.’ None of that?

George Soros: Well, of course I could be on the other side or I could be the one from whom the thing is being taken away. But there was no sense that I shouldn’t be there, because that was–well, actually, in a funny way, it’s just like in markets–that if I weren’t there–of course, I wasn’t doing it, but somebody else would–would–would be taking it away anyhow. And it was the–whether I was there or not, I was only a spectator, the property was being taken away. So the–I had no role in taking away that property. So I had no sense of guilt.”

In a separate interview, Soros actually called these years, the “happiest” of his life.

Liars are always gonna lie, aren’t they George?  Such is the case with Soros.

However, this is a good lesson.  There was nothing racist in Roseanne’s tweets no matter how much may not like her or even disagree with her. There was only truth.  Yet, virtually the same type of thing that is happening to her is happening to Tommy Robinson across the pond.

It’s time that freedom loving Americans wake up and not back down in the face of these totalitarian anti-Americans who wish to pummel and browbeat those who dissent from their politically correct model.

Article by Sons Of Liberty Media