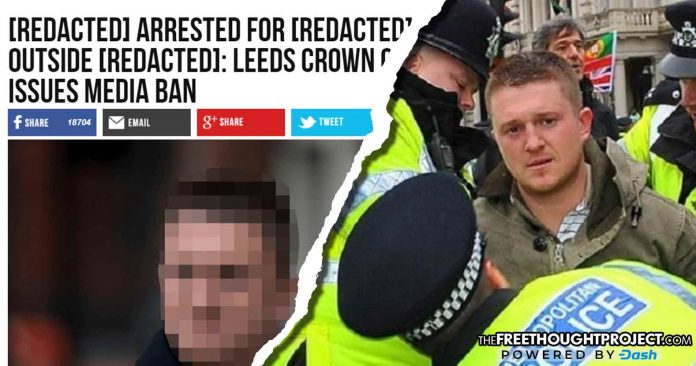 London, UK – Founder of the English Defense League, and staunch British nationalist, Tommy Robinson was arrested by British authorities on May 25 outside of a Leeds Crown Court. He was holding a Facebook live stream where he was reporting on the trial of 29 defendants who were facing charges in relation to child sex abuse and neglect. After the arrest, a the judge issuing a blanket ban on any UK media from reporting on the case.

Robinson, who is a strong proponent of a strong nationalist British identity, has spoken out publicly against Muslim immigration to the UK, while critics maintain he is a bigot and racist. Regardless of his views, however, he should be allowed to say them without fear of arrest. But this was not the case.

After roughly an hour of broadcasting, Robinson was arrested for incitement and breach of peace. During his arrest Robinson denied the charges against him, claiming that he did nothing wrong. Robinson attempted to film defendants as they entered the courthouse and discussed the case in a video that was viewed more than 250,000 times.

Robinson was charged and sentenced to 13 months in prison for contempt of court within five hours of his arrest. His sentence includes 10 months for contempt of court, in addition to three months for breaching the terms of the previous suspended sentence. Additionally, the judge put in place a court order preventing any reporting on Robinson’s arrest and subsequent court proceedings.

United Kingdom law specifies the crime of contempt of court as including speeches and publications that allegedly risks the “course of justice” in which the ongoing proceedings could be impeded or prejudiced. Robinson was sentenced for committing contempt of court in Canterbury last year.

In that case last May, Judge Heather Norton sentenced Robinson to three  months imprisonment but suspended the sentence for 18 months with a stipulation that he would not commit further offenses. Norton said the issue was not about free speech rights but about ensuring justice by making sure a trial is fair and not being tainted by irresponsible and false reporting.

Robinson originally broadcasted his work on Twitter but was recently banned from the platform. Since he launched the English Defense League, he has been arrested multiple times during fights and demonstrations. In 2014, he was sent to jail for mortgage fraud.

Tommy Robinson’s producer Caolan Robertson said that Robison was just reading information that was already made publicly available. Robertson even said they were careful and spoke in a way to not risk being held in contempt of court. Published videos show Robinson walking past the accused rapists and goading them.

Over the weekend hundreds of people gathered at the gates of Downing Street to protest the right-wing activists arrest and government censorship of his case. The Guardian reported that supporters were seen carrying placards reading “#FreeTommy” and shouting “shame on you.” Supporters of Robinson in the US, such as controversial comedian Rosanne Barr, labeled his prison sentence as a “death sentence.”

he has tried to report on rape gangs being protected in UK. He was just arrested-which is a death sentence-please get involved! it's sick pedo shit

A Change.org petition demanding that Robinson be freed has received more than 500,000 signatures as of Wednesday, while the hashtag #FreeTommy began trending on social media to raise awareness about the incident, largely due to the overt censorship of British media organizations.

Right-wing Dutch opposition leader Geert Wilders posted a video, filmed outside the UK embassy in The Hague, in which he denoted Robinson’s sentence as “an absolute disgrace,” and called out the ever-increasing grip of government censorship by noting that freedom of speech was being violated all over Europe.

“The lights of freedom are going out,” he said. “The authorities are trying to silence us.”

While U.S. websites ignored the ban on reporting about the Robinson case, with many conservative leaning outlets highlighting the ominous nature of government censorship, Breitbart, which has a London branch, complied with the order. You can see just how extensive the censorship is in the screen shot below. UK news outlets, the Independent and Leeds Live went to court to legally challenge the gag order which was subsequently rescinded by the court on Tuesday.

While the free speech of others may be grossly offensive to some, the criminalization and government censorship of offensive speech or “hate speech” only serves to embolden and galvanize support and increase publicity, thus popularity for those being censored.

Citizen journalism and social media allow for a wide array of disparate ideas, thoughts, analysis and opinions to be propagated to the masses, which is why we have seen governments across the world work diligently to regulate social media.

Essentially, those that have traditionally controlled the informational gates of society have lost their monopoly on what information society is allowed to see, hence seeing a vast censorship regime beginning rolled out under the auspices of “keeping you safe.” This can clearly be seen as a tool to regain the ability to more efficiently socially engineer society as the plutocratic oligarchy has always done.

“I Disapprove of What You Say, But I Will Defend to the Death Your Right to Say It” – Friends of Voltaire

Atheists trying to remove God strike out, AGAIN!
April 10th, 2021 The Real Side With Joe Messina

The Nazification Of The United Kingdom Is Almost Complete – The People Must Push Back Now!
April 10th, 2021 Sons of Liberty Media

Hordes Of Demoralized Police Officers Are Quitting Their Jobs, And America’s...