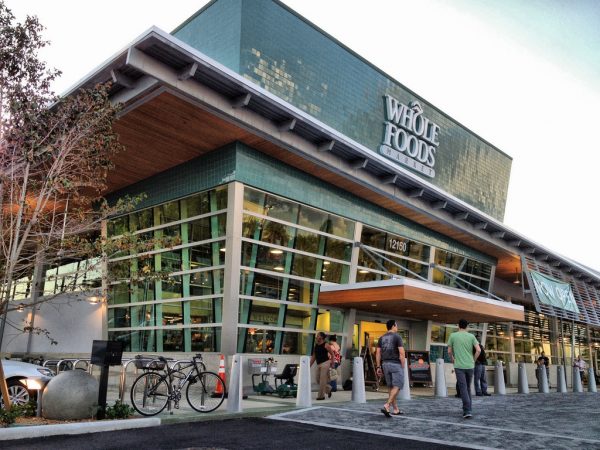 (Natural News) After being purchased by dishonest globalist Jeff Bezos — the same “Dr. Evil” anti-American creep who runs the fake news Washington Post — Whole Foods Market is now reversing five years of promises to consumers by suspending its GMO labeling promise. This means Whole Foods will continue to sell unlabeled GMOs while fraudulently insinuating to customers that its stores sell no GMOs whatsoever.

Back in 2012, when Whole Foods was desperately trying to quell customer concerns over genetically engineered ingredients found in thousands of grocery items sold at Whole Foods Market stores, Natural News released exclusive undercover video from the “Organic Spies,” exposing how Whole Foods deliberately trained its employees to lie to customers about GMOs. With other groups like the Organic Consumers Association joining the effort to expose Whole Foods’ GMO deceptions, the grassroots outcry against Whole Foods was rapidly expanding, and the retailer scrambled to get in front of the GMO labeling issue to try to comfort customers.

In early 2013, the retailer announced it would adopt a “full transparency” GMO labeling policy by 2018. This March 8, 2013 press release from Whole Foods claimed, “[B]y 2018, all products in its U.S. and Canadian stores must be labeled to indicate if they contain genetically modified organisms (GMOs). Whole Foods Market is the first national grocery chain to set a deadline for full GMO transparency.”

“We are putting a stake in the ground on GMO labeling to support the consumer’s right to know,” Whole Foods Market CEO Walter Robb said in 2013. But in reality, the fraudulent corporation systematically moved to put a stake through the heart of GMO labeling, all while deceiving its own customers for the last five years by pretending it would require clear, transparent GMO labeling on all products sold at its stores.

That promise has now been exposed as not just a heinous lie, but a horrible betrayal of its customer base.

Whole Foods halts its program in “weasel letter,” claiming it will now obey the Monsanto-driven USDA

“Whole Foods is pulling back on its plan to require GMO labeling for all foods in stores by September,” Ag Web reported earlier this week. The article references a new “weasel letter” sent to suppliers to Whole Foods, describing how the food retailer is quietly trying to weasel out of its commitment to its customers.

“As the USDA finalizes the federal regulation in the coming months and the food industry assesses the impact, we do not want our policy to pose further challenges for you and your businesses,” the letter stated, as reported by Ag Web. That same letter promises “further updates and timelines” but clearly betrays the 2013 announcement of “full transparency” from Whole Foods.

In just five years, in other words, Whole Foods has gone from “full transparency” to “we’ll let the USDA / Monsanto cabal tell us what to do.” This is no surprise, given that in 2016, Whole Foods was caught lying to its own customers about its strong support for the Monsanto-pushed GMO “fake labeling bill” in the U.S. Senate. Whole Foods, in other words, has been cozying up to Monsanto for years.

The USDA, of course, is a reckless, corrupt anti-science front group for pesticide manufacturers like Monsanto and DuPont, and the USDA has all but declared the new definition of “GMO labeling” will consist of nothing more than a hidden “bioengineered ingredients” statement somewhere on the manufacturers’ websites (not on the product label itself). In other words, the USDA is soon going to announce that “GMO labeling” means NOT labeling GMOs on products, and Whole Foods has all but declared it’s going to conform to the USDA’s decision even if it means breaking its five-year promise to consumers.

Watch for Whole Foods to lie to its customers yet again in late 2018, falsely claiming it has implemented a “GMO labeling program” that requires no labeling whatsoever on the products it sells. This is what corporate America has come to as evil globalists like Jeff Bezos turn once-trusted organizations like Whole Foods and The Washington Post into hated cesspools of deception and fraud. With this decision, Whole Foods is essentially committing corporate suicide, announcing to the world that when it says “full transparency,” it really means lying like crazy to its own customers.

Whole Foods has become the Enron of the grocery industry.

To all health-conscious consumers who used to shop at Whole Foods — like I did, too — you’re really getting a full taste now of the pure evil of Jeff Bezos, Amazon.com and the Washington Post, all of which are engaged in deep acts of deception, violating public trust or even endangering the health of the public without seeming to have any regard whatsoever for its own customers.

Whole Foods, for example, knowingly sold lead-contaminated products to the public and refused to halt the unethical practice, even after I brought certified lab test results to their executives and offered to test their products for free in order to protect the public. Then Whole Foods attacked my research for me going public with the truth about the contamination found in their products.

Just as the Washington Post has become fake news, Whole Foods is now a fake health food retailer. There’s nothing particularly healthy about Whole Foods anymore… except, of course, its own greed-driven profits. That priority puts Whole Foods in the same category of evil, powerful greed as Monsanto itself, a poison-pushing pesticide and herbicide manufacturer whose toxic molecules are present right now in a vast array of “fake health” products sold by Whole Foods. (I run a mass spec food science laboratory. We have the scientific evidence to back this up. Read my No. 1 top-selling science book Food Forensics for more details.)

Whole Foods is just as evil as Monsanto and Google

In summary, Whole Foods is an evil corporation run by an evil globalist who cares nothing about its own customers. The company only cares about profit, and a shockingly high portion of that profit comes from selling unlabeled GMOs to customers who have been systematically deceived by Whole Foods’ elaborate lies.

To the frustration of many of us, it seems that nearly all the businesses that once claimed to be working for humanity — remember when Google used to advocate “Do no evil?” — have become infested with evil. Jeff Bezos, in particular, has emerged as a destroyer of worlds, gutting every institution he acquires, shredding its credibility to maximize profits while deceiving the public. In fact, what Whole Foods just did with GMO labeling, the Washington Post has already done with news: They’ve gutted public trust, deliberately lied to their own consumers and made the United States of America a more desperate, sad place where people are losing trust in everything they once honored.

When the millions of Whole Foods customers learn the truth about this GMO labeling reversal, some of them are going to go ballistic with rage. And they have every right to be angry, given they’ve been lied to for half a decade by a corporation that just stabbed them all in the back.

What treachery is Bezos working on next, I wonder? AI drones that buzz your home with covert cameras powered by facial recognition technology that’s leased to local police in order to run a “Minority Report” police state regime? Yep, that’s not even science fiction. It’s actually a Jeff Bezos surveillance product called “Rekognition,” and Bezos is right now working to license the creepy tech to government authoritarians.

No doubt he’ll soon install police state cameras in Whole Foods stores to track the facial expressions of his own customers as they realize they’re all being royally screwed by the fake GMO labeling promise. Customers who disapprovingly frown will be quietly dropped from Amazon Prime, so make sure you smile, even if it hurts.