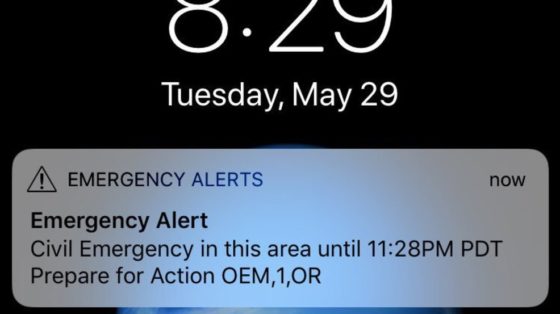 A glitch in the government’s system sent out a cryptic warning to residents living in Salem, Oregon, and surrounding areas. The head of Oregon’s emergency management agency has since apologized, but that was too little too late after many were left in a state of panic.

A cryptic emergency alert was forced out to cellphones in and around Oregon’s capital city, displaying the words “Civil Emergency” and “Prepare for Action,” but carrying little other information. Andrew Phelps said late Tuesday that a technical glitch had cut off the crucial information in the alert. There were elevated levels of a natural toxin in a local reservoir. Children and people with compromised immune systems have been told not to drink tap water in the Salem, Oregon, area after an algae bloom caused the spike.

Wednesday morning Cole Mahaffey, a Salem resident, set down a case of bottled water he was carrying down the sidewalk and described the uneasy feeling of seeing the first alert arrive on his phone, with an ominous warning but no other information. “It almost made me not want to go outside,” Mahaffey said, adding that the alert caught him at the gym and that he had interrupted his exercise routine to ask the staff at the front desk if they knew what it was about. “I didn’t know if there was something going on in the area, or if there was a shooter, you just had no way of knowing.”

“The integrated public alert warning system inadvertently defaulted to a generic message,” Phelps said in a video posted on the social media by the Office of Emergency Management. “I apologize for the confusion and the anxiety this incomplete message has caused.”

Following a false alarm sent out by Hawaii officials in January warning of an incoming ballistic missile, the incident marked a high-profile glitch in government authorities’ use of emergency alert systems. Phelps said Oregon’s cryptic message had also been broadcast via local television stations, likely heightening the panic.

The government’s emergency alert systems are capable of pushing messages directly to every cellphone in a given area even if users haven’t subscribed or downloaded an app.

Officials sent a second message 31 minutes later with more information about the contaminated water and a link to a municipal website, which briefly crashed under the stressful load of people desperately looking for information.

Water is now selling out in supermarkets in Oregon as a result of the algae in the government’s water system.